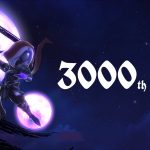 You are reading
3000th Duel, The Wise Ones DLC Review

With a plethora of Metroidvanias to play, how does developer NEOPOPCORN’s 3000th Duel stack up against the competition? Its recent free DLC, The Wise Ones, is said to add new areas, items, and more to the indie game. According to the developer, gameplay tweaks were also implemented based on community feedback. This action-platformer is tempting for its $15 price tag and there is some fun to be had. However, my time with 3000th Duel got very stale, very fast.

3000th Duel released in late 2019 for PC and the Nintendo Switch. In August of 2020, NEOPOPCORN released the free title update The Wise Ones with various improvements and tweaks. According to the developer, The Wise Ones DLC expands the story, adds new areas and items, increases the level cap from 99 to 199, includes a monster and item archive, and brings a New Game+ mode. Improvements have also been made to loading times, Japanese to English translation, and a few other quality of life features.

3000th Duel follows a masked hero with no memory as he wakes up in a mysterious fantasy world. Along his journey, he’ll begin to gather his memory piece by piece, which paints a broad stroke of a world that once was. Despite the supposed expanded story, I found it hard to genuinely care about what’s going on. It doesn’t help that the bits of memories you will pick up are just generally uninteresting. They’ll recall a glimpse of a past event that attempted to build its lore, but I couldn’t get myself to care during my 10+ hour playthrough. Instead, I was more interested in its other core aspects. This Metroidvania emphasizes flashy action, exploration, and RPG mechanics that tailor to a few different play styles. 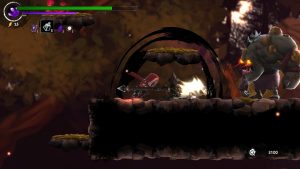 The RPG aspect is akin to the Dark Souls series. Players defeat enemies and gain a currency called Karma. You can spend it to increase your health, strength, agility, and magic. If you end up dying in the middle of a dungeon, you’ll lose your current pool of Karma. But, again, similar to Dark Souls, you can reclaim the lost Karma by reaching the same area where you were killed. As you level up, you’ll obtain skill points to use on an expansive skill tree. Enhancements on the skill tree unlock by gathering abilities you pick up as you explore.

Some ways into the game, I found the double jump ability, which opened up some more skills for me to buy such as increasing my defense stat. I particularly enjoyed this section of the game because of the freedom to choose which skill I wanted to upgrade. The game gives you a wide breadth of skills to unlock and each adds to the combat gameplay enough to matter. Not much can be said regarding the platforming, but you’ll be spending more time fighting enemies than completing platforming obstacles anyways. While the game is easy in the first handful of hours, monsters and bosses get noticeably tougher as you progress. Even when I gave attention to grinding some levels, I still had some trouble with end-game boss fights.

Ways To Play In This Metroidvania

Players can wield a sword, greatsword, or a lance that have different move sets. Greatswords do tremendous amounts of damage but are generally slow. Regular swords are quick and lances are great for long-range attacks. Holding down the attack button gives each weapon a special, stronger attack. Hitting enemies will fill out your magic gauge, which is assigned to a second attack button and deals massive damage to enemies. Since there are a varied amount of enemies, 3000th Duel allows you to weapon switch mid-battle and adjust to any fight that comes your way. The combat is simple and plays well for the most part. I wasn’t having an incredible time with it, but I enjoyed what I was able to do with my repertoire of weapons. 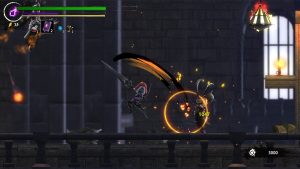 Lastly, the main protagonist will obtain Occults, which is another tool for attacking. One of my tried and true Occult powers throughout the game was a giant fist that came in punching enemies. It was fast and did a decent amount of damage. If I triggered the Occult fist while in the air, it would keep my character airborne, giving me time to do another string of air attacks or dash out of the way. When it comes to magic and Occults, both can be replenished with items at any given time. 3000th Duel does a good job of giving the player options to approach battles how they want.

Dashing is also limited in this game with a meter. The dash meter refills pretty quickly, so I never felt hindered in battles. All of the combat mechanics work together to deliver a pretty satisfying experience. Using them towards boss fights was where I had the most fun with the game, but it’s the moments in between that felt like a slog to get through.

Exploring New Areas Are Quite Boring

Going from location to location was surprisingly boring. The game uses a 3D cartoon art style with 2D backgrounds to highlight its grim, fantasy world. Some explorable levels included ominous castles, dangerous forests, and even a desert area. However, level designs throughout the game are incredibly unimaginative. Nearly all places lacked an identifying feature that made them stand out. This is also compounded by the fact that the game’s music is completely forgettable, at best. Tracks for similar-looking areas are reused and don’t even loop into itself to avoid momentary silences. The track plays, fades out, at least 5 – 10 seconds of silence passes by, then the song starts up again. It’s this level of detail that makes backtracking tedious. Two additions that should have come with The Wise Ones was more music and meaningful environmental storytelling.

To add to this, the dash meter completely hinders quickly traveling through previously visited areas. The game does include fast travel warp points, but I quickly became annoyed when the place I needed to get to was on the other side of the map from the closet warp point.

Traveling to a new location wasn’t nearly as exciting as seeing the different amount of enemies I would encounter. While the graphics reminded me of current era mobile game, the enemy designs are quite fantastic. Very rarely did I come across the same enemy, which was impressive considering how many locations there are in the game. Most monsters had original looks that fit the area they were in. Dark forests included goblins, ghosts, and trolls. Haunted castles harbored skeleton warriors and reapers. The standout enemy designs, however, would have to go to the bosses. Their looks gave a lot more personality to the bland world of 3000th Duel.

Ambitious, But Misses The Mark 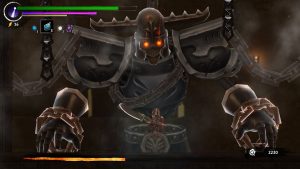 3000th Duel doesn’t have enough to offer a great Metroidvania experience. While the $15 price tag is not steep, I’d have a hard time recommending it. The game is not bad by any means, but it’s not great either. There’s not a lot of incentive to keep playing when the story and its world is dull. The shining beacon is in the moments of combat against bosses and leveling up your character. The additions brought by The Wise Ones DLC seemed promising. 3000th Duel and its free DLC’s attempt is admirable, but it gets lost in its uninspiring game design.