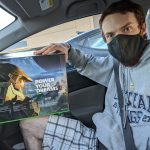 You are reading
Xbox Series Launch is One for the Books

Xbox fans waited long enough for this. Microsoft’s Xbox Series X and S are officially available for purchase. Despite how things turned around in the end, last generation was the worst Xbox generation. As much progress Phil Spencer and company made after last generation’s lacking start, the Xbox One never fully caught up to the PlayStation 4’s lofty milestones. Now with a new console, expanded platforms to play on, and a small army of game studios, the fourth Xbox generation has begun.

My First Day with the Xbox Series

Yesterday did not go as planned. I missed out on preorders because I did not preset my mailing address when preorders launched. At best, I thought I would get an online order placed for either Xbox Series entries. With some luck, maybe the console would arrive by Friday. I did not expect to have the tiny fridge by morning, but sometimes, your roommate is on the ball.

He woke me at 6:30 saying Walmart has three in-store and opened at 7:00. We got down there around 6:45, and there were three guys ahead of us. Half of them camped out since midnight, and they said the employees told them they had four. Said roommate, knowing full well that I needed an upgrade from the original Xbox One, promised me first dibs if true. It was, in a reverse monkey’s paw kind of way. Walmart had four Series X’s, and four Series S’s. One of the three before us wanted a Series S, so the rest of us took the Xbox Series X’s, and stepped into the powerful future.

I’m not just talking powerful, I’m talking god-like. Just having my ship in Star Wars: Squadrons load in with the hangar was a great sign. Normally, I’d have to wait a few seconds for the ship to show. Sure, it’s a small change, but a quite welcome one. The bigger changes, as expected, were in the enhanced games. When rummaging through your library, now you can sort by the release console. However, if a game has an optimization, that game will show under Xbox Series X or S. For example, Obsidian’s Grounded and Rare Ltd.’s Sea of Thieves each have optimizations that improve load times, graphics, and frame rate. Both games clearly benefit, but the latter is far more noticeable.

Of every Sea of Thieves update I’ve written about, this is the best one by far. On the Xbox One, Sea of Thieves normally took a loop to a loop and a half of this to load into the game. Tens of tips and screenshots would fly across the screen while I would scroll through my phone, waiting to load in. Even when I loaded in, islands would be blurry messes until I docked. No more. Now it takes about ten to twenty seconds to load in, and I can pinpoint every detail on a far off island. None of this even touches the game’s most beautiful part: the sea. The game’s namesake has never looked better, which is pretty hard to top.

So What’s New (to Play) on the Xbox Series Consoles?

The bad news is, due to Halo: Infinite’s delay, Xbox does not have a first-party launch titles the way PlayStation will with Spider-Man: Miles Morales or Bugsnax. Conversely, Xbox Game Pass has some big new additions: EA Play and Destiny: Beyond Light. EA Play is EA’s subscription service, where much of its catalog currently is currently available. Many recent Madden, FIFA, and Battlefield games came as part of this addition. Regardless of how much you play these games, the fact they are all on Game Pass now is absurd.

Bungie, somehow, years after leaving the Halo franchise, has the closest thing to a launch title for the Series X and S. Destiny‘s Beyond Light expansion is available on Game Pass now too. This starts Year Four in Destiny 2 after last year saw the game go free-to-play. After the first two major add-ons, Forsaken and Shadowkeep, came to Game Pass in September, Bungie vaulted most Year One content with Beyond Light. Regardless of these add-ons, Destiny is another game that drastically cut load times. Like Sea of Thieves, Bungie’s Action MMO suffered from long load times, sometimes taking a long while to load into a map. No longer. Going from picking a destination to arriving takes about ten to fifteen seconds. Even if vaulting content to optimize the rest has a part to play here, this is the biggest quality of life upgrade this game needed.

Sure, graphical realism may have plateaued last generation, but we still have things that feel next-gen now. Load times are shrinking, ray tracing is optimizing lighting displays, and platforms are expanding beyond consoles. I remember first playing Battlefield 4’s multiplayer and thinking to myself “wow, this feels like a story mission, not an online match,” back in 2013. Well, I’m happy to say that the Xbox Series X and S have new-gen moments like that as well. Day one was a day to remember, and it is still more likely to go up than down from here.