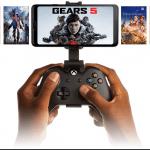 You are reading
Xcloud Comes To iOS And PC In 2021

The video games industry has found incredible success over these past months despite the pandemic. While many industries are struggling to survive due to economic and regional restrictions, the gaming market has blown up this year. With many people seeking either escapism from the world around them, or simply picking up a new hobby, the industry as a whole is thriving. This has led to several new services hitting the ground running to reach more and more new customers looking for different ways to play games. Xcloud, which is Xbox’s cloud streaming initiative is one of these services, that looks to reach outside of the console space and reach a much wider market. Thanks to an announcement today, it appears that more people will be able to access the service early next year.

Xcloud Looks To Expand Its Player Base

In an official blog post on Xbox Wire, it was revealed that Xcloud would be coming to PC and iOS devices sometime in Spring 2021. While there had been many rumors in regards to Xcloud and when it would come to iOS devices. This was caused by Apple blocking the Xcloud app via their app store, and setting ridiculous standards in order for Xbox to have the application run on these devices. It is revealed in the blog post that Xbox will be circumventing this block by allowing Xcloud to be played via the mobile browser instead of an application. This is similar to Amazon’s approach to getting Luna their cloud-based gaming service on iOS devices. When Xcloud comes to PC next Spring, it will also be expanded to a host of new countries. Which include Japan, Mexico, Australia, and Brazil.

While cloud gaming is no doubt in its infancy, it will be interesting to see how Xcloud grows as a part of Xbox Game Pass Ultimate. Xbox Game Pass has found massive success in a very short time, and with Xcloud being packaged in with Ultimate. It lowers the barrier that some people might have to try cloud-based gaming, due to the service being part of their subscription already. However, only time will tell how successful this will be.

Have you tried out Xcloud? Let us know in the comments and don’t forget to check back for the latest gaming news and information.