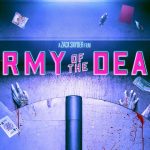 You are reading
Army of the Dead Teaser has Arrived Online

The Army of the Dead teaser trailer has been released. This is the first time that Zach Synder has been the director and cinematographer for a film. Once you watch the trailer, you will want him to be pulling double duty for every movie he makes.

Zack Synder’s second zombie film Army of the Dead is coming straight to Netflix. This movie was originally going to be a sequel to his version of Dawn of the Dead. That never happened and now we are going to be getting more than just one movie from this series. Look for an Anime and prequel movie later on from Netflix.

The story for this movie is pretty simple. Netflix has the description on their movies page. Don’t forget to add it to your reminder list. The movie will be landing on the streaming service on May 21st, 2021.

After a zombie outbreak in Las Vegas, a group of mercenaries takes the ultimate gamble by venturing into the quarantine zone for the greatest heist ever.

Dave Bautista from WWE and Guardians of the Galaxy fame will be part of this movie. Netflix is starting to really bring fans some great shows and movies. In March, we will be getting two separate anime series, Pacific Rim: The Black and DOTA: Dragons Blood. Look for more news on the upcoming Addams Family spin-off Wednesday  coming soon as well.

Take a moment to bookmark Lordsofgaming.net to get all of your gaming and entertainment news.