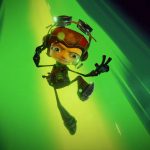 You are reading
Psychonauts 2 to be Released Soon?

Psychonauts is undoubtedly a cult classic. Tim Schaffer and his team at Double Fine produced some of gaming’s most memorable titles. This includes The Secret of Monkey Island, Grim Fandango, Brütal Legend, and other renowned games. After being acquired by Microsoft, Double Fine seems poised to release its upcoming Psychonauts 2. It might sooner rather than later.

During Psychonauts 2‘s development, Double Fine released a series of developmental diaries. They’re always worth watching because the studio is so fascinating and their creativity knows no bounds. In their latest video, there was a segment during a developer meeting on Zoom. This meeting could have potentially leaked the Psychonaut 2 release date.

You can see the video yourself above or here. The important tidbit can be found at the 1:58 time marker. It’s during that segment viewers can hear one of the developers citing some concerns in the video.

“If we keep adding on tasks like that, we’re gonna miss our date… we’re not gonna get to that E3”

Obviously, the date that the developer is referring to is Microsoft’s E3 briefing. The briefing is slated for June 13, which is not long now.

Could Psychonauts 2 release date coincide with Microsoft’s E3 briefing? Who knows for sure. However, based on some of the coy reactions of the concerned developer’s peer during the meeting, it is possible.

It's trippy, occasionally musical.. and a whole lot more! Explore strange mental worlds and meet cool characters (like this mysterious stranger voiced by Jack Black) in Psychonauts 2. Releasing next year on Xbox One/Series X and other platforms! pic.twitter.com/PhKwqwUFP2

Last year, Double Fine promised that the game will release in 2021. So let us hope they keep their word and Psychonauts 2 releases soon. If it does, it’ll be available on day one on Xbox Game Pass. So, millions of subscribers can access it from the get-go. But again, like anything from the internet, take it with a grain of salt.

Are you excited about Psychonauts 2? Do you think the game will release at E3? Let us know in the comment section below.