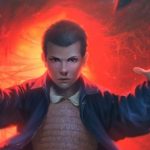 Today is the kickoff for the Summer Game Fest. Smite debuted a trailer for a new third-party tie-in. The new battle pass will feature a Stranger Things crossover from the hit Netflix series. This comes a day prior to their new reveal for Morgan Le Fay

Smite is a free to play, 3rd person MMO that features playable figures from the mythos of multiple cultures. Developers Titan Forge Studios (formerly Hi-Rez Studios) have also embraced crossover events with other franchises in recent years. Since then, popular franchise characters like Ruby (RWBY), Aang (Avatar the Last Airbender), Michelangelo (Teenage Mutant Ninja Turtles), and more have been added as skins for the game.

This brings us to the newest announcement. The Stranger Things crossover brings four characters from the franchise. Eleven, the Demogorgon, Hopper, and the Mind Flayer are the featured skins for the battle pass. Additionally, Eleven and Hopper have a variation outfit. Each skin is applicable to a specific god or goddess.

The mechanics for each god remain the same; however, the look, particle effects, and voiceovers all differ to match the Stranger Things universe. The Arena mode will also have its map changed aesthetically to appear as a setting straight from the “Upside Down.” This change will last for the duration of the battle pass.

The Stranger Things crossover battle pass arrives this July. Battle passes for Smite are free to all players, however; purchasing the battle pass nets players extra items. This premium tier offers cosmetics excluded from the free tier. Additionally, players can earn XP boosts for the battle pass. Tiers can also be skipped by way of gems (Smite’s premium currency). Thus granting players a faster way to reach the last tier.

This new crossover comes as a surprise. Yet the timing is in tangent with the announcement of Stranger Things season 4 officially in the works. This news came in lieu of the “Netflix Geeked Week,” a show revealing upcoming projects and series for all things nerdy and beloved. Smite will help add excitement come this July. For those wishing to dive into the battleground of the gods: Smite is available on Windows, Playstation 4, and Xbox One for free.