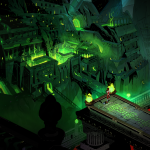 You are reading
Desiring Death: How Hades Changes the Roguelike Formula

Death is often a thing to avoid in video games. It signals failure, a halt in progress. In roguelikes, it also means starting from scratch, something that can frustrate players of all kinds. However, Supergiant Games have done something truly special with Hades. Their latest game, which recently launched on Xbox and PlayStation, changes up the roguelike formula in a way that not only makes death less of a blockade, it also makes it a desirable outcome.

Roguelike games can come in many forms and mix in a multitude of different genres. One thing that remains constant though is permanent death. There are no checkpoints, no picking up right where you left off. Make one false move and it is back to the starting area for you buddy.

Permanent death can provide players with a hearty challenge. A successful run in a roguelike also comes packaged with a release of endorphins that can rival the sweetest of gaming accomplishments. However, like every game system, genre, and mechanic it also has its drawbacks.

A run attempt in a roguelike can take up a valuable amount of gaming time. While that in itself is not a huge problem it can cause frustration when a player feels like no progress has been made at all from a run. Sure, you may have learned how to dodge a new move but the feeling of having nothing to show for it can still take its toll. 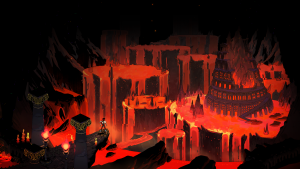 Some roguelikes have tried to alleviate this problem. Games such as West of Dead allow you to spend currency earned during a run on weapons to unlock. The only problem is that you still do not get to start a run with these weapons. Instead, you only unlock a chance of them appearing in future runs.

This sense of a lack of progress in a run and having nothing to show for your efforts is where Hades’ multiple changes have the greatest impact. Even the most appalling run allows you to progress in some form, in Hades each run counts for something. It is a group of changes that creates a formula where you enjoy visiting the start hub with the sweet release of death just as much as you enjoy crushing each boss into tiny little pieces.

Hades Growing Stronger with Each Run

Starting with the previously mentioned problem of only unlocking chances for weapons. Hades not only allows you to begin a run with any unlocked weapon, but you can also level up each weapon using Titan Blood and switch up the playstyle of a weapon with alternate aspects. Providing players with a greater opportunity to spend more time with their weapon of choice as well as gaining valuable experience in how to maximise each weapon’s use.

With weapon choice now entirely in the player’s hands, Hades can provide different RNG elements throughout a run. These come in the form of boons. Gifts from the generous, or stingy depending on your luck, Gods that offer buffs to both you and your weapons.

While these boons are random throughout each run you can ‘persuade’ the appearance of certain ones to an extent by using Keepsakes. These items further alter different stats and abilities of the player without relying on the luck of the Gods. Players choose a single Keepsake to bring on a run and can upgrade a Keepsake simply by clearing encounters. 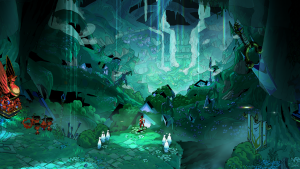 Weapons are not the only thing to grow in strength between each run. Players can also upgrade Zagreus himself using the Mirror of Night. By collecting Darkness and Chthonic Keys, two of the more common elements in Hades, players can invest in unlocking and upgrading more abilities to aid in future runs.

It is with these wide choices in starting load-outs and allowing ability upgrades across runs that Hades makes each run feel important. No longer does a fall to the first boss give you a sense of time wasted. Instead, you can return to the hub, use your resources to invest in upgrades, and get straight back to the action. You never truly start from scratch in Hades because of your growing strength between each run.

Story Progression with Each Death

One of the most praised aspects of Hades is the story. Supergiant has masterfully crafted a story that integrates perfectly into the death and retry loop of a roguelike.

Within the House of Hades, the game’s starting hub, you will find plenty of characters whose conversations contribute to both the main overall plot and several smaller subplots. The beauty of Hades’ story though is in how it is structured. Each death brings with it a new chance to progress the story with the House of Hades residents. They will provide you with a tantalizing amount of information to pique your curiosity before sending you off on another run. Only the fate of death will reveal new information and in turn progress the story further. 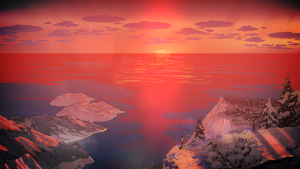 The story structure provides several bonuses that other roguelikes fail to offer. Firstly, the time spent interacting with each character acts as a cooling-off period. A chance to recharge those weapon-flailing batteries or to calm down from the frustrations of failure. It also provides an extra incentive to kick off another run. You may not want to face a certain boss again but you do want to know what happens next with the story. Most importantly though, it minimises the deflating feeling that comes with death and often times makes death a welcoming outcome. I have had plenty of occasions where during a run instead of going through tactics in my head all I can think of is “boy, I cannot wait to die and talk to Nyx, Achilles, and Hades again”.

It is not just the House of Hades where stories can unfold either. Characters that can be found within each run also evolve and progress with every meeting. There is a tragic love story to be found between a court musician and their muse within the second biome. It is another golden nugget where I could not wait to die once clearing the second biome as it would mean potentially seeing the next step in this bittersweet subplot.

God Mode is an entirely optional setting within Hades. With more games than ever now providing accessibility options for gamers of all abilities, it is very welcoming to see a roguelike introduce ways for everyone to play. However, Supergiant did not just stop at introducing a standard God Mode. This option is integrated in a way that completely fits the nature of a roguelike and allows for a finer tuning of difficulty. 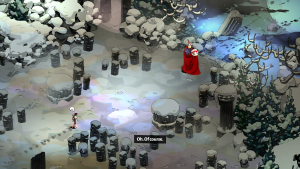 In Hades’ God Mode the player’s damage resistance is increased. Instead of a constant amount you begin at two percent resistance. Each death will then increase it by a further two percent. Damage resistance will continue to increase with each death until the cap is reached at eighty percent.

Not only does this compliment the aforementioned methods that enable a feeling of growing strength with each run. It also provides a way for each player to fine tune the difficulty to their liking. If a player tires of the repetitive nature of roguelikes or struggles with games of the genre then they can simply toggle God Mode on. This will allow them to play in God Mode until they have reached a damage resistance suitable for them all while retaining the roguelike nature of trying again with each successive run.

A New Standard for Roguelikes

All of these elements make Hades a one-of-a-kind. Supergiant has crafted a game that welcomes and embraces new players to roguelikes whilst simultaneously staying true to the challenge that fans of the genre know and love. Best of all, the worst possible outcome in roguelikes, death, is now a desirable event through many runs.

Hades’ formula sets a new standard for roguelikes. A standard that is truly deserving of the multiple Game of the Year awards it has received. It has never been more fun to go through hell and back. Whereas other roguelikes want you to stay as far away from death as possible, Hades encourages you to welcome it with open arms and in turn rewards you with a story and a feeling of growing strength that will stick with you for a long time to come.