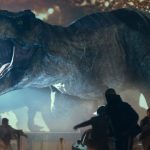 This weekend the sixth installment in the Jurassic Park series was able to take over that top spot. Jurassic World: Dominion was able to have a healthy opening weekend despite higher gas prices and possibly other financial issues looming around us.

Jurassic World: Dominion opened up this Summer with $143 million at the domestic box office. It seems that this movie could have done better in those regular times we used to live in. Now though this is a really great opening weekend. This was the film was able to gross $245 million in the foreign market, bringing the worldwide total to $389 million. This film would easily cross over that $500 million mark next weekend. Expect the critics to give this movie a low score. Right now on Rotten Tomatoes, it sits at 30%.

Top Gun: Maverick was able to add another $50 million this weekend to give it a domestic total of $393 million. At this moment this film sits at $747 million at the worldwide box office. Marvel’s second Doctor Strange is sitting at $930 million worldwide. If it had been able to open in a few more markets it would have hit that billion mark. I don’t see this as a big loss for the studio. The Bobs Burgers The Movie was able to gross $2.3 million it now sits at $28 million worldwide.

3. Doctor Strange and the Multiverse of Madness $4.8 million

Next weekend look for one movie to be released in a large number of theaters. Lightyear is going to be released against those dinosaurs. Look for that film to be at least in second place. The following weekend we will be getting the Elvis biopic and horror movie The Black Phone.