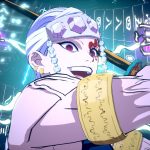 You are reading
The Hinokami Chronicles: Tengen Uzui Announced

Demon Slayer: The Hinokami Chronicles is back. Sega used the stage of CEO (a notorious tournament for fighting games) this past weekend. Their announcement of Tengen Uzui shocked many fans. Additionally, the game has more exciting DLC characters in development.

Tengen Uzui is the Sound Hashira. Originally, he debuted in the Entertainment District arc of the Demon Slayer anime. His flamboyant style is vastly different compared to other slayers. Consequently, the gameplay captures this vibe accurately.

Tengen’s normal moves command the space. He twirls his blades in rapid succession when attacking. Meanwhile, his special moves bring colorful animations to the battlefield. The ultimate arc brings his gameplay to a fiery climax of fiery works. Overall, my first impressions of his gameplay are favorable. He seems to bring all the flair and ninja flavor from the anime arc.

Tengen Uzui arrives sometime in July for The Hinokami Chronicles. Eventually, he will be joined by other additions from the Entertainment District arc. The demons Daki and Gyutaro, district versions of Inosuke, Tanjiro, Zenitsu, and lastly Nezuko Awakened will join the roster. Players must purchase these characters from the arc.

How are you feeling about more content coming to the game? Let us know in the comments down below. You can find our review of Demon Slayer: The Hinokami Chronicles here. For all things Demon Slayer: bend the knee in the realm of Lords of Gaming.