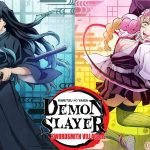 Demon Slayer – Kimetsu no Yaiba – is a beloved anime based on the manga by Linsey Hall. The anime concluded its Entertainment District arc months ago. Thus, leaving fans craving for more. Anime lovers did not have to wait long as the Kimetsu Festival unveiled the first trailer for the Swordsmith Village Arc.

The Kimetsu Festival celebrates all things Demon Slayer. The event continues its third gathering at the time of writing. Japan hosts the Kimetsu Festival. However, the event is live-streamed in Traditional Chinese and English.

A panel celebrating the Entertainment District Arc held a surprise. The panel revealed a first look at the next season, the Swordsmith Village Arc. First, the trailer brings a retelling of the past events for the anime. Chiefly, Tanjiro and Nezuko’s (the series’ protagonists) struggle to stop Muzan and find a demon cure.

Memory panels on a scroll show these events. Lastly, an additional scroll is added teasing two new Hashira. Naturally, they are both as unique as Rengoku and Tengen.

Season three is titled the Swordsmith Village Arc. This refers to the secret hideout of the famed smiths who partner with the Demon Slayer corp within the universe. Demon Slayers use special katanas named “Nichirin Blades.” Specifically, their sole purpose is to slay demons. Forging them requires special materials and masterful bladesmiths.

Thus, these smiths are vital to the success of the Demon Slayer Corps and the downfall of demons. Without giving away manga spoilers, this arc will revolve around the village’s protection. Tanjiro is shown in the village awaiting his new katana (he has a knack for losing them).

Meanwhile, the Mist Hashira (Muichiro Tokito) and the Love Hashira (Mitsuri Kanroji) are given brief cameos. Season three does not have an official release date. However, the Entertainment District Arc has shown Demon Slayer – Kimetsu no Yaiba – continues to smash expectations with each arc. The entire cast is reprising their roles and fans should be in for another fantastic display of storytelling and animation. Are you excited about the return of Demon Slayer? Let us know in the comments down below! 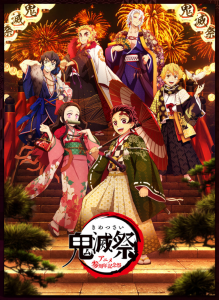 Promotional poster for the event