You are reading
Four Simple Rules To Playing Anthem With Friends

Anthem Should Be Played Together Except When It Shouldn’t

One week into Anthem and, unsurprisingly, the best part is playing it with my raid group. I’ve been playing with the same crew since just after the launch of Destiny: The Taken King, and though we have explored other games, nothing has held our interest quite like Destiny. Anthem has the potential to change that, but only by ignoring or missing out on the story elements for which Bioware is most famous.

If you have jumped into any main story mission with public matchmaking, chances are you can’t tell me what happened during your thirty-minute long excursion. Somewhat unfortunately, the same cooperative elements that are so integral to the success of live games- battlefield tactics, socialisation, and exploration- are very much at odds with the ongoing narrative of Anthem. The first two story missions were all but lost to the ongoing conversation between squad members. Dialogue dispensed by the gorgeously rendered NPCs in Fort Tarsis too was a casualty to friendly banter. 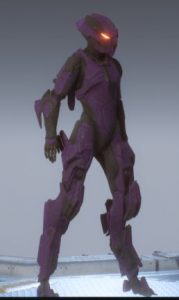 Which has lead to these four simple rules for playing Anthem.

The story of Anthem is not necessarily its strongest suit, (that would be the Colossus Javelin) but you owe it to yourself to see the incredible cut scenes with the diverse cast that has been assembled. Yes, the characters all are over-acting in a hammy Renaissance Fair kind of way, but despite the initial mission being horribly cliched, it did provide an emotional foundation to work from and motivation for your character. The interactions with Owen, Haluk, Sayrna and more are worth going back to as you piece together the lives of these characters in a way that other live games never seem particularly interested in. There is a reason why the Destiny community went nuts over the revelation that Mara Sov and Shaxx hooked up because they are starved for information on these characters. It is an underrated part of Anthem that deserves more love.

The other primary reason to stay solo with the story is that you are going to miss a lot of it by playing with others, especially random players. Your squad mates will rush from objective to objective which obfuscates what you are actually doing and why. In an early mission, Owen takes a javelin for a spin, and it does not go well. I almost completely missed it thanks to my teammates’ rapid response to his compromising situation. That moment proves a pivotal point in the ongoing relationship between the two main characters, and missing it deprives the player of crucial context for their clashes going forwards. 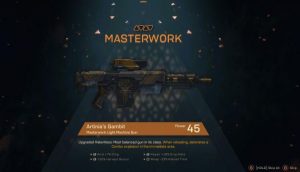 For as-of-yet undetermined reasons, Bioware decided that the only time you can see all of the loot you have acquired is by traveling to the Forge.  Therefore, if you want those “OMG ROLLING CARNAGE JUST DROPPED” moments, take your entire crew to the Forge before launching into the Fort. Everyone can freak out while they are respec-ing and you don’t lose those moments that the game already does its best to deny you. 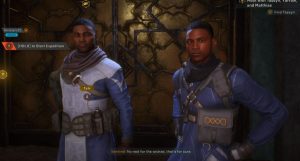 Must be why they call me, Wicked.

3. No One Speaks in Fort Tarsis

Fort Tarsis is where the bulk of the non-expedition time is spent. As everyone who has touched the game knows, calling the movement speed glacial is doing a disservice to icebergs everywhere. The Fort really opens up as you progress with NPCs spread out in a not-immediately intuitive way. As a result, it takes some time for you to make your way through each of the conversations. So, when playing with friends, mute them all. The game provides an easy way to show that people have completed their loop through the NPC gauntlet by way of the conveniently placed ‘ready’ icon. If you’re the first to ready up, unmute your team and go get a snack. Let your friends continue to wade through the molasses atmosphere that the Shapers left behind.

He’s just terrible. You will enjoy your experience much better by never talking to him.

5. Everything Else is Fair Game

Flying around the world, picking up contracts, completing strongholds, and hunting Titans is all fun to play. This is where the game shines as a social experience; go enjoy it. Get your friends together and explore the gorgeous environments that Bioware has crafted. Listen for the hum of the Anthem, and rack up those medals.