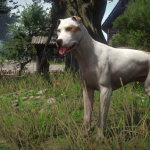 At PAX East, the Iron Lords Podcast team had the pleasure to meet with Warhorse Studios about the upcoming DLC titled A Woman’s Lot, third and slated to be the final DLC to the game. This is the developer to Kingdom Come: Deliverance.

With A Woman’s Lot, Warhorse Studios believes this DLC to be the biggest and most ambitious to date for the game. This would seem very fitting as this is the anticipated last DLC to be released for the title. A Woman’s Lot will feature a playable female protagonist named Theresa, and her dog companion named Tinker. Theresa’s canine companion will feature its own set of skills and perks. The dog is also said to have a unique response to the player as the better you treat the dog, the more willing it responds to you and your commands. Attacking, searching hidden items, and other skills and abilities will additionally be at the dog’s disposal.

Theresa will also be able to see the main protagonist from the original story, Henry, giving a unique spin. Playing the DLC can be triggered at any point after a specific point is reached in the main game, and is said to be roughly five hours long. The final DLC is slated to release this year in May.