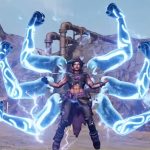 You are reading
Borderlands 3 Gameplay: Still Leader of Looter-Shooters

Editors Note: Earlier version did not include the full details of microtransactions in the game.

Today, Gearbox showcased all new gameplay to the upcoming Borderlands 3 game. Given this will be the fourth third entrant to the series, also that the previous game released in 2014 2012, a lot has changed in the evolution of first-person shooters and looter shooters in general.

A few new additions to Borderlands 3 that you can expect:

Players can now clamber and slide the terrains. In combat, there are other new mechanics including enemies that can launch you into the air from ground melee attacks. Barrels can also now be meleed towards locations allowing you to detonate them at your intentions. Before barrels would explode on contact.

As for guns, they can now drop with multiple different ammo types including regular bullets and missiles. In the reveal, some guns noticeably had bayonets attached but nothing stating that they would be useable. Today’s showcased confirmed the pointy-ends to be utilized. We were also able to see the neatness that are Tediore weapons that include explosive bouncing balls and the much-anticipated guns with legs.

A few things that we were able to see in the showcase were from known things such as cooperative play. Loot primarily showed how loot will drop per person and no longer a thieving session. The weapons will also scale to the level of each player. Two modes will be set in Borderlands, that will scale characters to the output towards the player who is hosting the session. Borderlands 3 will also include a classic mode for those who are interested in helping friends “power level.”

The home-base, Sanctuary III, is a space-ship that acts as your scuttle between the planets and locations you will be visiting. It includes a new machine that will collect unclaimed loot from your previous excursions, it has a players quarters that changes depending on the character you are playing, all of your favorite NPC stores and locals like Moxxi’s bar.

Lastly, no microtransactions confirmed. Rejoice. Well, at least at launch, as it is stated that there will be purchasable cosmetics, but no intentions to “nickel-and-dime.”

One thing is for sure, Borderlands 3 looks like it is meeting with the times with the new mechanics. Time will tell if they will be continuing to lead the pack in the looter shooter genre as well.

A lot more was revealed, but what was your favorite part of the reveal? Let us know in the comments below.