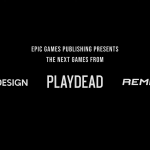 Epic Games has become quite the major player in terms of throwing their financial might around as of late. With Fortnite practically being a money printing machine, Epic has been making moves to diversify its portfolio. The company has certainly made waves in the PC space with the Epic Games Store. Now the company appears to be focusing more on the publishing side of the industry.

In a blog post, Epic announced today that they would be partnering with 3 studios to publish new and exciting titles. These three studios are Remedy, Playdead, and Gen Design. These are a diverse group of developers with Remedy coming off of GOTY contender Control. While Playdead is known for its bleak Indie games Limbo and Inside. Last but certainly not least is Gen Design the creators behind The Last Guardian. It creates a diverse publishing portfolio right off the start for Epic Games.

The most interesting aspect of this publishing deal is that we know some of the details in terms of money share and IP ownership. Most of the time we are left to speculate on what the terms of these deals might be. In this blog post, Epic shared the basic terms of what these publishing deals entail. They are as follows.

It will be interesting to observe as Epic continues to spread its wings within the publishing side of the industry. There is no doubt that many mid-tier studios would most likely jump at an opportunity to have a deal like this. Only time will tell what the positives and the negatives of these deals could mean in the future.