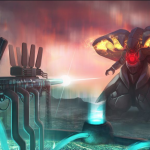 A lot is changing in Final Fantasy VII Remake compared to the original game it is based on. An expanded story and new areas are among those new changes, but one, in particular, caught people off guard – the boss fights. FFVII Remake is taking the simple fights we know well and completely reworking them to be more layered and epic. We’ve seen this with Guard Scorpion in the free demo and Aps in previous coverage – two fights that were originally effortless. With this much attention to detail, fans are wondering how Square Enix is going to tackle the more grand boss fights. In this article, we’re going to cover how the Diamond Weapon boss fight could work in the remake.

The Diamond Weapon boss fight is one of the most cinematic parts in the original FF7. The behemoth being emerges from its slumber to protect the planet against Shinra’s Sister Ray weapon in Midgar. Since the damage from Diamond can be catastrophic, Cloud and the party have no choice but to fight it. While Ultimate Weapon is the first boss you fight in the Weapon family, its size pales in comparison to Diamond.

Cid won’t allow the player to fight Diamond Weapon while on the airship, so the next option is to fight it on land. What follows is your standard, yet fun FF7 boss fight. How this fight will translate in the remake project is what has everyone guessing.

Learn From Past Experience

Square Enix is, obviously, no strangers to large-scale cinematic moments in their video games. In recent titles, like Kingdom Hearts III and Final Fantasy XV, the graphical quality has jumped significantly. Mix in with these larger-than-life boss battles, and it can be an extremely visually-pleasing sequence.

One issue I believe Square can touch on is the gameplay. In Final Fantasy XV‘s Titan and Leviathan battles, the scale was insane. The music is amazing and the camera work is pretty great too. But the gameplay and pacing were disjointed, clunky and not as fun as the game wants you to have.

Kingdom Hearts III‘s Rock Titan fight on the other hand, was a step in the right direction. Anticipation builds as Sora scales up the mountain to take on the mythological rock monster seen in Disney’s Hercules film. When you finally reach Rock Titan, Sora aims for the giant’s feet so it can fall, be stunned, and be open to a flurry of attacks. Eventually, a prompt appears to trigger the game’s Big Magic Mountain Attraction (inspired by Disney Park’s Big Thunder Mountain roller coaster).

The entire sequence is exciting and fun to pull off, but it also revels in its bombastic Kingdom Hearts-style gameplay. Which, and I think something we can all agree on here, is something Final Fantasy VII Remake shouldn’t do.

Since Remake is encouraging new ways to approach classic moments, Square has full creative control of how to go about this. Nonetheless, here is what we have in mind:

Cid is still worried about the collateral damage that can be done to his airship, and therefore offers another alternative: summons. In the first entry to Final Fantasy VII Remake, summons are AI-controlled battle companions. However, what if they were made playable for the Diamond Weapon boss fight? So for the following scenario, keep in mind it’s all player-controlled.

Since Diamond Weapon has to make his way to land, let’s get Leviathan to storm the seas and delay its arrival. Once Diamond’s health gets a third of the way down, bring in the ancient dragon Bahamut himself to wreck havoc. Using a mix of aerial swipes and ranged energy attacks, Bahamut gives a worthy challenge for Diamond. However, it still won’t be enough to take it down. That’s right, let’s go full Kaiju for this fight in Final Fantasy VII Remake.

As Diamond makes his way towards land, the group decides to take a last stand and go toe-to-toe. While Cid distracts Diamond by flying around it, the party on the ground goes for its feet and legs. They hit specific breaking points to weaken the giant with the nimble characters getting a chance to do some cross-combo aerial attacks.

To end it off, this fight can take a page from FFVII: Advent Children‘s Bahamut battle scene. As each member is doing their part, Cloud readies, then executes the final blow that he thinks will end Diamond, similar to Advent Children. The player achieves their victory, but the monster has yet to fall. Thus follows the scene with Shinra’s Sister Ray and what comes after…

It’s flashy, it’s complex, and it will probably be one of the most expensive set pieces in the remake project. But, it’s one of the many mind-blowing parts from Final Fantasy VII. With the first installment of the Final Fantasy VII Remake series, Square Enix is setting a high bar. From our impressions of the free demo, the battle system, visuals, voice acting, and moment-to-moment gameplay are top-notch. Let’s hope this kind of quality carries through the rest of it.