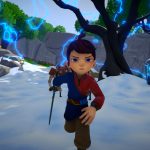 You are reading
Ary and the Secret of Seasons Impressions

The Story of Ary and the Secret of Seasons

The preview build included the very beginning of Aryelle’s (nicknamed Ary) mythical tale. Due to rising events in the story, Ary sets off from her comfortable village to become the Guardian of Winter. She travels the world of Valdi in place of her father, the original Guardian of Winter suffering from depression after the disappearance of his son/Ary’s brother. While her mother absolutely refuses the idea of leaving home, that doesn’t stop Ary from taking on the task to harness the four seasons.

Describing the beginning hours of the story, let’s think of the differences between an animated Disney movie and a made-for-TV animation kids film. Disney flicks are fashioned for youth but usually have enough thematic elements to intrigue an older audience. Television movies on the other hand are mostly there just to give children a nice distraction. From my time playing, Ary and the Secret of Seasons is more of the latter. The introduction to Ary and her family leaves more room for imagination. We’re not given much in cutscenes or early events to be really be invested in Ary’s big decision to leave home. She’s charismatic and has a fun personality for sure, but the sequence of events plays out pretty lazily and similar to a kid’s television animated movie. For this preview, story beats seemed to happen just because with not much impact or motivation.

The best aspects to accompany the simple narrative are its art style and music. The game portrays a fully 3D world with not the sharpest graphics, but it’s not bad looking either. The art style speaks volumes in place of shiny graphics and fits the mythical East Asia tone of the game. Some game design choices, like the HUD style and main menu, are quite bare bone, however. For a game about a child controlling nature through crystals, I was expecting the game to lean more into its fantasy theme by stylizing certain aspects. While small oddities like that break the immersion, it’s the music that kept bringing me back in. The score has an epic and legendary vibe that’s better than the average inspirational themes found in animated youth films. Fans of video game OSTs should keep an ear open for Ary and the Secret of Seasons.

Ary and the Secret of Seasons is said to be filled with platforming puzzles and action. In the preview build, we were given access to a late-game dungeon that unlocks the full potential of Ary’s season-shifting abilities. The dungeon gives a wide view of how those abilities translate to puzzle solving and fighting. Using the slingshot combined with her powers, Ary can create platforms to reach higher grounds. The puzzle platforming sections were responsive and fun, simple brain teasers. Along the way, she can use her sword to attack enemies. Ary can parry and dodge in combat as well. The window of opportunity for parrying is forgiving and quite easy, more so than I expected. While the combat was simplistic in this build, it was fluid and polished enough to be pretty enjoyable.

More on the Dungeon

Thankfully, I didn’t encounter any issues when it came to combat and platforming. The game is capable of some absolutely exciting moments as well, especially the dungeon’s end sequence and boss fight. The battle itself was fun to engage in with carefully dodging and taking chances to deal damage.  The moment-to-moment gameplay kept me hooked, even if I did encounter a few sound bugs and odd jump cuts. The section we played sported an East Asian art direction similar to the beginning of the game as well. While pretty to look at, it made me wonder if the game ever deviates for visual variety.

There was one instance when I died during the dungeon, the game reloaded, and I couldn’t advance. Progress was essentially blocked and the build never corrected itself, forcing me to restart the level. The developers are aware of this issue however, so hopefully, the problem is solved before release.

Takeaways From Ary and the Secret of Seasons Preview Build

Ary and the Secret of Seasons will have its audience – the ones who love East Asian art direction; a coming of age story geared towards a younger age group; and a nice, relaxing action-adventure game. Combat, puzzles, and platforming are not too challenging, reminding me of the PS1 and PS2 days of simple 3D platformers. The story beats may lack the impact it wants to deliver, but the fantasy concept alone is interesting enough. Stay tuned to LordsofGaming.net for our review. Ary and the Secret of Seasons releases September 1, 2020, for PS4, Xbox One, Nintendo Switch, and PC.