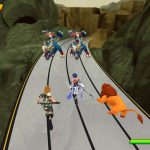 You are reading
Kingdom Hearts: Melody of Memory Review

After nearly 20 years, Kingdom Hearts has surely left its mark on the video game world. Whether it is the miracle partnership between Square Enix and Disney or its universally acclaimed music, the franchise is unlike any other. Kingdom Hearts: Melody of Memory is the rhythm game the series deserved and a celebratory victory lap for what makes it so enduring.

Melodies in the Memories

Many elements combine to make Kingdom Hearts special, but it is the music that cements its identity. Series composer Yoko Shimomura made waves with the first game’s OST. Tracks like Dearly Beloved, Hollow Bastion, and original scores based on Disney movies were all hits. I remember trading “Where were you?” stories with friends when we all first heard Kingdom Hearts’ Japanese pop theme song, Simple and Clean. From piano arrangement albums to world tour concerts, Kingdom Hearts‘ music is the one aspect that went beyond the games.

With tracks that span over ten titles, Kingdom Hearts: Melody of Memory (KH MoM) is the perfect love letter to the series’ gorgeous music. All the climactic battles and heart-wrenching moments would not have the same impact they do now without it. With so much range, it rivals the music of its older cousin, the Final Fantasy series. 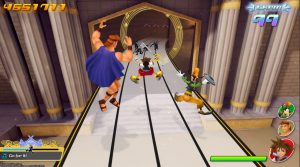 See More: Every Confirmed Song For KH: Melody of Memory

The game does have a dedicated main campaign in which you will travel to Disney and Kingdom Hearts-based worlds featuring a handful of songs from each. There are over 60 stages covering major story beats throughout the series with the final half-hour pushing the grand narrative forward. The narration in Melody of Memory is more of a refresher on parts of the story rather than a full-on retelling. Any newcomer would be overwhelmed if they decided to start with KH MoM.

However, for fans invested in the franchise already, the game is a nostalgia-fueled trip down memory lane. From upbeat tracks like Working Together to epic boss themes such as Darkness of the Unknown, it is nice to have a game that embraces every aspect of the series told now through music.

Including over 140 tracks, KH MoM embraces its action roots, even as a rhythm-based game. It is not your average rhythm game as it features cinematic and action-based gameplay that match to the beat of the songs. The game features multiple gameplay stages in three different styles. One is Field Battle, in which the playable characters run on a musical score taking out enemies. Another is Memory Dive, where cinematics play in the background as characters fly to notes. Lastly, Boss Battles are just as they sound, except, actions like attacking and dodging are determined by pressing the music notes at the correct time. 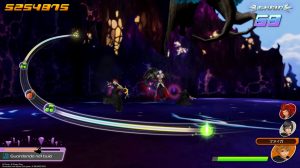 While KH MoM’s rhythm gameplay takes some getting used to, I easily became addicted to it. The gameplay was mesmerizing in its visual and action splendor. So much, that “one more song” has a habit of becoming ten more songs.

Additionally, Kingdom Hearts: Melody of Memory comes with local co-op and online versus multiplayer that are equally as fun as the campaign. The local co-op includes two players on the same stage working together to get a high score. Online versus has two players going head-to-head to get the best score. Both are delightful surprises. I even found myself jumping online more than deep diving into the single-player.

Whether in single-player or multiplayer, the game does a decent job of rewarding the player. Perfecting tracks, which include not missing a note or getting all Excellent ratings on notes, was immensely satisfying, especially against harder songs on Proud difficulty. Doing so can earn you key artworks to add to the game’s virtual museum.

Is Melody of Memory Worth $60?

Players may question why KH MoM is a $60 game, but its replayability speaks for itself. With a dedicated campaign and multiplayer, the game also has a total of nine ways to play all 140+ songs. To elaborate, there are three difficulty settings – Beginner, Normal, and Proud. Each setting can be adjusted to be more or less challenging with these three modes: One-Button, Regular and Performer. 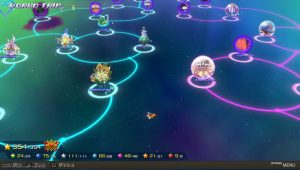 Regular mode on each difficulty is the sweet-spot for average to experienced players. Hardcore players will gravitate towards the Proud + Performer combo, but there is enjoyment to be had on One-Button mode too. Throw in the virtual museum full of unlockable artwork, and Kingdom Hearts: Melody of Memory has more than enough to warrant the $60.

Magic of the Melody

After sinking in dozens of hours, Kingdom Hearts: Melody of Memory became one of my favorites in the series. It is a perfect bookend to the Dark Seeker Saga storyline while teasing its next big step forward. While it is not the best stepping on point for newcomers, it makes a solid landing spot for veteran fans.

The true star of the Melody of Memory, however, is the amalgamation of the series’ signature action combat and incredible score. The combination flawlessly captures what makes the franchise so much fun and so identifiable. Kingdom Hearts: Melody of Memory is a lively rhythm game celebrating 18 years of pure magic.