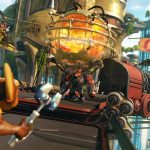 During Sony’s April State of Play, new and extended gameplay of Ratchet & Clank Rift Apart was on display.

Insomniac Games revealed 15 minutes of PS5’s Ratchet & Clank with narration to bring players up to speed on the story so far. The gameplay shown off embraces the series’ action platformer roots. Players can wall run and dash in and out of battles for extra platforming variety.

Insomniac Games also broke down how jumping into rift dimensions work in gunfights and exploration. Check out the full gameplay video below:

Ratchet & Clank Rift Apart will utilize the DualSense’s features as well. With the pistol, players can pull the trigger halfway for a single shot. Pull the trigger fully, and the pistol turns into an automatic shooter.

Earlier this week, Insomniac Games revealed the name of the mysterious female Lombax, Rivet. Rivet will also be a playable character in the inter-dimensional space adventure.

Ratchet & Clank Rift Apart will release on June 11, 2021, exclusively on PS5. A Digital Deluxe Edition is available to preorder, which comes with a photo mode sticker, a digital soundtrack, a digital art book and 20 Raritanium.

Along with the new gameplay, Sony provided updates on two indie games coming to PS4 and PS5. Subnautica: Below Zero and Among Us are heading to PlayStation consoles this year.