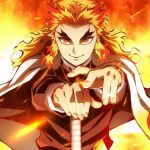 You are reading
Demon Slayer: Mugen Train Stands Tall This Week in The Box Office

This weekend something happened at the box office that really doesn’t happen. An Anime film has taken the top spot at the box office. Demon Slayer: Mugen Train was able to take down Mortal Kombat in their second weekend at the domestic box office.

Demon Slayer: Mugen Train grossed an estimated $6.39 million this weekend at the box office. This film was actually released in a few hundred more theaters. Sitting at 1,905 theaters it is amazing to see how this film was able to top the box office. Mortal Kombat was released in 3,114 theaters, the film was also released on HBO Max at the same time. Demon Slayer is sitting at $34 million domestically and $394 million internationally. That gives this film a worldwide total of $428 million right now, at this point, it is the highest-grossing anime film of all time.

Mortal Kombat has defied what many thought was a terrible movie. At this point, this film has grossed a domestic total of $34.1 million. Combined with the international total of $32.8 million the film sits at a worldwide total of $66.9 million. It should be enough revenue generated for another installment in the Mortal Kombat franchise in the future. Separation was a horror movie that was released this weekend. In its first weekend, this film grossed an estimated $1.8 million. Godzilla vs Kong has been consistently making money at the box office, grossing an estimated $2.7 million this weekend. This film is sitting at a worldwide total of $415 million worldwide. With this amount of money earned, we should get more MonsterVerse movies in the future.

Next weekend look for a couple of movies coming to the theaters. Here Today and Wrath of Man will both be released in a wide number of theaters. Don’t expect these two movies to do much at the box office. Demon Slayer: Mugen Train should stay at the top next weekend as the Anime is set to release in more theaters next week.