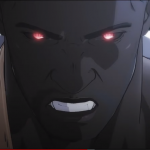 Guilty Gear Strive releases later this week. Arc System Works hosted an early access showcase today. This gave viewers a look at the roadmap for post-launch updates. Additionally, fans were given a deeper dive into the game’s story.

Katano Akira (Development Director) and Ishiwatari Daisuke (General Director) hosted the early access showcase. They begin with the opening minutes of Guilty Gear Strive’s story. This stars I-NO giving guards a run for their money. She seeks aid in her quest for power and will play a prominent role in the story.

The Guilty Gear series has evolved. Games prior took a visual novel path for telling a story. However, this is no longer the case. The opening scene shows significantly improved cinematography., and the series now truly draws from anime inspirations.

The early access showcase also showed Sol Badguy returning to his roots in America. Previously, the story was mostly set in Illyria (a fictional kingdom in Europe). Now, Ishiwatari asks fans to pay close attention. The change in setting brings with it numerous cultural stylistic changes that will affect every aspect of the game.

Next, the early access showcase presented a roadmap. Here, the first DLC character will arrive in July. This will be a character brand new to the series’ roster. The next character follows in August. However, this will be a returning fighter from previous titles. Characters three through five will arrive sometime later this fall along with additional story and stages. 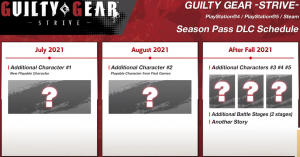 Aside from DLC, Arcsys will also provide free updates. The first of these include a combo maker feature. This allows players to upload combos they construct. Other players are able to utilize these uploaded combos for themselves. More customizable options for player match rooms will be coming along with a digital figure mode. Lastly, new additions will be released periodically. 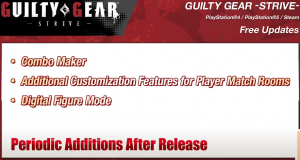 Guilty Gear Strive is just around the corner. The early access showcase gave fans a taste of things to come. Ultimate and deluxe edition owners of the game can begin playing on June 8. Standard Edition releases on June 10 for PlayStation 4, PlayStation 5, and PC. Check out the full showcase below.