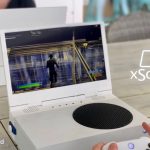 Two advantages of the Xbox Series S are its compact design and light weight. Throw Xbox Game Pass into the mix and you have a more than capable machine for next-gen gaming on the go. However, while the console itself does not take up much space, you still have the task of lugging extra cables and finding a TV or monitor to hook up to. That’s where UPspec Gaming, an Australian-based start-up, is looking to change things with their Kickstarter xScreen. An integrated folding screen design specifically for the Xbox Series S. 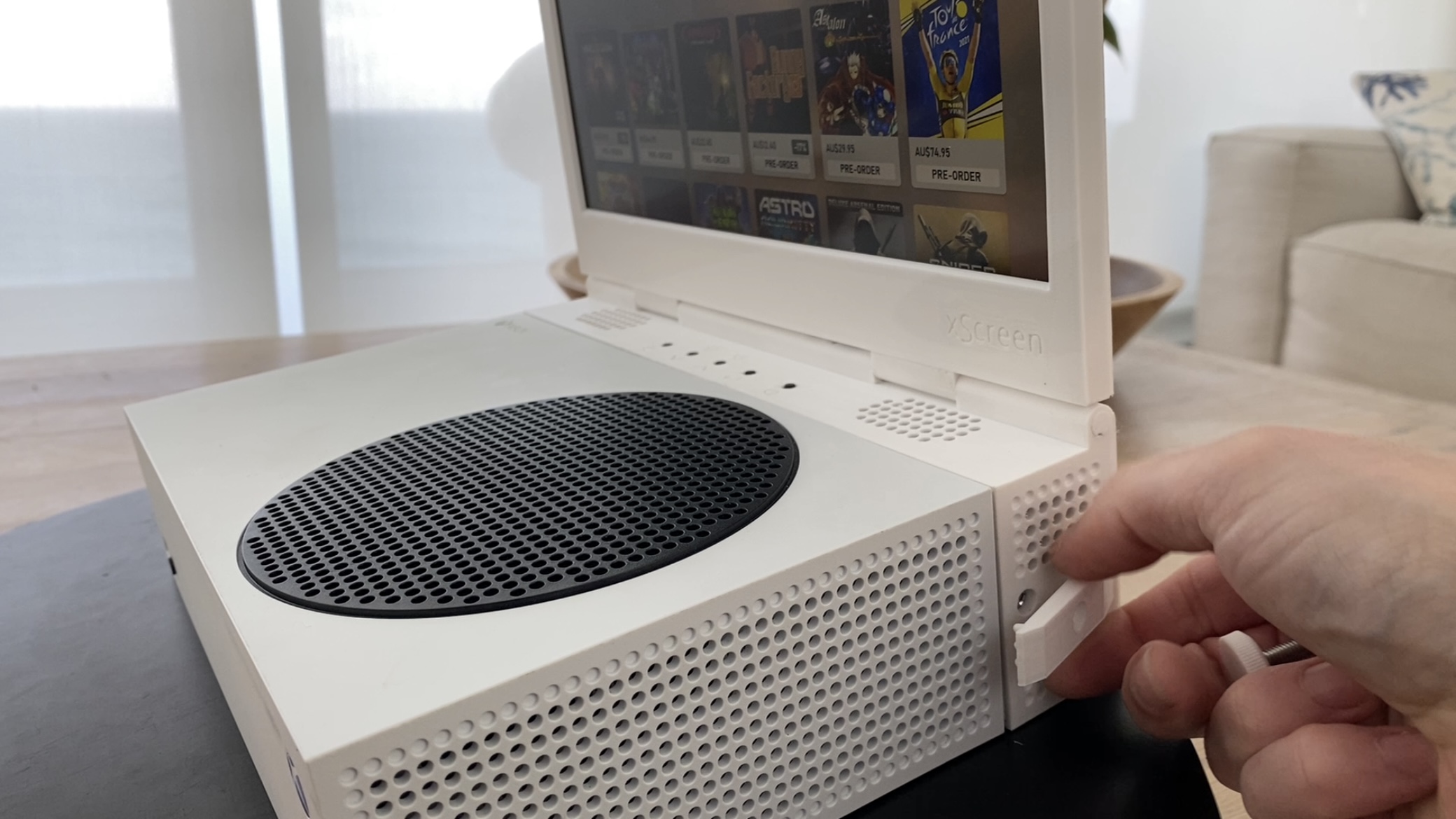 The xScreen features an 11-inch 1080p screen with a refresh rate of 60Hz. The design also allows the xScreen to be neatly folded on top of the console when not in use. Maintaining the Series S’ compact size and portability.

It certainly opens up a range of possibilities for players. From group sessions at a friend’s place to losing the evening battle for the TV. The xScreen can ensure the gaming continues. It is a product that has certainly proven popular. The Kickstarter reached its target goal within just twenty minutes of going live. As of writing, it has exceeded ten times the initial target with roughly three weeks remaining of the campaign.

With the wild start of the xScreen Kickstarter launch and the prospect of a successful Xbox Series S accessory on their hands, we reached out to UPspec Gaming for a talk about their reactions, how the xScreen came to be, and some of the key pillars behind the design of the xScreen.

A Quick Chat with the Faces Behind the xScreen Kickstarter 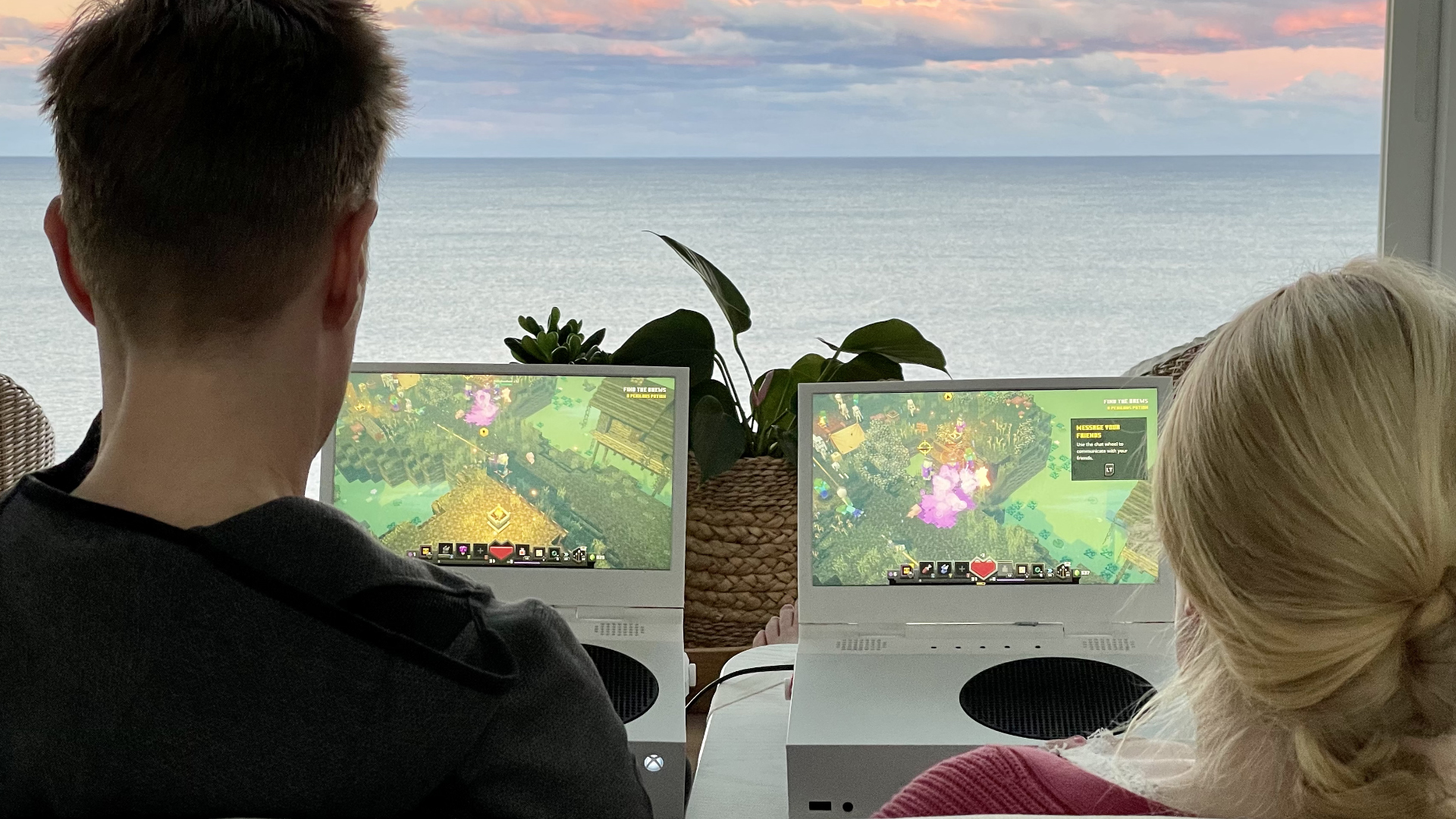 First of all, congratulations on the stellar launch. Your Kickstarter reached its target within 20 minutes and has continued to soar with over 3 weeks left. What has the atmosphere been like at UPscreen Gaming since the launch of the Kickstarter?

“We are thrilled! And are so fortunate to have developed a really supportive following on social media which has made this possible. We just want to say thank you to all our early backers, and all the people who are sharing our product with their friends. Also, the journalists who are taking the time to write stories. We are really overwhelmed by the reaction we have received!”

The xScreen is only available for the Xbox Series S. Has that always been the only targeted console and what drew you towards the Series S?

“Yes, the Xbox Series S was really the inspiration for the xScreen. We have long wanted a “portable” full power console but until now have always felt that the consoles were all too big to attach a screen too and keep them small enough to take in a backpack in the same way you would a laptop. When we first saw the surprise announcement of the Xbox Series S we knew that this was the console that would be perfect for this purpose. The fact that it has an odd narrow rectangle shape makes it perfect to combine with a screen. We actually just designed this for ourselves and then got such a strong response from family and friends that we decided to test interest in commercialising it.” 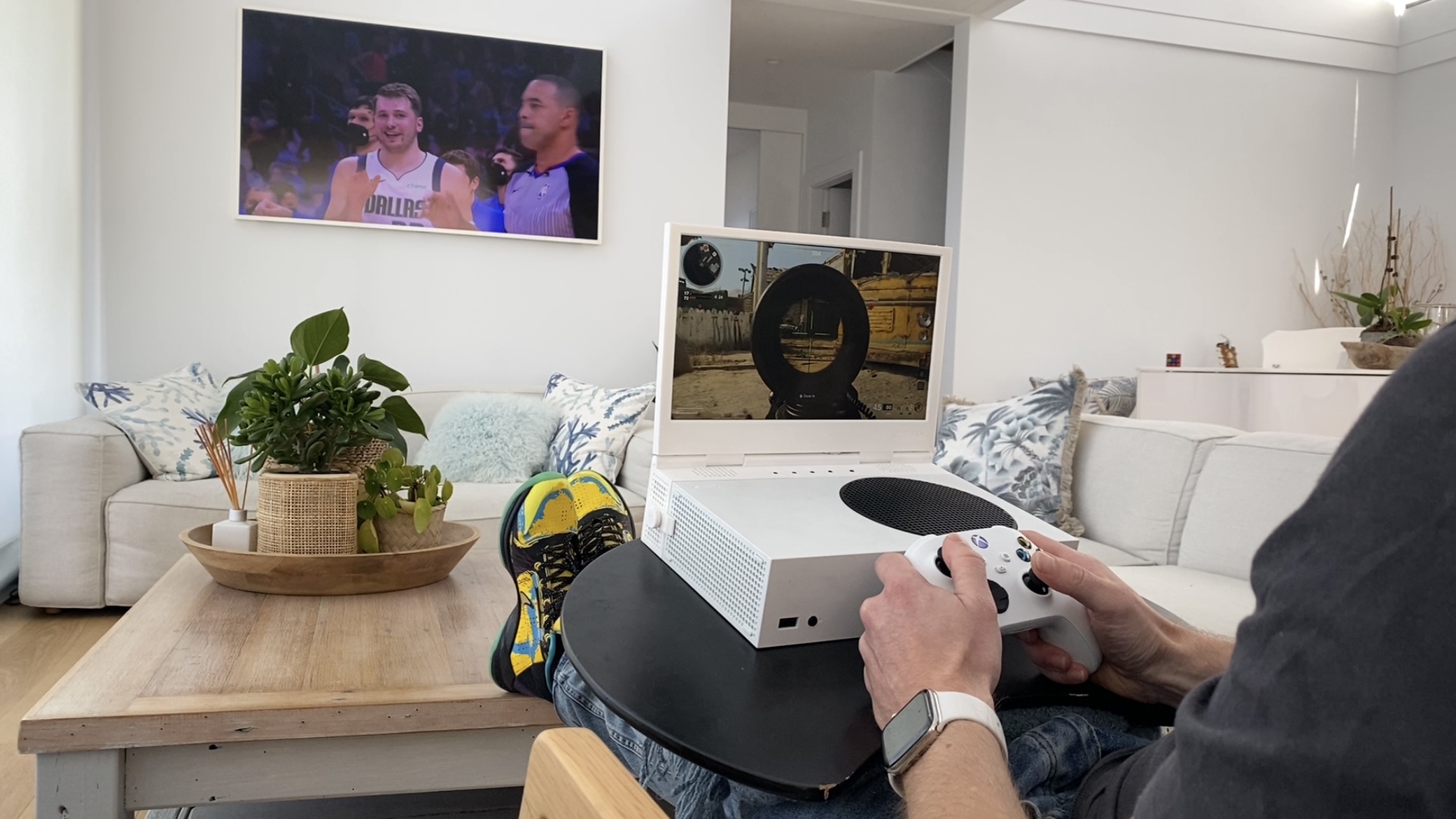 We’ve seen several features that allow the xScreen to be as compact and integrated as possible. What were the main pillars behind the design of the xScreen?

“Yes! Our goals were to make a product that felt like a natural extension of the Xbox Series S. To make it as small as possible but with the largest screen possible. Have a simple attachment mechanism that did not require any plugging in of cables and no separate power cable for the screen (this part we are really proud of and is the patent-pending part of the design). To create something of high quality that we as gamers would be excited to use and proud to have our names attached to.”

Gaming on the go has become a popular way to game in modern times. With that, we have seen the introduction of several portable gaming monitors for consoles. Microsoft’s own Xbox Cloud Gaming is also available on mobile and Windows 10. What do you feel makes the xScreen stand out from those?

“As gamers, we love them all! We are really excited about gamepass and xcloud as the future of xbox gaming but we think, that for most of this generation at least, the quality and lag that exists with streaming still can’t compare to a direct console experience. For some game types, it doesn’t matter but for others, the lag on streaming makes you uncompetitive. Also, there are many countries (here in Australia included) where the quality of internet is still a long way from cloud gaming being a realistic primary option. Lastly, there are always going to be situations where there is no internet connection available (pro tip – it is a common misconception that the Xbox Series S does not work without internet but it does as long as you set it as your home xbox console).” 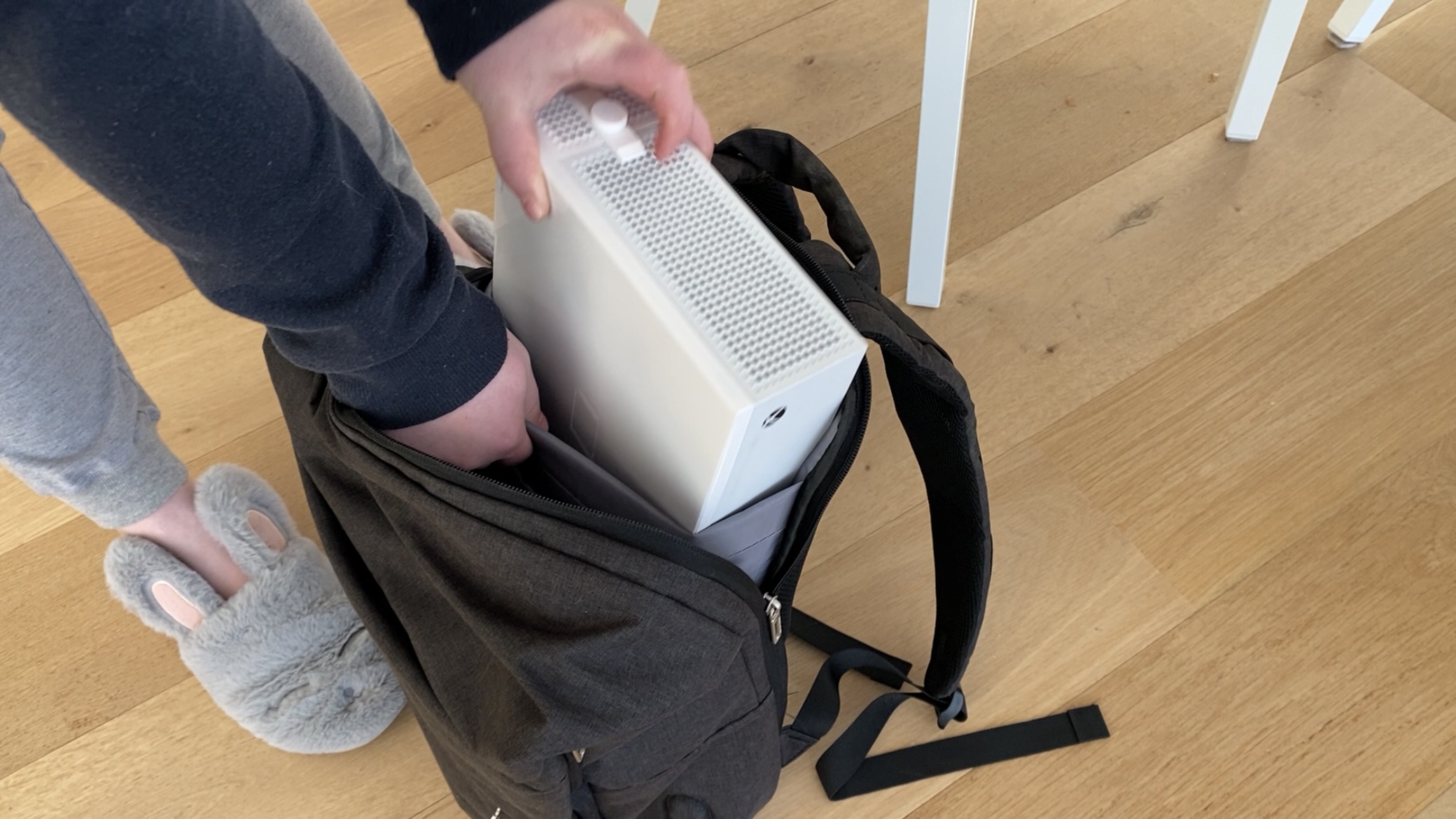 The xScreen will allow players to enjoy games on the go. Games that they previously would have had to play from home. But what have been your personal favourites to try out with the xScreen?

“We just uploaded a video of having three players together on one table playing Sea of Thieves, 2 players on xScreen and one on a Series X. This would be much harder to do without xScreen! We also love RPG games like Diablo, Path of Exile, Elder Scrolls etc. We love multitasking while playing these lower stress games at the same time as watching tv, one of our favourite uses of xScreen to date”

Finally, after the ongoing success of the xScreen Kickstarter what do you feel the future holds for UPspec Gaming? Do you see yourselves focusing on projects to complement the xScreen or broadening out to similar products for other consoles?

“Our number one focus right now is on delivering the xScreen to our loyal supporters on time. There is a lot of scepticism about crowdfunding. We are extremely focused on being a positive story. We are in the fortunate position to have our own funding to get the device into production and Kickstarter for us is about launching our brand, creating awareness and ensuring there is sufficient interest to justify the upfront costs of factory production. Based on the strong start we have had to the campaign we are pleased to say we have already pushed ahead with paying for the factory tooling and hardware development costs to ensure that we can meet the expectations we have set.

Outside of xScreen though we have a number of other product ideas in the development pipeline. Our focus is on creating unique accessories for gamers that enhance the gaming experience – primarily driven by things we wish existed but don’t. Watch this space!”

If you would like to support the xScreen Kickstarter then you still have until August 6, 2021. A pledge of $249 AU will secure on xScreen for your Xbox Series S. The targeted delivery of the xScreen is January 2022.