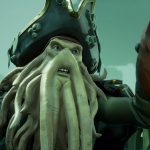 You are reading
A Future for PvE in Sea of Thieves 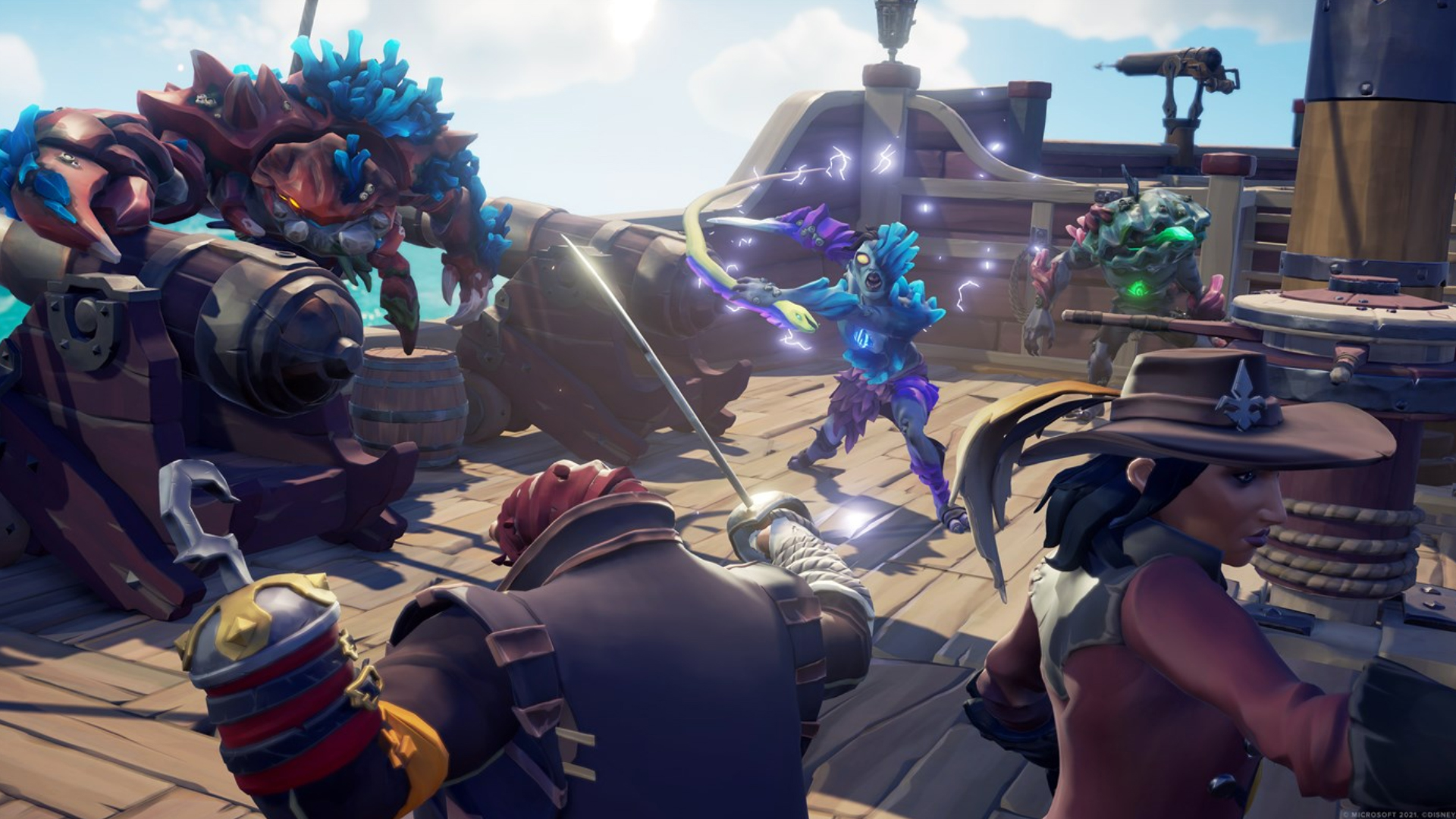 Both sides have very valid reasons for their respective opinions. But there have not been many words from Rare themselves, the developers of Sea of Thieves. However, there have been some winds of change blowing across the waves every now and then.

These winds have led us to a point where not only is PvE a possibility for the future of Sea of Thieves, it could also live harmoniously alongside the core areas of the game.

So let us take a dive into the pros, cons, and future of PvE within Sea of Thieves.

The Nature of Sea of Thieves

At its heart, Sea of Thieves is a player versus environment versus player, or PvEvP, game. This means that while you venture off to fight some computer-controlled baddies you may also encounter fellow players within the world. How you interact with these players is entirely up to you and them.

You could form an alliance and take on the menacing camp together to show the world that friendship trumps all! On the other hand, you could be having a jolly time by yourself before getting utterly rogered by your fellow players, leaving you lootless and, in the case of Sea of Thieves, shipless. 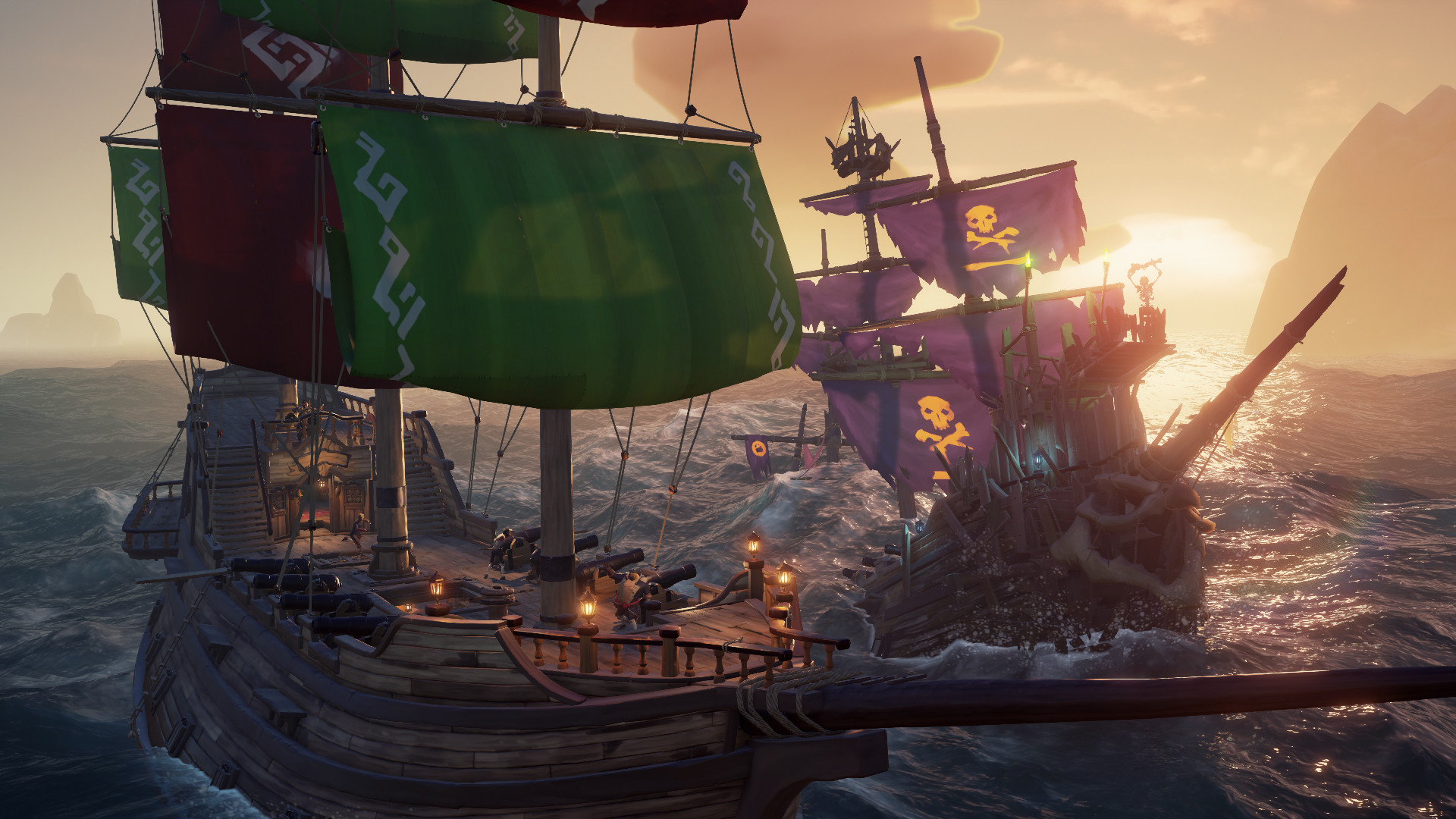 It is an interesting dynamic that, when executed well, can provide countless hours of entertainment due to the constant unknown. It also fits the pirate theme nicely as we all know pirates cannot be trusted. If there is treasure to be plundered, then a pirate will change allegiances on a doubloon.

There are some however who would also like a more calming and solo experience on the waves. They enjoy the game itself and the mechanics within but want to occasionally relax in the world. To soak in its beauty, soothing ocean noises, and have an adventure without fear of enraged pirates descending upon them.

This is where the soul of the PvE argument lies, and where the counter-arguments against it also begin.

The core argument against PvE revolves around how players feel the game was designed to be played. With PvEvP taking a central role in the structure and narrative of the game, many believe that offering pirates a choice to sail on their own server will split the player base too much.

If the player base is broken into PvEvP and PvE then there may not be enough loot-wielding pirates to interact with and the whole structure comes crashing down. 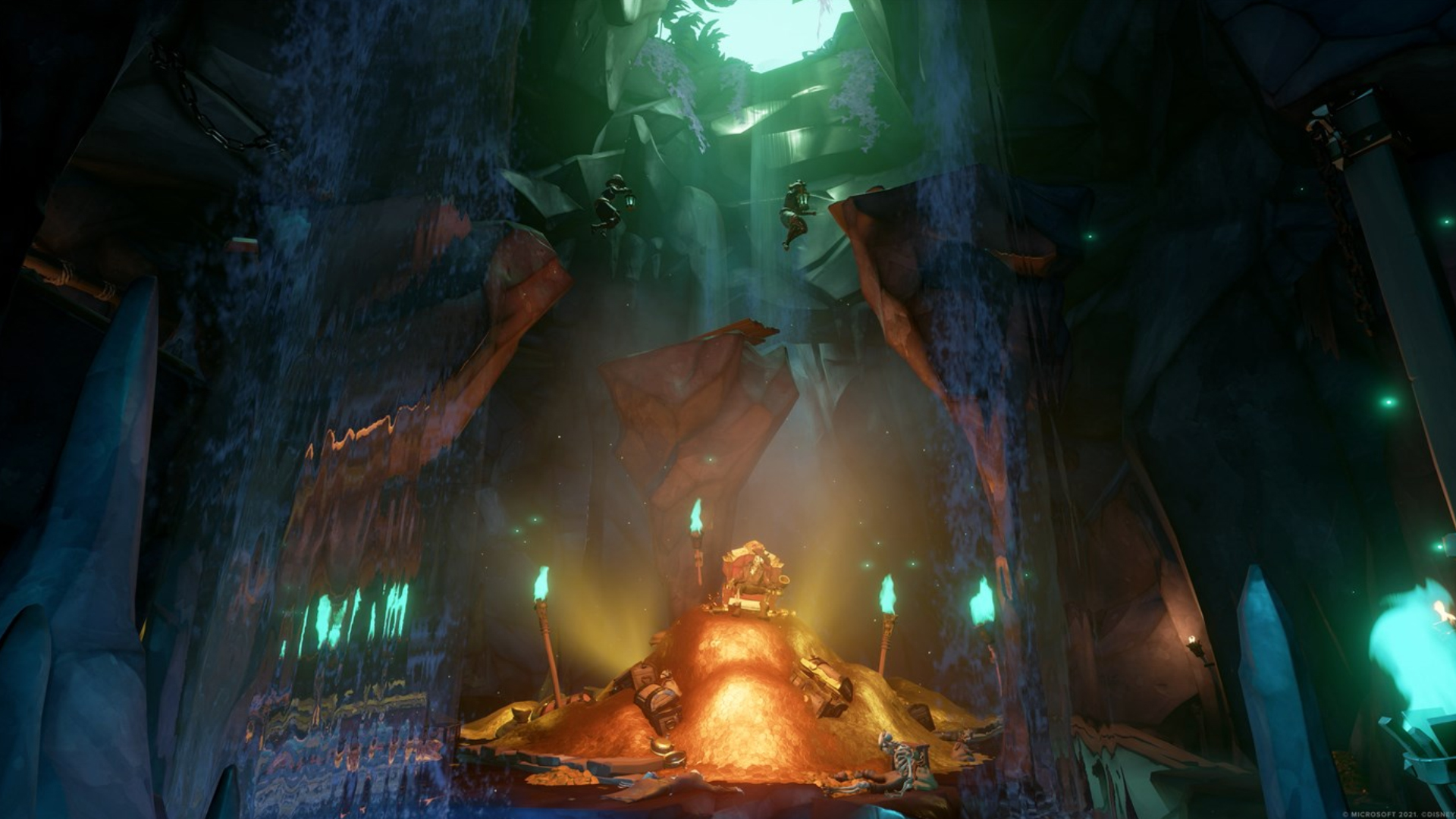 We have seen that the game can survive with separate modes when The Arena, a PvP only mode, was introduced. Furthermore, games are now providing more options than ever to increase accessibility and allow more gamers to play their way.

The key for Sea of Thieves is balance. A balance between allowing gamers to play their way while maintaining the game’s core feeling of adventure.

The other main concern when it comes to introducing PvE is the ‘validity’ of the loot a pirate earns. With the threat of any hostile pirates gone, players would be free to grind out quests, swoop up loot, and cash in on some cosmetics.

Although Sea of Thieves progression and unlocks are purely cosmetic and offer no changes to stats or abilities, players feel like they need to be earned. Unlocking a shiny new coat by surviving an onslaught of cannon fire is not quite the same as a leisurely stroll along the beach to rack up the coin for it.

Even if gamers should be able to play how they want some will feel like an item should be earned in the same way each time. 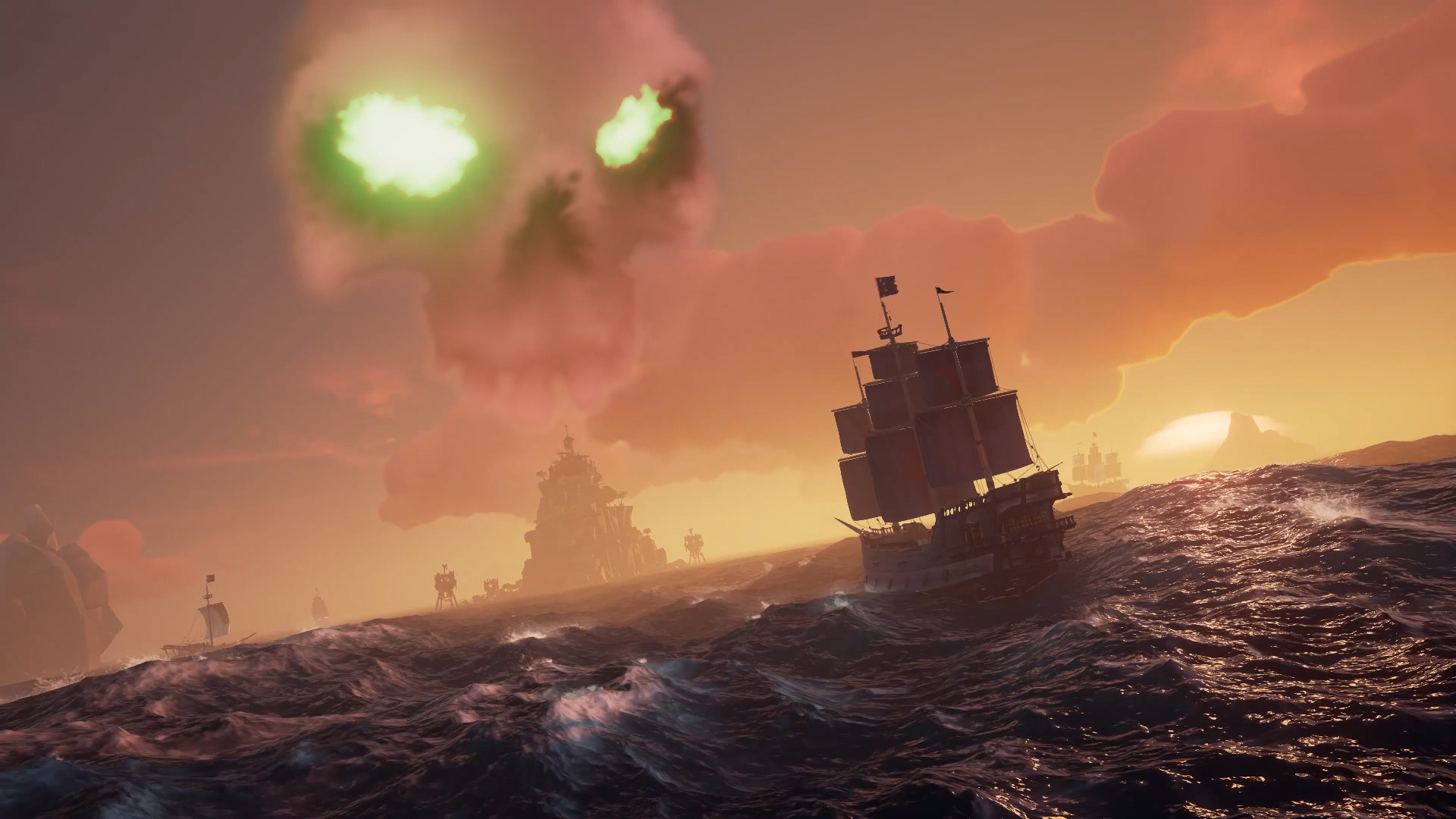 With the aforementioned arguments, perhaps providing a carbon copy PvE version of the game is not the way to go. However, PvE could still be involved in some form. In a way that compliments the main game instead of being an alternative.

We got a glimpse of this PvE style with the anniversary update and the Tall Tales that came with it.

Tall Tales are a series of quests within Sea of Thieves. Unlike the standard quests of the game, they are much more story-driven. Instead of being procedurally generated, the Tall Tales are handcrafted with a few randomisations sprinkled in here and there.

This style of quest provides a more narrative focus over the ‘make your own adventure’ layout of the standard game.

As well as being able to dive deeper into the lore due to their structure, Tall Tales also feature their own group of cosmetics. Completing Tall Tales and finding journals within them will net you with loot that cannot be found anywhere else. Similarly, the majority of Tall Tales are void of items that can be sold at an outpost.

This setup gives Tall Tale players an experience that feels more like a PvE adventure than a PvEvP one. It also does not detract anything from the main PvEvP experience. 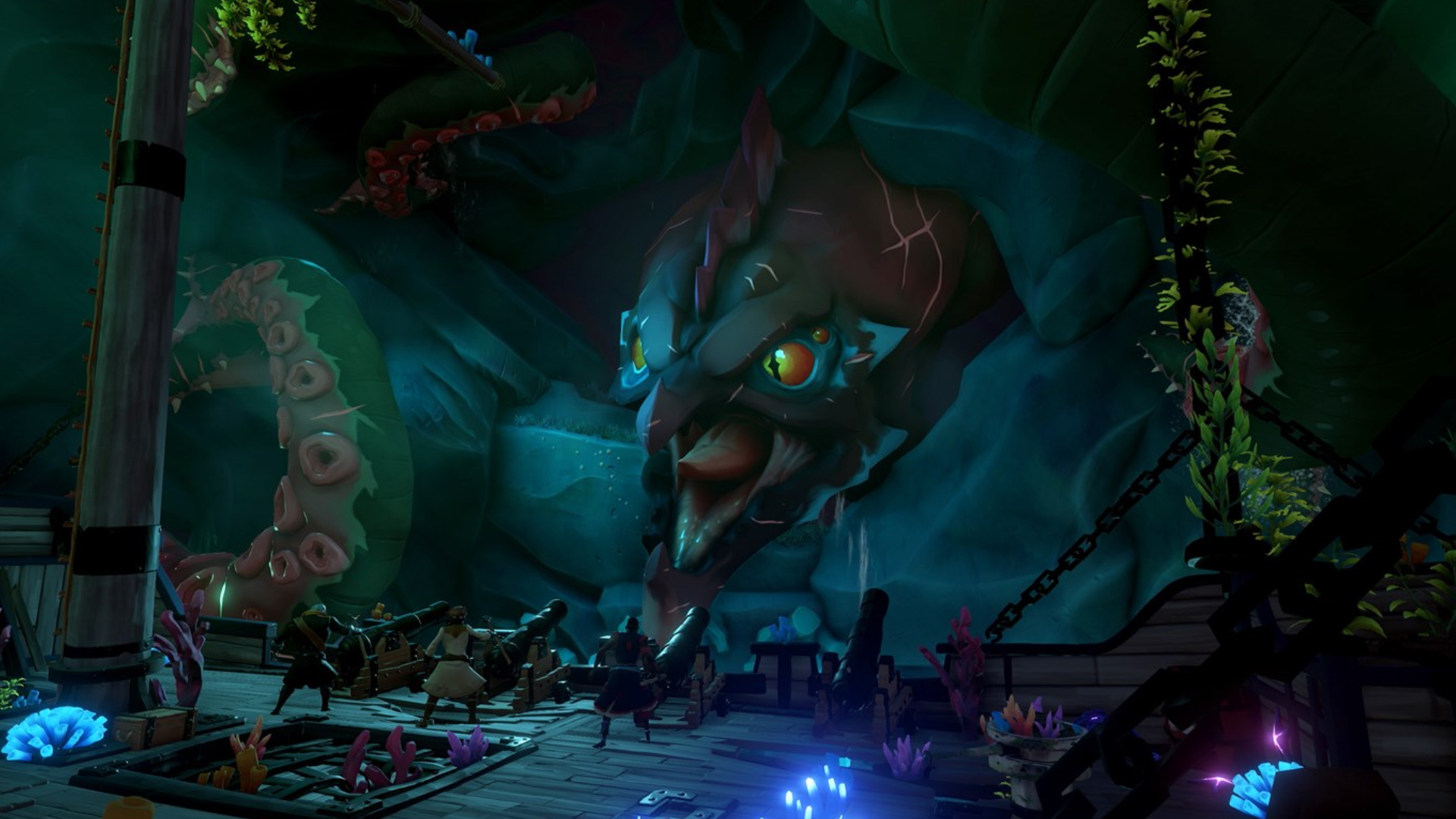 The one caveat for PvE seekers is that the initial Tall Tales take place within the main world. In other words, you still have to keep one eye on the horizon for incoming pirates while enjoying your narrative-driven experience.

While further Tall Tales were included with The Seabound Soul and Heart of Fire updates, it was not until June 2021 that we would see another big step towards a true Sea of Thieves PvE experience.

A Pirate’s Life for PvE

A Pirate’s Life, a Pirate’s of the Caribbean crossover expansion, brought with it five brand new Tall Tales. Along with new unique cosmetics Rare also wanted to expand upon the narrative focus of previous entries. They wanted players to be immersed in an adventure rich with lore and paced to perfection.

In order to achieve this, they made the decision to introduce the first fully PvE segments for Sea of Thieves.

Only that crew is inside that new world which means that we have a lot more levers as creators to make sure that their experience is unharmed by other players, and all the kind of cinematic beats of when we want things to happen all work and play out exactly as we want them to.

Several of the A Pirate’s Life Tall Tales place crews in their own instance, away from other players. Rather than an entirely separate mode, the Tall Tales are accessed via a portal within the main game, maintaining the feeling that the entire Sea of Thieves world is connected.

It is a move that enabled Rare to create the most detailed and lore-heavy areas to date and with it provide even more weight to the already existing characters, enemies, and locations of Sea of Thieves.

Without being PvE the vast details and sense of wonder in these Tall Tales would have been lost to some players. The need to be constantly on alert or being interrupted by other crews would have resulted in rushed sections and missed interactions.

The Future of Sea of Thieves 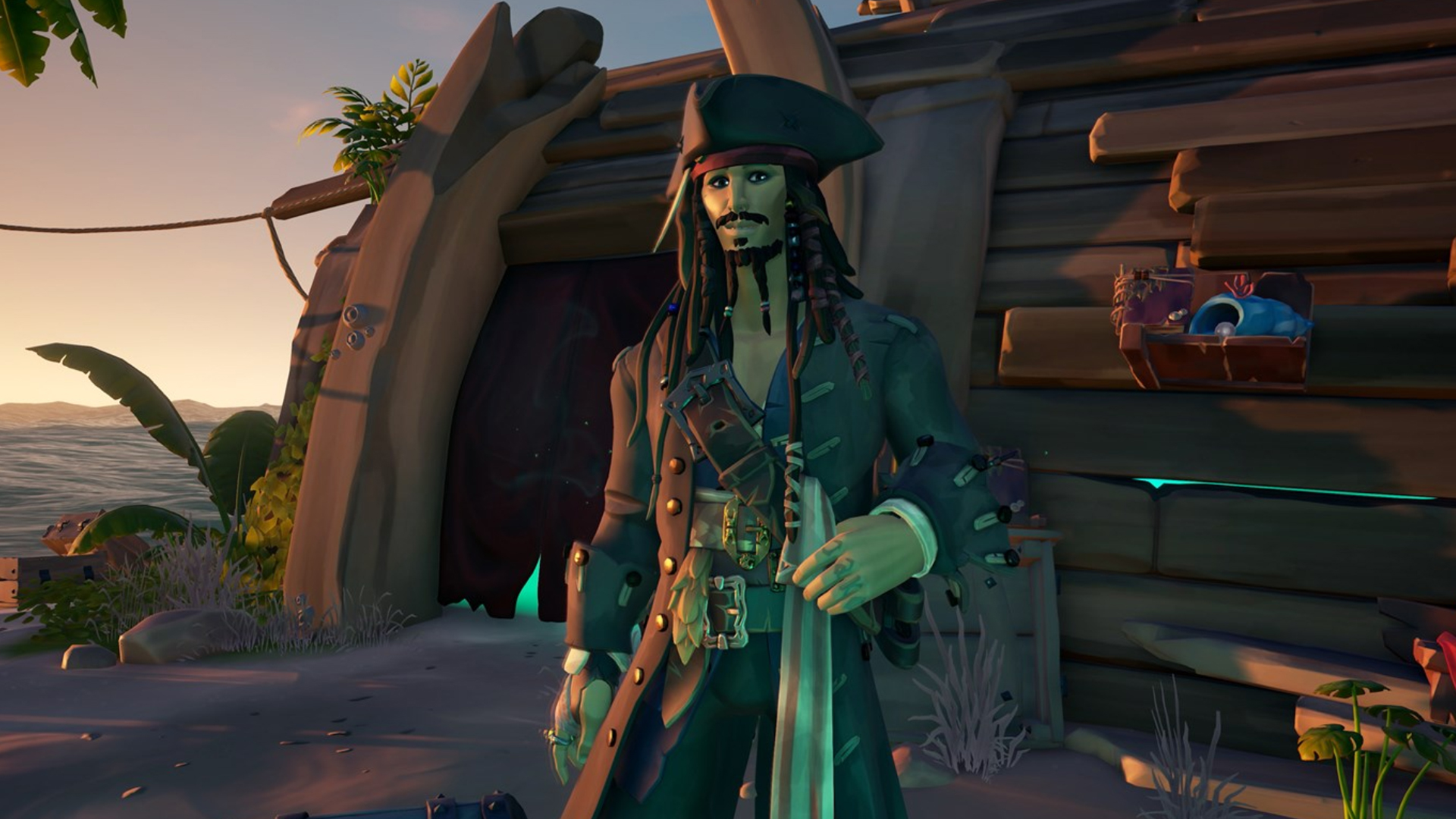 With the ability to dive deeper into the lore of the world they can provide extra emotion and weight to adventures on the sea.

A new enemy introduced to the game? Give them a dedicated PvE Tall Tale to fully dive into their backstory. Give pirates that extra motivation or internal struggle when they eventually confront them in the main world, rather than seeing them as simply another enemy.

PvE Tall Tales can be a fresh change of pace too for players who have a bit of sea fatigue. A getaway from the hustle and bustle of the main game while still remaining immersed in the world.

It can also draw in an entirely new player base. Gamers who would have previously turned their nose up at the initial PvEvP concept can be introduced to the world of Sea of Thieves in a way that suits them more.

A Sea for Everyone 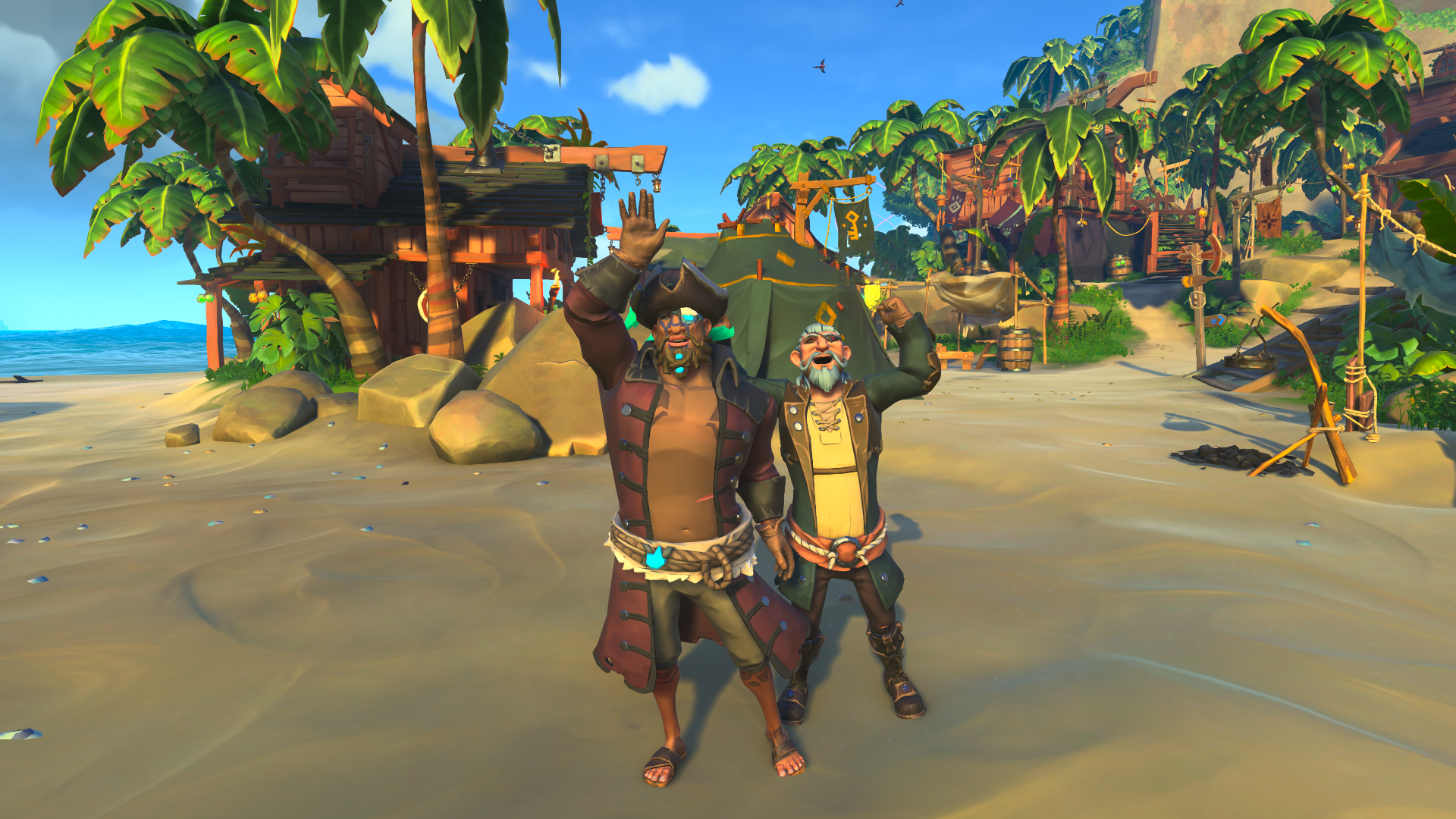 The best part of all though? These PvE Tall Tales would take nothing away from the main PvEvP game. Instead, they would complement it and work side by side together.

There is no progression or cosmetic advantage to the PvE Tall Tales as they have their own pool of items.

The player base would not be split, the Tall Tale entrances and exits exist within the main world. If anything, the PvE Tall Tales would increase the player base of the main world. Gamers with a preference for narrative-driven content could be tempted to dip their toes into the PvEvP after a Tall Tale and stick around for longer than intended.

PvE Tall Tales could also provide new players with a better tutorial than the short Maiden Voyage. Giving them plenty of time to get to grips with the game before confronting veteran players.

Rare has been slowly crafting this PvE future since the introduction of Tall Tales. A future where the Sea of Thieves world grows bigger together instead of split. Where every character, enemy, and island have a deeper meaning and purpose. Most importantly, however, a future where there is content for everyone, with no one’s preferred style of play being harmed in the process. Maybe, just maybe, Sea of Thieves longest battle is finally coming to an end.