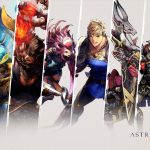 You are reading
Astria Ascending Review 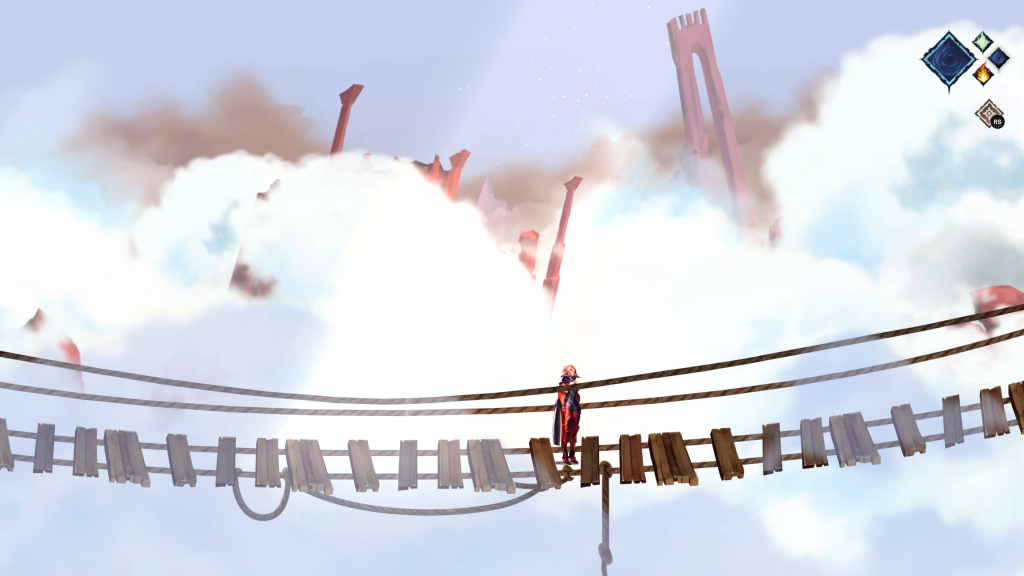 Astria Ascending is a side-scrolling Metroidvania turn-based JRPG developed by Artisan Studios. Orcanon is a peaceful realm, full of a slew of unique races and the demi-gods who protect them. But when a string of random attacks occurs across the land, it is up to the 333rd Company of demi-gods to keep the peace. Even if they are not long for this world, they are duty-bound to find the source of the chaos and stop it once and for all.

Of Harmony and Demi-Gods

In Astria Ascending, you play Ulan, commander of the 333rd Company of demi-gods. In the canon of the game, demi-gods live for only three years, and during that time are charged with protecting Orcanon and its Harmony. However, in their final months, attacks from strange creatures called Noises spring up in each of the realms. It is up to the demi-gods to stamp out the evil and find who is responsible for the attacks. This sends you on a journey across each of the realms and into the various temples of their deities. There you will find the past sins of some of the demi-gods responsible for the events, and face the consequences of their actions head-on. 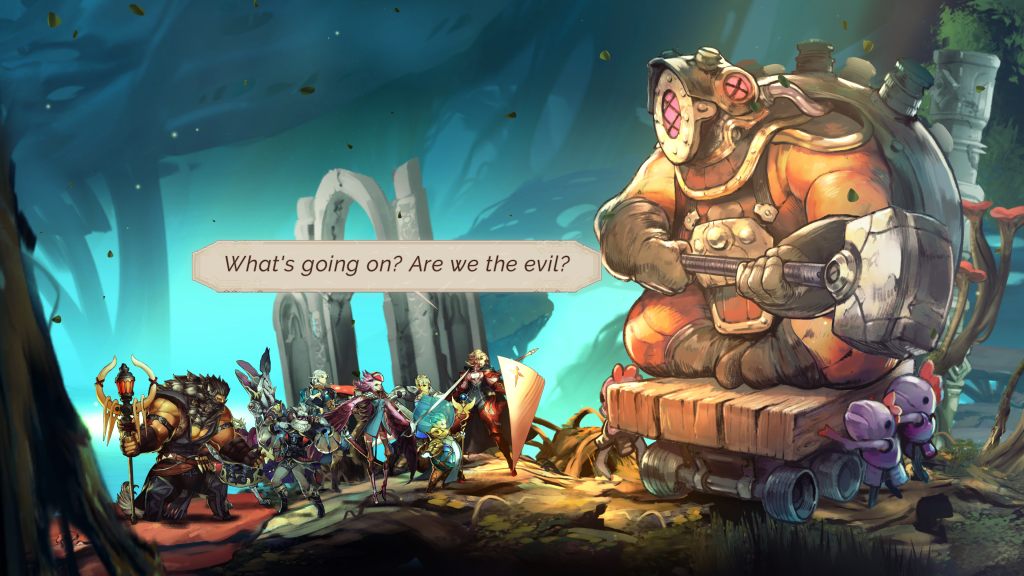 The story tells itself in a very basic, yet interesting format. It is more of a checklist as you go to each area and fight through enemies as events unfold. But as you continue, you begin to see bits and pieces of societal biases and very real dynamics. For example, interracial romance is portrayed as controversial and those who practice it are shamed for it. Dagmar the “Arktan” demi-god witnesses love blossom between races which he opposes, even when it occurs within his own family. Minor character traits become catalysts for irrational hatreds, Eko the “Peyska” demi-god who is made fun of for being short. All this while having societies turn against the Harmony the demi-gods have protected for nearly a millennia after accepting it as the norm.

It is all very interesting, but the story lost impact, as the overarching plot began to drown out any emotional moments or messages in the writing. There are jarring tonal swings that will give you narrative whiplash. One moment can be about human behavior and long-standing prejudices, and the next is about where the demi-gods needed to go next and anguish over who they need to chase and fight. This conflict aside the game had plenty of surprises to keep it from being boring.

The Beautiful Sights of Orcanon

Astria Ascending boasts unique hand-drawn 2D environments and characters. As a result, the expanses of the world of Orcanon is wonderfully detailed. Every zone feels unique from its layout and, setting to its weather. From a basic city bathed in light and reflective surfaces to swamps with ruins covered in rain and wind. Rolling hills of green grass give way first to deserts with wood scaffolding and cacti, and then to nightmarish dark woods with webs and acid floors. Each city you stop in to buy new equipment, accept hunting missions or side quests all have lovingly drawn and detailed characters. In particular, the Peyskas, like Eko small amphibians in suits of water, and the Arktans like Dagmar which are hulking animal-like beings. The designs are unique and enrapturing.

The variety of locations and characters is a breath of fresh air. The same can also be said for how you interact with them. The levels are laid out in typical Metroidvania fashion. Basic platforming, like jumping, is enhanced by several powers you unlock throughout the game. Novel abilities like a light that triggers switches, or a fireball to burn down walls are just the beginning. Your abilities can be enhanced, for instance by making the fireball protect you from extreme heat in some of the levels when you use it. These abilities and enhancements open the world up to even more exploration. But to go even further, the game has a shoot-em-up mini-game that is used to access certain late-game areas. 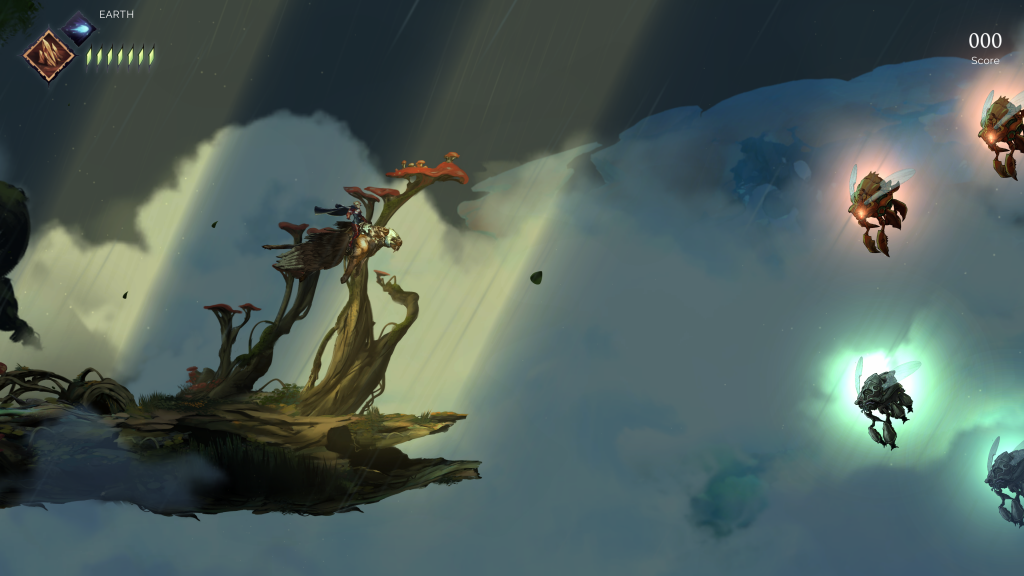 It is very basic, with just a boss at the end of them but it adds to an already refreshing adventure. All of this made my trips across Orcanon in service of its story, exciting. Even the puzzles present in each of the deity temples kept me engaged.

Speaking of engaging, Astria Ascending has a unique and challenging spin on old-school JRPG combat. You have a team of four going against numerous enemies on the other. How it spices things up is the integration of the “Focus” system. Enemies have weaknesses and resistances to certain forms of attacks. When you hit a weakness, it will give you two focus points, while hitting one of their resistances takes away a focus point. Hitting them with something they are immune to, however, will take two points away. Fighting enemies then becomes about finding and exploiting their weaknesses to gain more focus points. These points are then used to boost your attack damage. 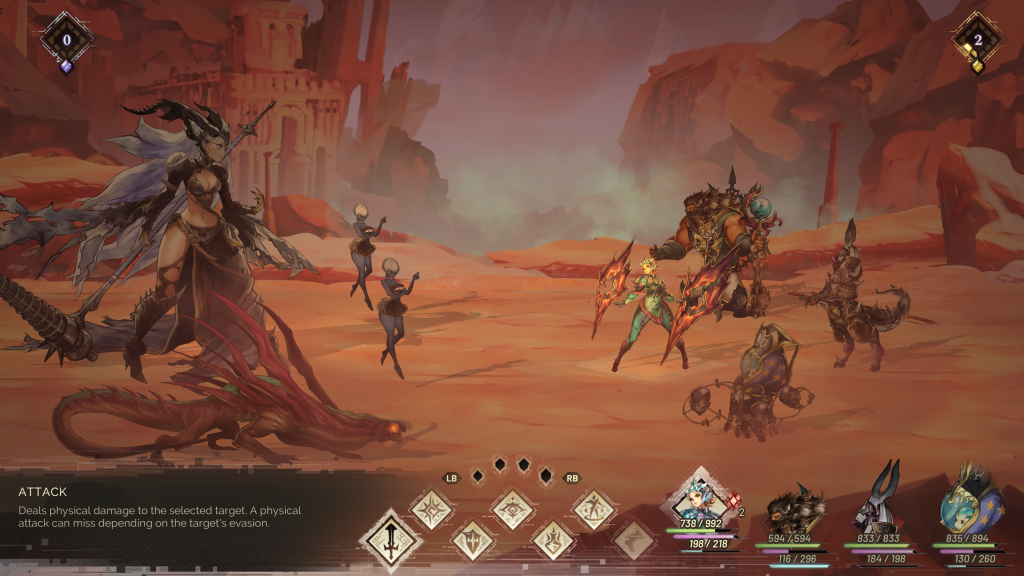 Enemies also have the focus system as well. By hitting your weaknesses with boosted attacks, they get to keep those points spent, something you can use to your advantage. Some enemies have no intrinsic weaknesses so having a character that can inflict a weakness will speed up combat. This makes each fight unique through interesting enemy combinations that kept me on my toes.

To go hand in hand with the combat in Astria Ascending, the same depth can be found in its tedious but rewarding skill trees. The skill trees for each character are expansive yet expensive. Enemies only give a few skill points per match but every node can go up in costs to the hundreds. It does not appear bad in the beginning, but when you unlock every class for each character, it becomes more of a game of micromanaging. All upgrades are crucial, but the number of skill points you naturally obtain can not unlock everything unless you commit to the game’s perceived grind. Between health, attack power, andpassive ability unlocks, it is deep, but the grind is offputting. 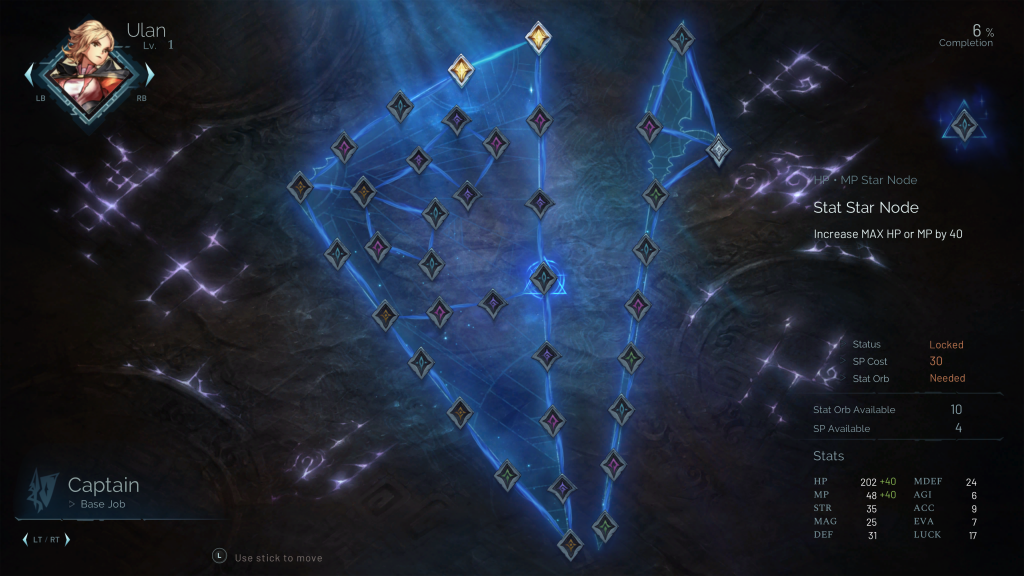 A way to break up the monotony is the mini-game, J-ster. J-ster is a surprisingly fun distraction you can initiate with random NPCs. This token-based mini-game is a fun distraction with no real purpose other than your own enjoyment. You can collect various tokens from random encounters, bosses, or through side quests. The fun is dulled by the fact that some encounters randomize the tokens you can put in your hand. This can almost be a near-instant game over. Nevertheless, it provides a relaxing break from exploring the world. 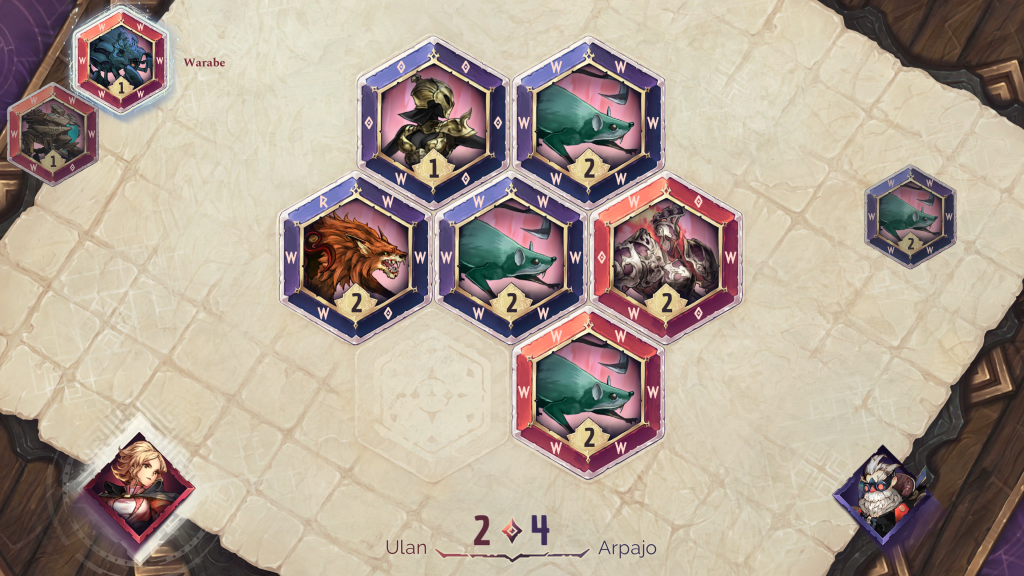 Astria Ascending’s launch has to be the only real strong downside to this otherwise wonderful experience. I was playing on Xbox Series X, where the game looked beautiful. However, the state of the game at launch is unacceptable. Regardless of its status as an indie game, frequent bugs that result in a lack of main menu input detection are ruinous. When the game will not allow you to start or load your save and the only fix is restarting your system, it just kills the experience. This is a problem that was present in the recently released Cris Tales. As a result, it is being review bombed on Xbox and has still not been patched at the time of writing this review.

Knowing I had to restart my console to even play this game is a real quick way to make me not want to play this game. Also, there’s a DLC pack for weapons and equipment you can buy at a low cost. But when I bought it they were not in my inventory, nor in any shops making them a waste of real money. Also present in the game is a lack of flow in cutscenes. You can notice when the voiced dialogue clip is ending and when the next is being played. The cutscenes themselves feel very stilted as a result. It is a shame as this happened during important parts of the game breaking the flow of the performance. 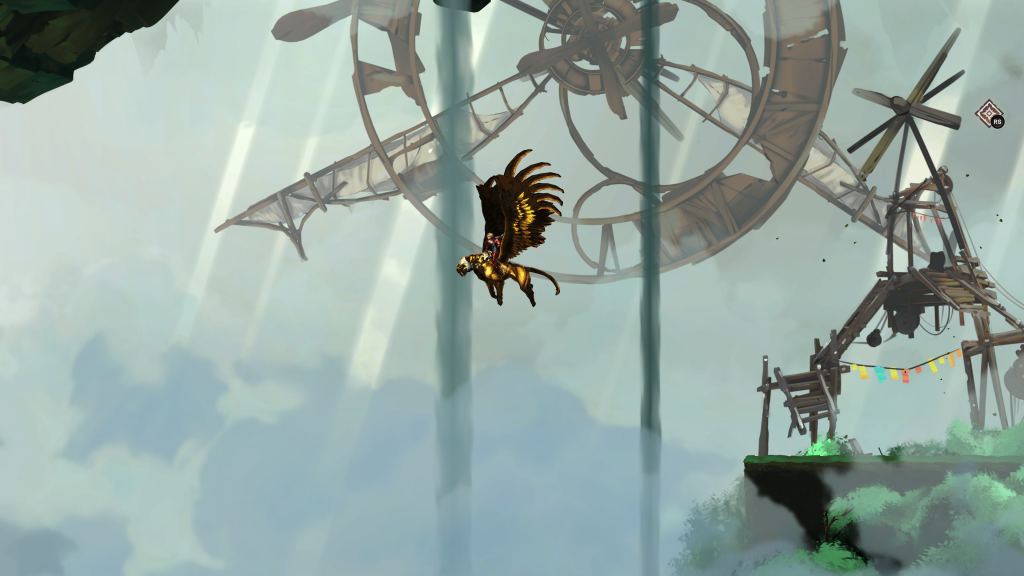 Some of the voice acting felt lifeless, and some of the audio for characters felt low compared to others as well. The game would freeze sometimes when a match was over. In the late areas, temple introduction cutscenes wouldn’t initiate. Leaving or moving to the next room would cause a freeze as well. The game never crashed, but the freezes might as well count as such.

Astria Ascending is a fantastic throwback to classic JRPGs. Its story may not be remarkable, but the overall gameplay experience makes the game memorable. The deep combat with the customization and unique boss battles with excellent enemy variety is what kept me playing. In fact, knowing how the game works now, I have been hungry to start a new playthrough with different character class combinations as I progress. It will be hard for players to pick up if they are not used to turn-based gameplay. However, fans of this style of game will be in for a fantastic treat. But if you are on Xbox I cannot recommend playing this game in its current state. When it is patched and you can get past the main menu, then feel compelled to pick it up.