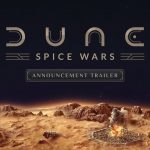 You are reading
Dune: Spice Wars Is Coming to PC

With the success of Dune in theaters and at home. It was only a matter of time before we got a game. Having characters skins in Fortnite just doesn’t cut it for me. Tonight during the Game Awards Dune: Spice Wars was officially announced.

Shiro Games is bringing fans a needed injection of Dune RTS gaming. The epic sci-fi franchise has had some games in the past. Now players will be able to enjoy Dune: Spice Wars on PC. Take a look at the announcement trailer. Remember the spice must flow.

It is nice to see that Dune: Spice Wars will be coming to PC next year. A console version would also be great for those players that don’t have access to Steam. If you didn’t grasp what this game is about take a look at the brief description taken from the games Steam page.

A real-time strategy game with 4X elements, from the developers of the critically acclaimed Northgard. Set in Frank Herbert’s groundbreaking Dune universe, you must lead your faction and battle for control and dominance over the harsh desert planet of Arrakis.

Next year look for this game to be released in Early Acces on Steam. Add this title to your wish list tonight. Are you excited to see Dune getting a new game? Let us know in the comment section below. If you missed some of the Game Awards tonight we have what you need.
Facebook Twitter Google+ LinkedIn Pinterest Tumblr
Previous article Crossfire X Is Coming To PC and Xbox Series Consoles This Spring
Next article Elden Ring Gets New Dark And Lore Heavy Trailer