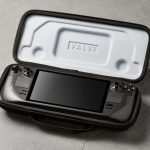 You are reading
Steam Deck Review: Is It Worth The Wait?

Nearly a year after our first Steam Deck order was placed, our unit has arrived. Valve’s new handheld PC hopes to regain the ground lost to mobile devices and the Nintendo Switch. The cost-effective gaming PC on the go opens your PC library up to a new form factor. While it may not open your pocket, it certainly does open your backpack to a brand new way to play. Now that we have had our unit for some time, we ask, is it worth the cost?

When you unbox your Steam Deck, the first thing you are going to notice is its size. Of course, you can see thousands of pictures and videos online but, they genuinely do not do it justice. I was taken back when I first held it in my hand, it is huge. The 23.6 ounce Steam Deck weighs nearly twice as much as the OLED Nintendo Switch. While a difference of two inches or 5 cm does not sound like a lot, the Steam Deck feels significantly wider than the Switch.

For the most part, I love the size, it fits me perfectly. The buttons and the dual mouse pads are ergonomically arranged around the 7 inch display. The size feels right but after countless hours of playing for our content, I developed tennis elbow and forearm fatigue. Had I been playing normal healthy hours, this would not be a problem. I should also note the Steam Deck gets very hot. If you are prone to Eczema rashes on your hands from heat, the Steam Deck could be a trigger.

Yet I am now convinced this is not a suitable form factor for kids. The smaller, lighter Nintendo Switch is a better form factor for kids 6 to 12 years old for sure, I just do not see my nieces and nephews holding onto the Steam Deck as long as they would a Switch. It is too big and too heavy for kids. As for teens and young adults, a gaming laptop would be a more versatile tool to meet their needs. Although The $400 entry point tied to the Steam Deck may be a better option for some. 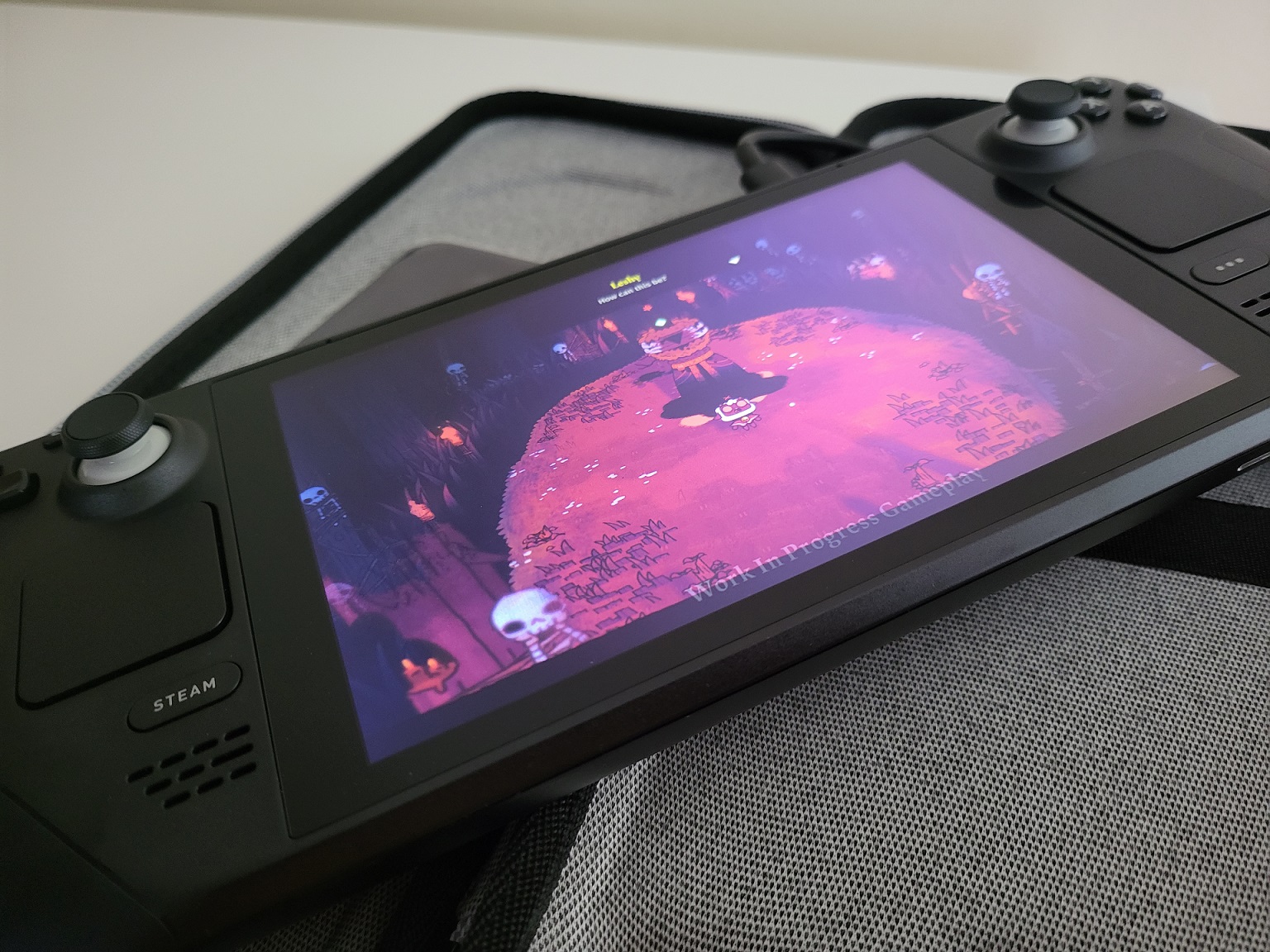 Once you get past the size, you will notice the dual touch-mouse pads on the front, these have haptic feedback. I almost never used them over the joysticks while playing but they may serve as an accessibility feature for disabled players. Next to that are adjacent joysticks, four traditional face buttons, select, and start. Around the back, there are 2 back buttons on each side, along with L and R bumpers and triggers. There is also a gyroscope that many games can use for movement.

On the left there is a Steam button, this functions much like the Xbox logo button or PlayStation logo button on their respective controllers. This button brings up the system menu and pauses the game. On the right side, there is a delightful “Quick Access Menu” button. This brings up detailed information on performance and allows for audio and visual settings.

The Steam Deck comes in three models centered around storage, there are 64GB, 256GB, and 512GB storage options. While the 256GB and 512GB storage options use faster NVMe SSD chips, the 64GB model uses a slightly slower eMMC SSD technology. The difference between the two is not going to change the way you play, it is not very meaningful. The 512GB model also comes with an anti-glare etched display, handy in the sun. The three models are priced as follows, $399, $529, and $649.

Is The 512GB Steam Deck Overrated? 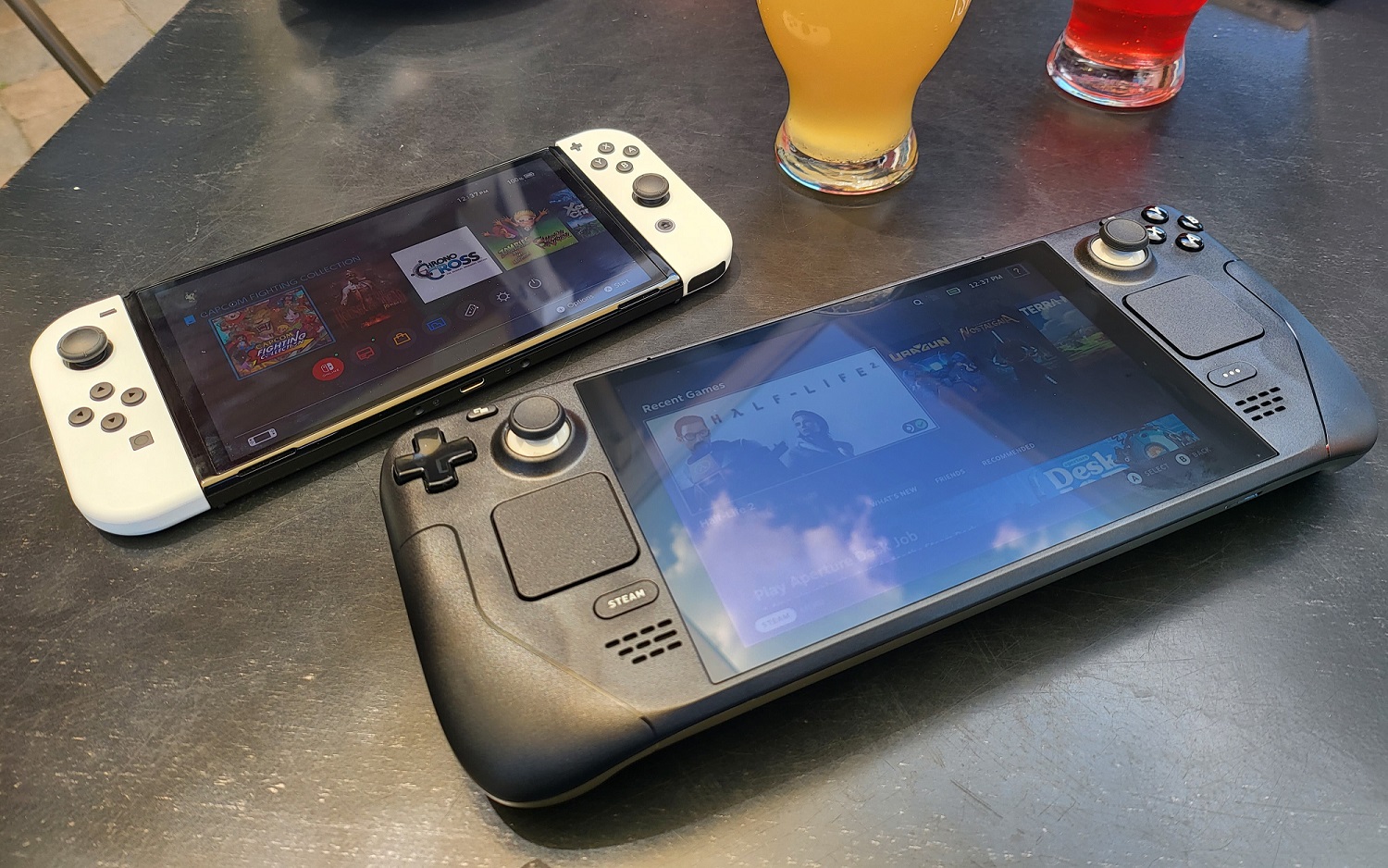 When it comes to storage all three models support microSD cards for memory expansion. With that, if you have over 500GB of games, even on the 512GB model you are going to be playing off of the external storage. Given that, there may not be a significant technical advantage between the $649 model compared to the $400 model. Once you start adding in keyboards, mice, docking stations, and protectors, the 512GB model begins to approach the price of mid-tier gaming laptops.

The equivalent laptop as of writing would cost somewhere between $900 and $1200. Knowing that creates value for the 64GB model. While the 512GB model with all the accessories prices itself against tougher competition.

Under the hood, the handheld is packing a custom GPU with 8 RDNA 2 CUs with a clock speed of up to 1.66GHz. Along with 16GB of RAM and a custom Zen 2 CPU. With its custom architecture, it’s difficult to compare it one to one with a desktop or laptop GPU. Although a close comparison could be the 1050 or 1050TI.

Powering the GPU is a 40Whr battery which Valve claims lasts two to eight hours. While that is true the battery lasts three to four hours while gaming. This is incredibly dependent on what game you are playing. As a measuring stick, it is on par if not better than the very first Switch model. Which is a win for the Steam Deck as it runs games at a higher resolution and frame rate.

With the 1280×800 60Hz display, you will of course be limited to playing games in that format while handheld. If you add in a lack of high-end HDR with a limited resolution, the Steam Deck can play nearly anything in 60 frames per second. The GPU has 1.6 TFlops of computing power running on an ultra-thin custom OS. None of the computing power will be used to produce ultra-high resolution textures or lighting. Every bit of power the Steam Deck has is solely focused on running games smoothly. A feat the Nintendo Switch has struggled with even at its 720P resolution. 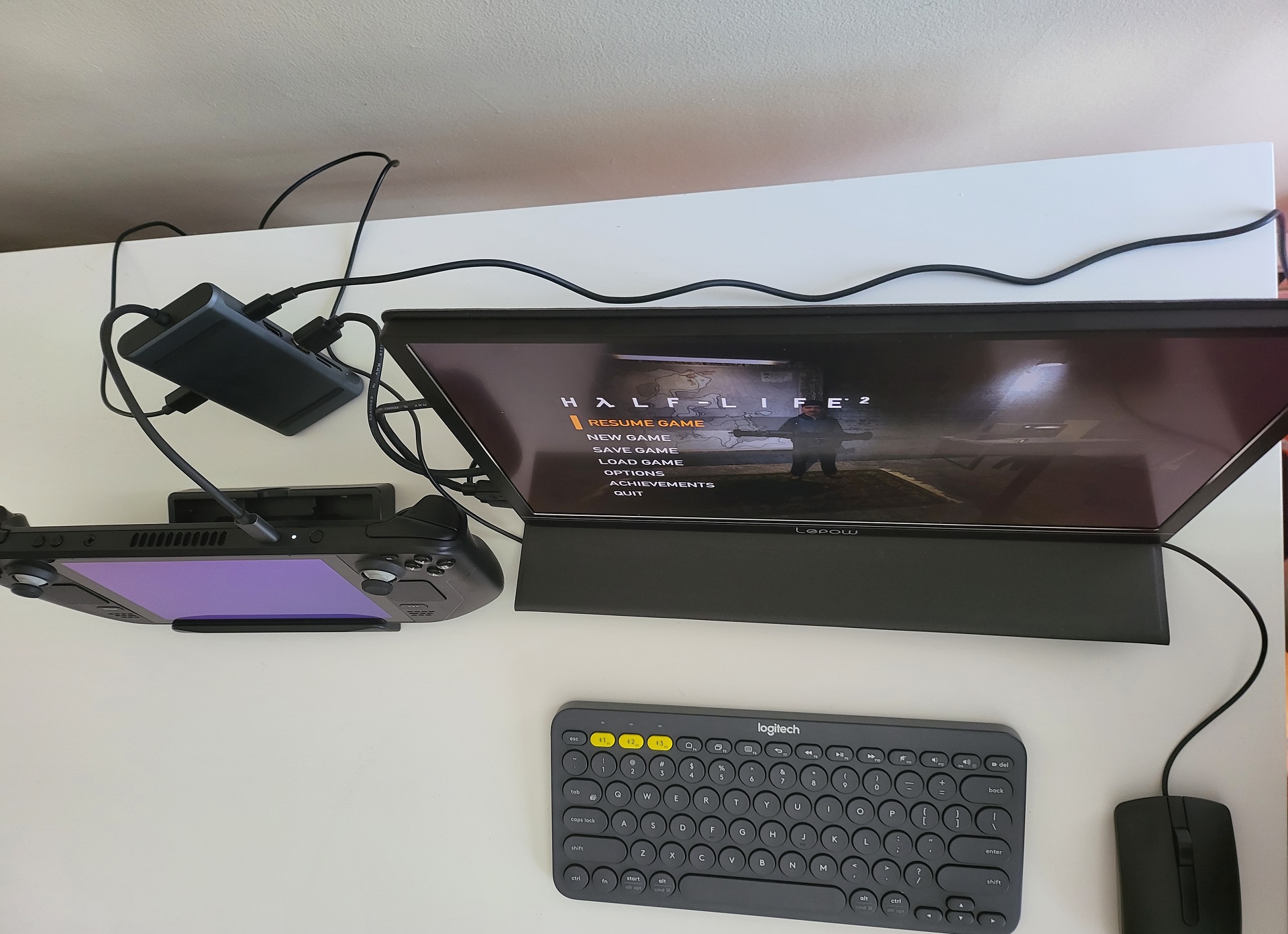 As for the accessories, I am going to refrain from buying any sort of protector. The Steam Deck feels rugged and durable and the last thing I would want to do is make it any bigger or add any weight. While I am sure it is not as rugged as it appears, and I will eventually one day drop it, I just do not have the desire to add anything to the device itself.

These devices are now more like hubs than they are docking stations. You are going to want to find something with 100W power delivery to be able to charge the Steam Deck and “dock it” with one cable. This gives me the option to connect any USB device as well as different display types via HDMI and USB-C.

Whether you use a docking station or the Steam Deck’s built-in controls, the desktop under the Steam OS interface is reachable with two clicks. From there you can install anything, and I mean anything that will run on Linux. Steam OS even has an interface for non-Steam games if you feel the need to install anything else outside of your Steam library. This other software will show up right on your homepage alongside your games seamlessly.

Will My Games Work?

When it comes to content Valve has done a terrific job getting games up and running on the Steam Deck. We have talked with countless developers, and the general consensus is that it’s easy to get games up and running on Steam Deck and that Valve has been a great help. In conjunction with my Steam library, I have tested many “Early Access” games, as well as demos from this summer’s Steam Next Fest. Most of these games are not even published, many are still in development. In one case did I have a problem running a game on the Steam Deck and the issue was tied to an unfinished game.

For those looking for assurance, there are over 2,000 games listed on the “Great on Deck” page in the Steam store. Plus there is a tool that will verify the status of your Steam library. With that said, nearly all of the games that I have played do not have the “Great on Deck” label and I have not had any real problems. Games without the “Great on Deck” label have a community-driven feedback indicator with an amber “playable” marking. Meaning that it is unverified by Steam but, players are able to report working games.

The Pros and Cons Of The Steam Deck 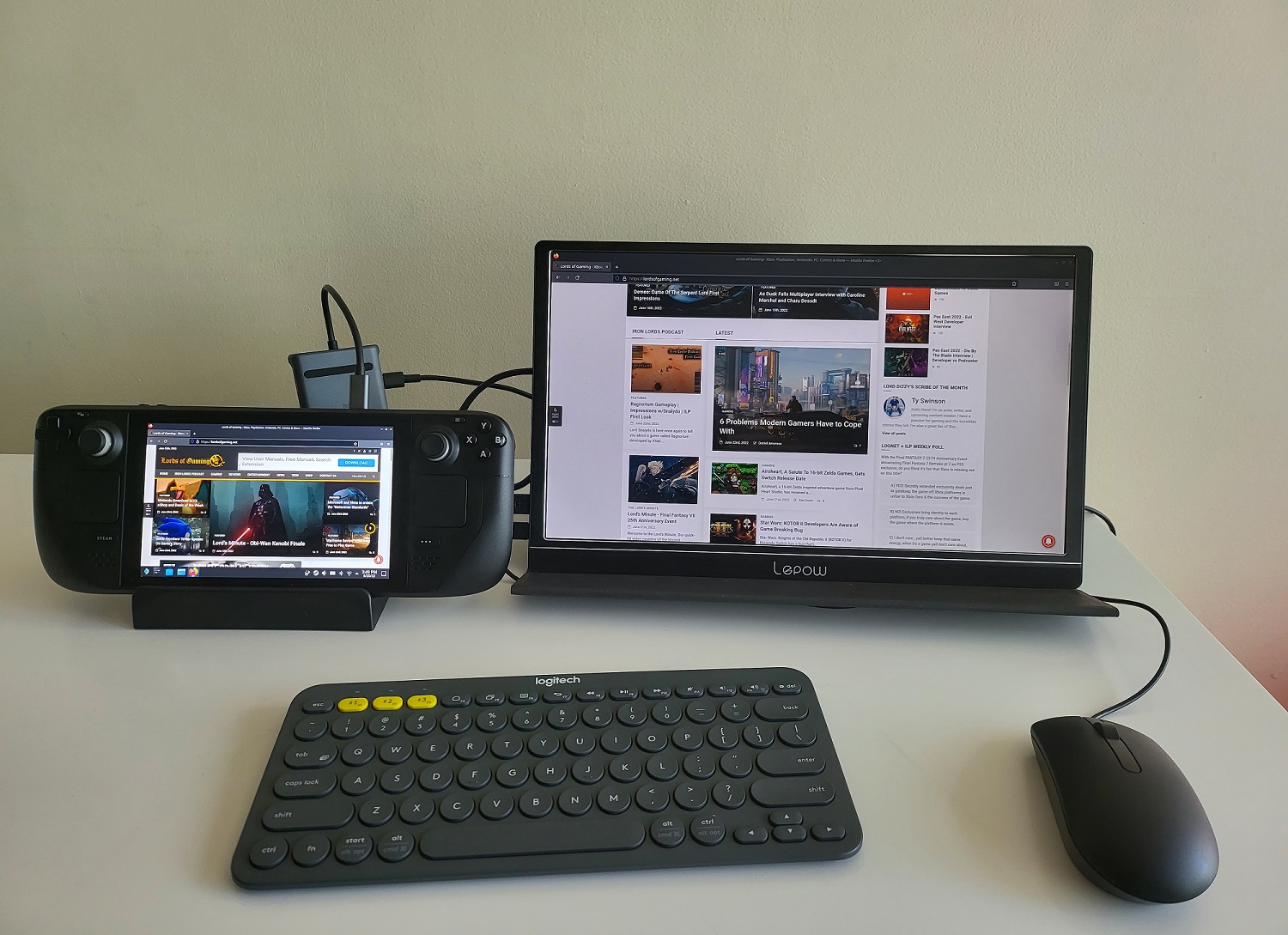 Like anything, the Steam Deck has its pros and cons. I would not purchase a Steam Deck for kids due to its size. I do not think this is the appropriate device for casual gamers due to the nearly one-year wait for backorder and cost. Plus I do not see the value in the 512GB model with accessories over a mid-tier gaming laptop.

With that said, Valve has done nearly everything that they can to get an affordable gaming handheld in front of your Steam library. At $399 it is nearly $500 less than the competing gaming laptop. The custom Linux OS and the single USB-C port make the Steam Deck a Swiss Army Knife for gaming that can play just about anything.