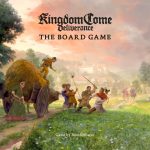 You are reading
Kingdom Come: Deliverance the Board Game Preview

There are video gamers, board gamers, and Tabletop RPG gamers. While these are typically somewhat discrete communities, every so often, you will find a truly special geek like me who belongs to each of them. What is even rarer is to find a single product that brings out the best of those three art forms. That is precisely what Boardcubator aims to do with Kingdom Come: Deliverance the Board Game.

With its unique design incorporating technology, RPG-like character progression, and the irreplaceable feeling of sitting around the table with friends, Kingdom Come: Deliverance the Board Game takes on a herculean task of bringing all of these elements together in a way that is cohesive and satisfying. If the final product matches what I experienced in the preview, they just might pull it off. 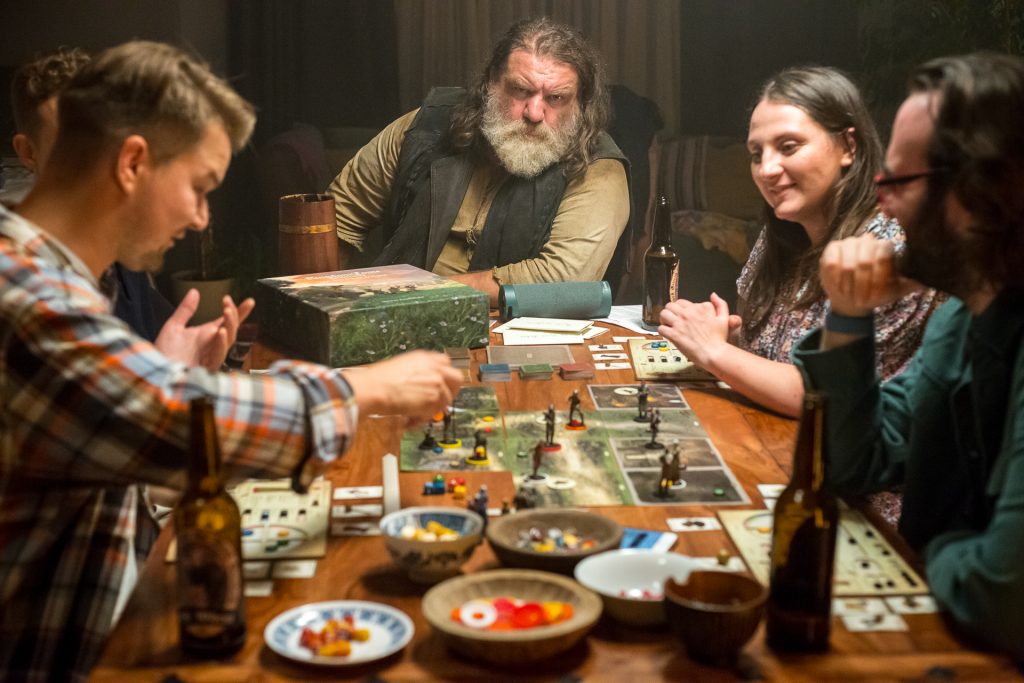 In our preview, we got to play through the first scenario of one of the campaigns the game will feature at launch.

Similarly to the video game that preceded it, Kingdom Come: Deliverance the Board Game takes place in Bohemia in 1421. Unlike many other medieval-themed games, Kingdom Come has no wizards, dragons, or magical draughts. Further, the player characters are not queens, princes, or knights. Instead, in the preview, we had the option of playing as a peasant, an inquisitor, or a religious sister.

From there, you set out to explore an ever-expanding map, looking for the information your Bishop seeks. And, if your experience is like mine, you’ll quickly run into (sometimes bloody) reminders that you are nobody of significance. You begin as pawns in others’ political and religious rivalries, working to help the side you think is right. Where it goes from there, I’m excited to find out.

Despite the lengthy rulebook we received for the preview, the game plays surprisingly simply and smoothly. As your party explores the expanding map, you will discover new people, objects, and situations with which to interact. Many of those interactions require players to perform skill checks based on their character’s stats, with success or failure producing a variety of results. Many also award perk points, which players can use to advance their character’s base statistics or add unique perks. As your characters get better perks and attributes, they can take on more challenging skill checks. From there, the gameplay loop continues.

Much like traditional tabletop RPGs, the game only requires one person around the table to know the rules intricately. If everyone else understands the basic rules, everyone at the table can have a rich experience. 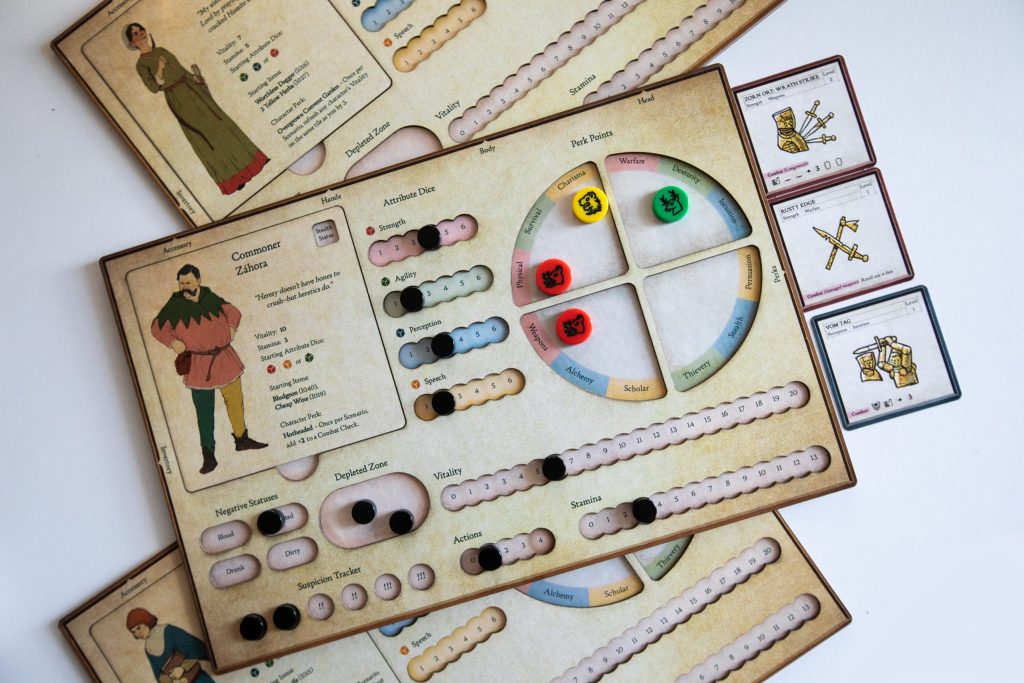 From the start, I loved how drastically a character’s attributes affect their chances of succeeding on a skill check. As an avid fan of Dungeons and Dragons: Fifth Edition, one of my criticisms of that system is how much success or failure relies on the roll of a single 20-sided die. Because there is such a wide range of results you can get from a d20, it always felt that your character’s statistics did not influence their odds of success enough compared to the roll itself. As a result, characters often feel mechanically similar until the mid-to-late levels of a campaign.

That is certainly not the case in Kingdom Come: Deliverance the Board Game. In this system, every skill check is done by the player rolling six six-sided dice, aiming to get as many “hits” as possible. Each check requires a certain amount of hits. If the player meets or exceeds that number, the check is successful.

Attribute scores determine which dice you use for a check, with higher levels enabling you to use specialized attribute dice. Basic dice (or dice from unrelated attributes) each have a 1-in-6 chance of producing a hit. However, with attribute dice, the odds become 1-in-2. If I maximized my strength score, for example, I would use six strength dice for any strength check, dramatically increasing my chances for success.

Through this system, each player-character feels uniquely suited to particular tasks, even from the earliest moments in the game. This encourages cooperation among players and quickly turns your peasant or nun into an essential cog in a team.

The idea of a “living game world” is undoubtedly familiar to most video gamers. Marketing teams often want to persuade consumers that the world reacts to the player’s choices in meaningful ways. Some video games even pull it off pretty well.

However, I have never seen a “living world” attempted in a board game until playing Kingdom Come. Any time you take any action through the app, the world and many of its characters may “take an action” of their own.

One example of this occurred early in my preview. After exploring a new tile, I distracted a particularly detestable vagabond harassing a woman in flight from a burning building. My distraction provided enough time for the woman to get away. I expected that to be the last I saw of either of them.

To my surprise, a short while later, that same bandit made his way back onto the map, apparently in a sour and violent mood. By that point, my tablemate and I were weakened from other combat encounters. If we ended up on the same tile as him, we would likely get caught in a combat encounter that would see one of us killed. So we attempted to anticipate where he would go on each refresh and avoid him until we could heal. By sheer luck, we succeeded and ended up dealing with him when we were both healthy.

This mechanic makes every decision you do not make with your limited actions just as weighty as those you do. Further, it allows tense situations like the one I just described to come up organically. This living world was well-realized in the preview, and I am excited to see how it is implemented throughout full campaigns. 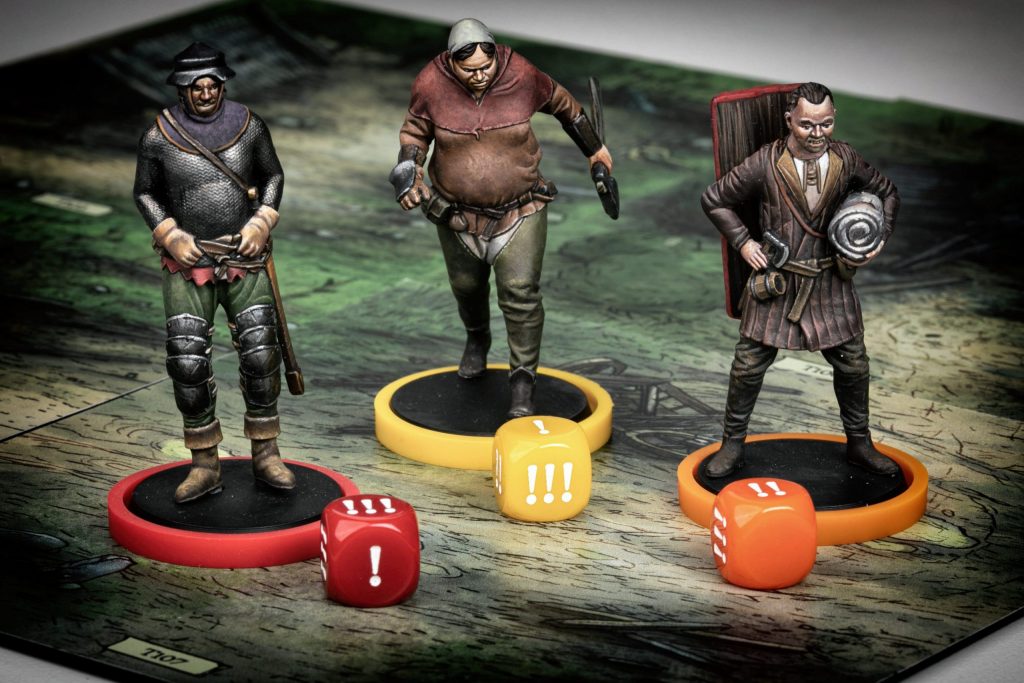 One of the things that most impressed me in my time with Kingdom Come: Deliverance the Board Game was the presentation. It is a physically and artistically well-built game, presented in a way that draws you into its setting.

The first thing I saw after opening the box was a lightly tattered piece of “parchment” describing the game’s setting. Beneath were brief biographies of the three playable characters in the preview, presented as a folded letter to the characters themselves. These were written in a style reminiscent of a monastic script, serving as an artful way to begin to immerse the player in the game world.

Beneath that were the three character sheets. They had a very sturdy build and intuitive design that places all the information you need about your character in front of you. For me, the layout conjured images of medieval medical texts. I cannot say whether that was intentional, but I can say that it was effective.

Finally, at the bottom was a final layer containing all of the pieces necessary for running the game and, my favorite part, the miniatures. These miniature figures of the player characters and NPCs were well-made and surprisingly detailed. After pulling them out of the box, my first thought was what a fun painting project they would be for any hobbyist.

I did have to wonder how many miniatures would be in the final game. There were 16 minis for this first scenario alone. Perhaps they plan to reuse some minis for later scenarios. If not, there is a good chance the box for this game will take up a lot of space on your gaming shelf.

Some Frustrations to Note

Despite these many positives, a few components did not match the build quality of the rest of the game. I felt that the worst offender was the map tiles. Relative to the other parts, they felt flimsy, and their artwork felt plain by comparison.

Another source of frustration for me was the sheer amount of pieces and parts you need to keep track of. From the map tiles to the minis, to the basic dice, to the skill dice, to the weapon dice, to the alert dice, to the alert markers, to the injury tokens, to the interaction tokens, to the perk cards, to the item cards, and beyond, without a very well organized table players might find the experience kind of fiddly. Perhaps more time with the game would lead to players finding a more fluid process than I had. Still, for my part, I felt taken out of the game more often than I would have liked as I tried to find and grab the pieces I needed at a given time.

Still, I was highly impressed with the artwork and presentation in this preview of Kingdom Come. I would be more than happy if the final product delivered more of the same.

Perhaps the most unique single feature in Kingdom Come: Deliverance the Board Game is its app. The app functions in the role of a game master at the table. It provides tone-setting background music, describes the setting to the players, voices all of the characters, reminds players what actions they can take, and tells them the results of those actions. Even in its pre-release state, the app is intuitive and easy to use.

The one drawback to my experience with the app is the quality of the voice acting. It is not bad, per se; rather, it is uneven. Many of the voices you hear most often are well performed and believable. The narrator, in particular, delivers a strong performance that contributes to the immersion of the experience.

However, the same cannot be said for those who voice many minor characters. Several of those performances were jarring enough to take me out of the experience. With how much Boardcubator has successfully done to create an engrossing experience, it is a shame that a few sub-par performances can break the illusion.

Whether this will persist into the game’s final build, I cannot say for sure. But I hope later scenarios even out the vocal performances to retain the immersion better. 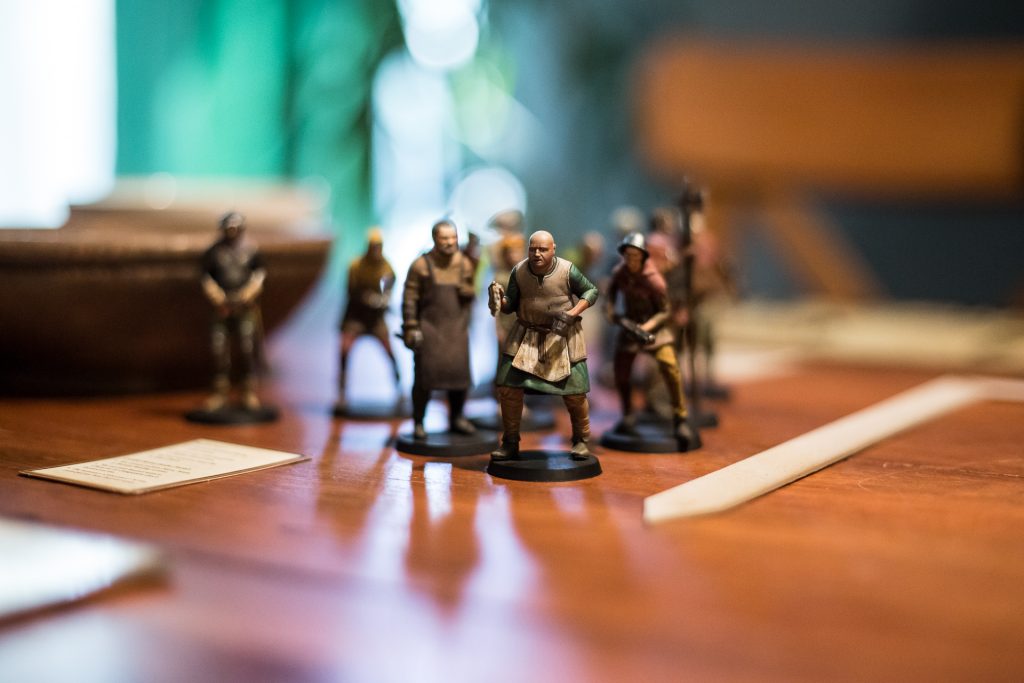 Overall, I deeply enjoyed the time I spent with Kingdom Come: Deliverance the Board Game. Given how ambitious this project is, I am genuinely impressed with how well Boardcubator seems to have achieved the goals it set for this project.

If the final product turns out to be more of what I experienced in the preview, you can bet this game will be on my table for years to come.