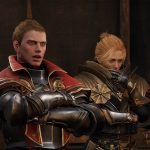 Iron Lords Podcast and LOGNET’s very own Lord Cognito is live on the PAX West show floor to give us the latest sneak peeks, developer interviews, and more. Check out our very own exclusive interview with the Creative Director for Lost Eidolons by Ocean Drive Studio.

Our Exclusive Interview for Lost Eidolons

Below is a brief description of the upcoming turn-based strategy title from the game’s Steam page:

The land of Benerio was once a shining kingdom by the sea. Then an iron-fisted conqueror, Ludivictus, set the world on fire and redrew the maps. Now Benerio is one downtrodden province in a crumbling Empire where the only true master is corruption.

Enter Eden, a charming mercenary captain forced to become a rebel commander when his village is thrust headfirst into war. Now Eden must rally his allies and stand tall against an imperial army, fearsome monsters, and enemies within.

Lost Eidolons is releasing on October 13th on Steam, and early next year for Xbox platforms. For more news regarding PAX West, please keep your eye on Lords of Gaming!