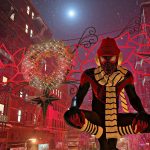 You are reading
A Few Festive Favorites

As the likes of Mariah Carey, Nat King Cole, and Andy Newman have told us time and time again, Christmas is the most wonderful time of the year. Colder nights, bright lights, and catching up with family and friends; there are many reasons to make the most of the festive period.

However, as we’re wont to do at Lords of Gaming, Christmas is a great time to sink into the latest blockbuster titles or some old favorites. Below are just some of the games we love to play over the holidays. Enjoy! 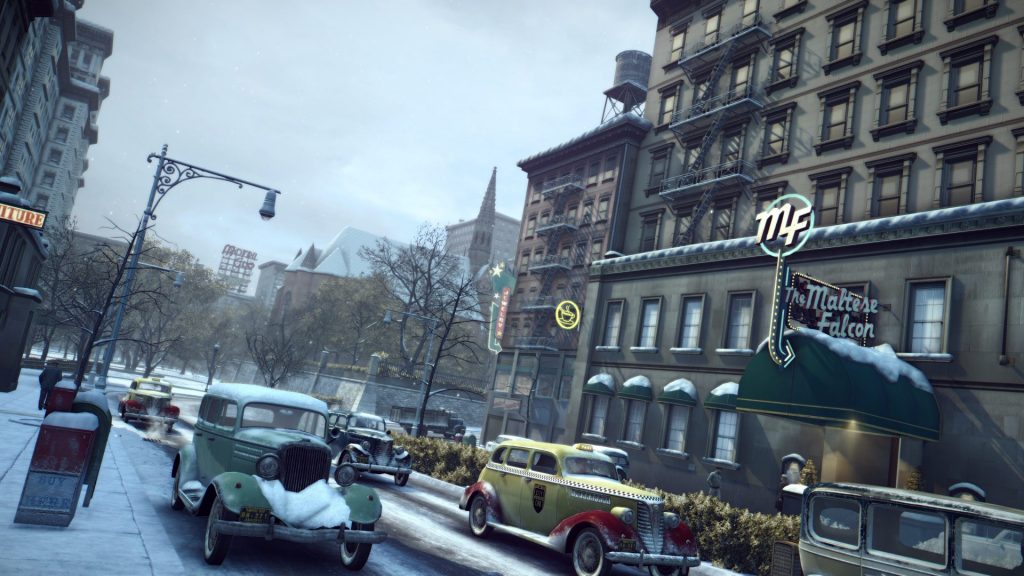 Admittedly, when one typically thinks of Christmas, mob hits and blood feuds aren’t the first things to come to mind. Yet, for many a year after its 2010 release, I couldn’t help but boot up the PS3 and go back to my home away from home; Empire Bay.

After getting a bullet from the Nazis, Vito Scaletta returns home for a month’s leave in the February of 1945. Empire Bay, 2K Czech’s fictitious spin on New York, is experiencing something of a blizzard, and boy does it feel homely.

While Vito catches up with his mom and sister over steaming soup and warm bread, NPCs stroll the promenade in thick coats and woolly hats, as soft snow crunches underfoot. Engines shudder to life in the cold and break pads squeak as they fight the ice. Snow-covered car rooves gradually clear as they slide on down the street, and the exhaust fumes match the smoke billowing out from chimneys above.

Finally, the church scene depicted in this Scorsese-style Christmas trailer never actually occurs in-game but is offhandedly referred to by characters in the latter half of the game. It’s one of many small touches, but they snowball into something quite magical. 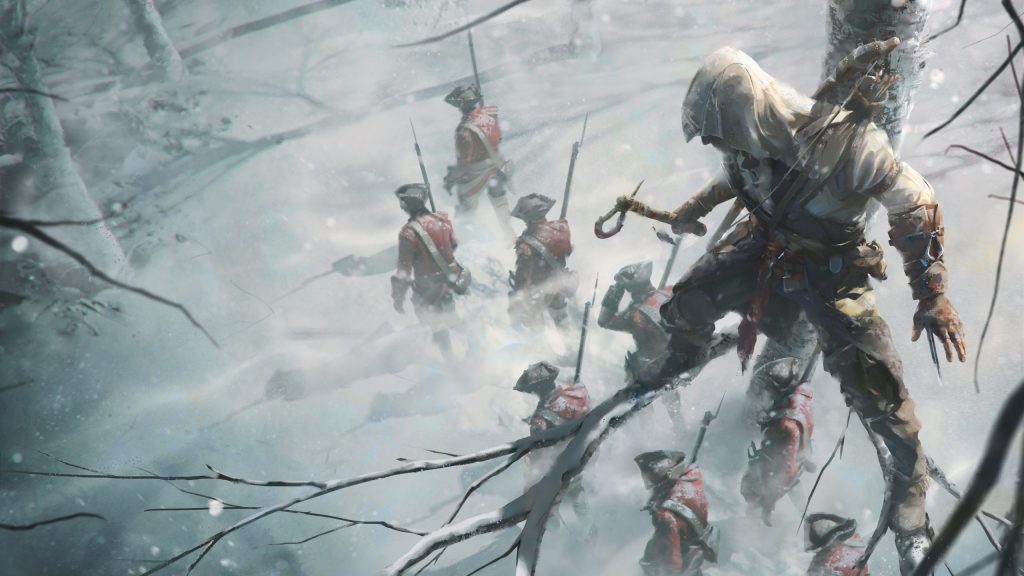 A contentious festive favorites entry in the ever-growing franchise, ACIII was a personal favorite. The gameplay overhaul from Ezio’s trilogy was a welcome one, and I found seeing some of America’s most formative years through the eyes of a Mohawk warrior fascinating.

Perhaps unsurprisingly, it was the snowy wilderness that I adored most and, more specifically, Connor’s place in it. Altair and Ezio were masters of their craft, but they were of the city. Everything about Connor’s design, from his sheer size, robes, and weapons of choice, was a testament to his native origins.

The imagery of the native hunter in the woods, picking off his prey one by one, was hammered home in Ubisoft’s traditionally epic trailers. Looking at the alpha footage, it’s apparent that the final implementation of combat and traversal fell short of Ubisoft’s lofty ambitions, but that didn’t take away from the enjoyment of feeling like the lion of the rather chilly den. 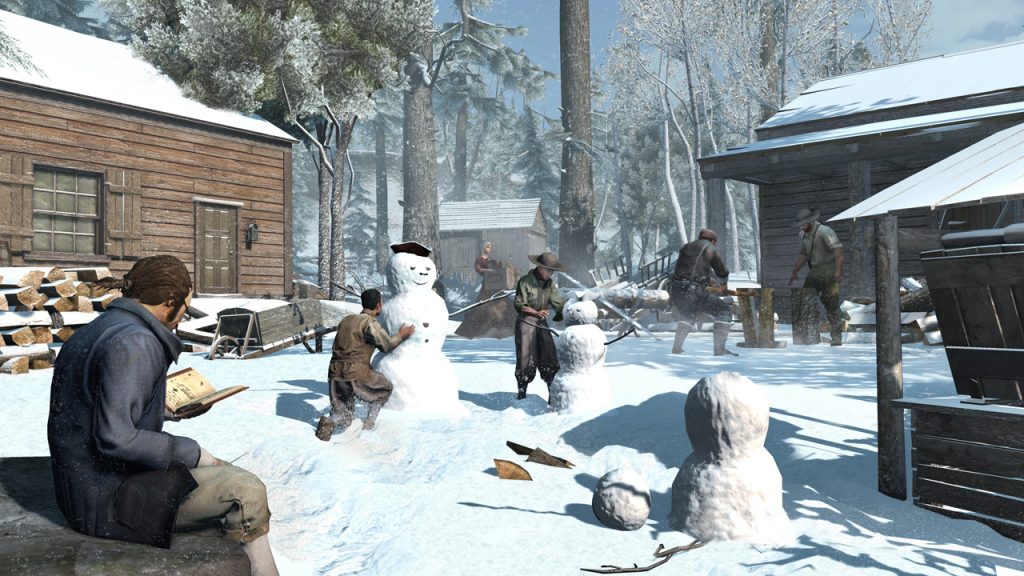 Finally, more than just the snow, the homely feel of Davenport Homestead is the largest contributor to the festive feeling. Whereas Ezio established his rather impersonal protection racket across much of Italy and Istanbul, in what is undoubtedly one of the more successful attempts at gentrification up through to the 16th century, Connor’s efforts in building up the Homestead were far more familial.

Almost entirely optional, these missions fleshed out Connor’s cheerier personality traits and fostered a community that would pull together in the hard times and celebrate as one throughout the best. What’s more festive than that?

AC III may not be for everyone but for me, it more than earned its place as a Christmas classic. 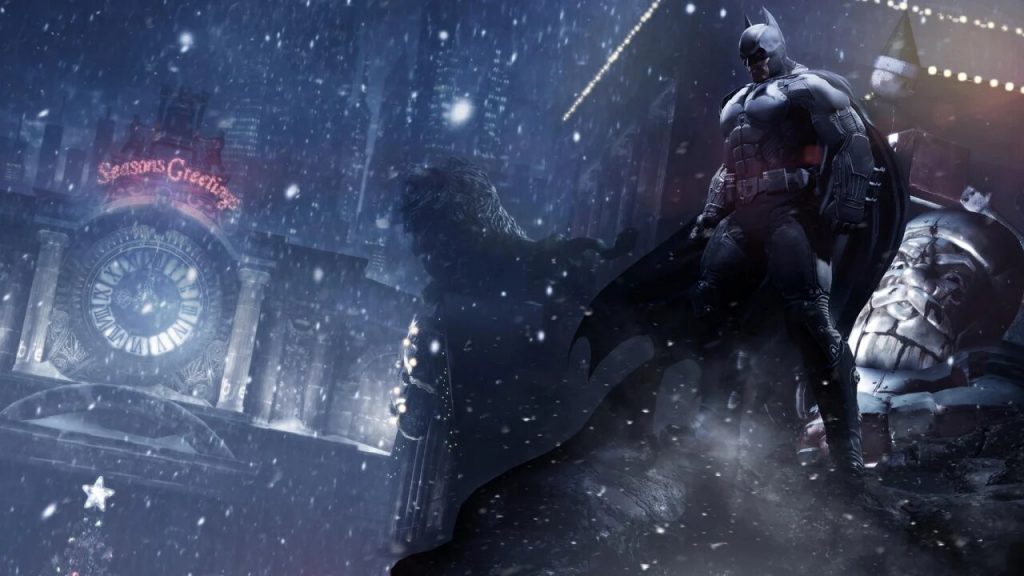 Having harped on previously about my love for all things Gotham, allow me to summarise this jolly jaunt. Set on Christmas Eve, this one really speaks for itself.

Goons in Santa hats. Christmas lights and snow, doing their best to cover up the dire economic degradation. A festive feast of a score from seasoned DC composer, Christopher Drake – whose twist on Carol of the Bells is second only to John Williams’.

Crime never sleeps in Gotham and nor does Batman. Sending goons to ER in droves, breaking arms and legs like gingerbread limbs, there’s a lot to love here if you’re a fan of DC. 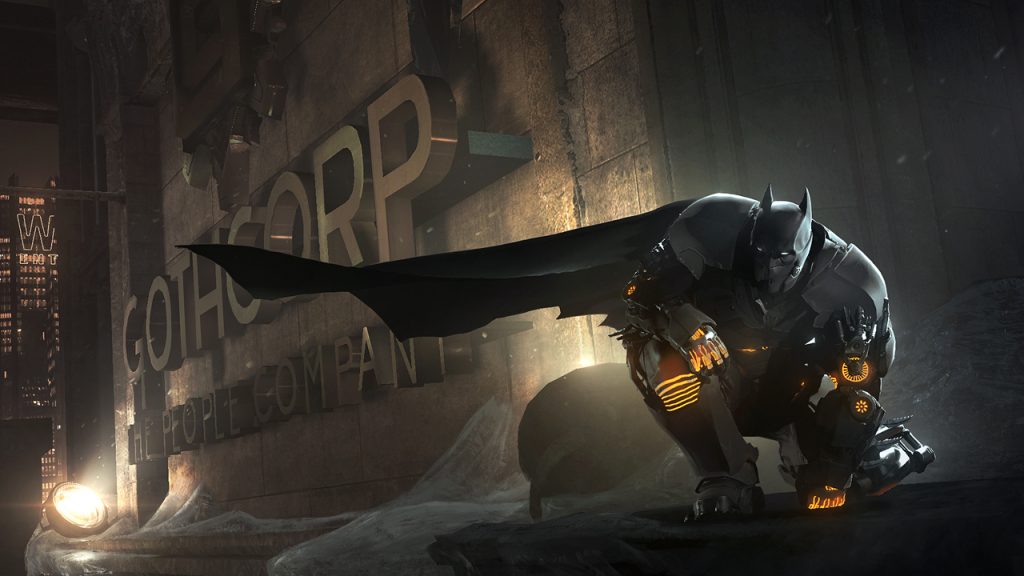 If you play the Cold Cold Heart expansion, in which Mr. Freeze decides to ruin New Year’s Eve, you can even hop in a bulbous batsuit with some innovative insulation to go clean up the stragglers from the Naughty List. Got a problem with goons complaining about the cold? Launching a superheated batarang at them tends to nip that in the bud pretty quick.

Roger Craig Smith does a wonderful job portraying a younger, angrier Batman in Origins, but I can’t wrap this up without first acknowledging that, for Gothamites around the globe, this Christmas will be that much colder after the tragic passing of Kevin Conroy.

As the iconic voice of the dark knight for over 30 years, Conroy carved his identity into the very fiber of the caped crusader, and while we will undoubtedly see many more great depictions in years to come, his tenure under the cowl will always be the definitive Batman. Small though it may be, there is solace in the fact that we’ll get one last performance from him in 2023’s Suicide Squad: Kill the Justice League.

I couldn’t round this piece off without first asking the Lords for a few of their festive favorites. Here’s their selection below! 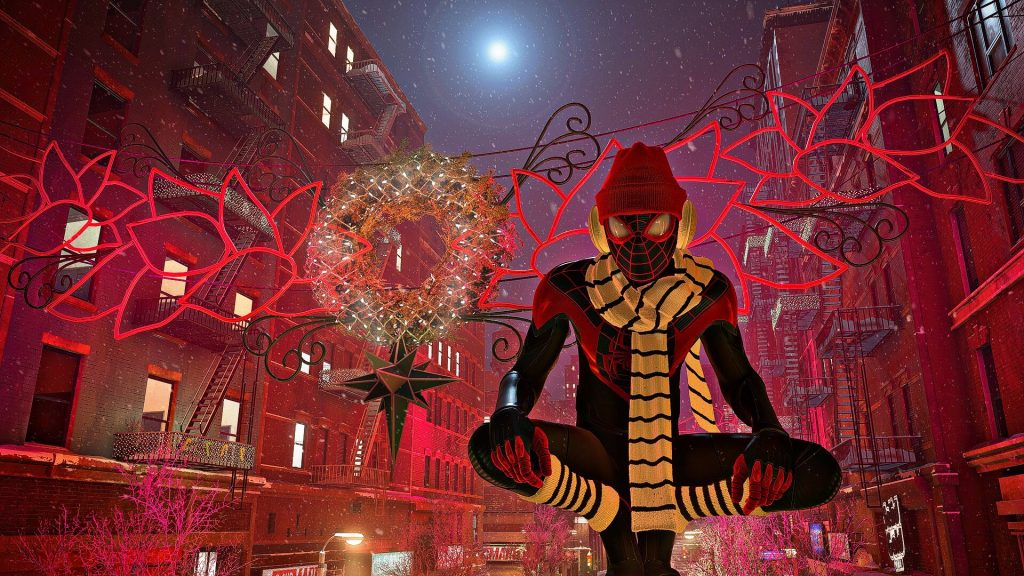 For me, Spider-Man Miles Morales is the PERFECT game to get you in the Christmas spirit. Web-swinging around a snow-covered New York is incredible, and the level of detail Insomniac has gone into to create an authentic holiday-season feel across the city is quite frankly astounding.

The customizable gear you can kit Miles out in is awesome too, with his Xmas hat and scarf the perfect combo to don while kicking some bad guy butt! 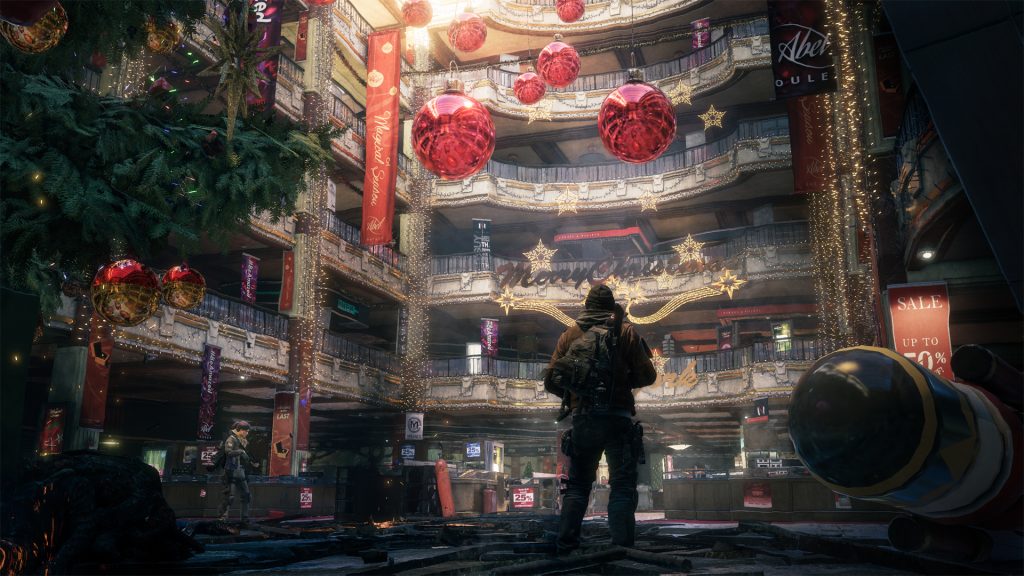 Despite coming from the Middle East and haven’t seen snow for years now, for me, The Division is the quintessential Winter/Holiday game that comes to mind. From the snow-covered post-apocalyptic Manhattan with dilapidated Christmas decorations littered across the city, The Division oozes with an atmosphere that even its more successful sequel could not replicate.

The game beautifully captures the holiday period frozen in time after the Dollar Bill virus wreaks havoc in the US. The Division should definitely be on your holiday games to-play list as it perfectly complements cold winter days. 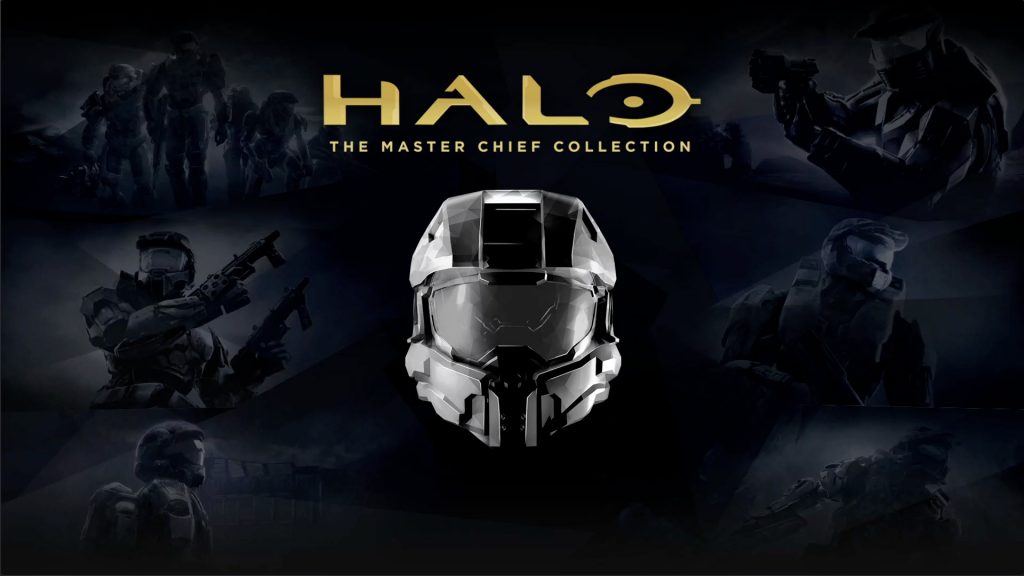 The holiday season is about togetherness. Getting together with friends and family to enjoy each other’s company like nothing had changed, if only for a little bit. I think something that multiplayer games, whether that be games like Warframe, Destiny 2, or Halo can achieve is that feeling.

Due to the fact you have the option to jump in, have a whale of a time, and make memories to cherish. While I mostly enjoy my solitude binge-watching TV shows and movies during the holidays, one of the games I always felt compelled to play during that time was Halo: The Master Chief Collection.

While I do have nostalgia for the Halo series, I always jump back into it during this season to have fun with friends. As they usually finish feasting or commuting with their families around that time. A night of endless joy would ensue as we hop into matches across the various games, maps, and modes. Even if the night ends like it always does and back to work I would go. Nights like these will always resemble similar days long gone in my life. Where I would be able to enjoy being around family or friends consistently. But the holidays now will always be special as they were back then, if only for a little bit.

We hope you’ve enjoyed this rather frosty frolic. Let us know your festive pastimes in the comments below and, from everyone at Lords of Gaming, we wish you a wonderful Christmas and a happy new year!