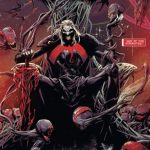 You are reading
Venom, Thanos, and the Devil’s AdvoCates

How Donny Cates Has Brought Punk Rock to the Marvel Universe

Say goodbye to the thrash metal of Jason Aaron and the polite sensibilities of Brian Michael Bendis, it is time for the punk rock era of Marvel to begin. Donny Cates unique brand of style and bombast has been infecting the dark corners of the Marvel Universe, and with every issue those dark corners get a little bit brighter. Whether you are a Marvel Zombie from way back, or a Wednesday warrior, here’s what you need to know to join the Devil’s AdvoCates (that’s what he calls his cult. They have commandments and everything.) 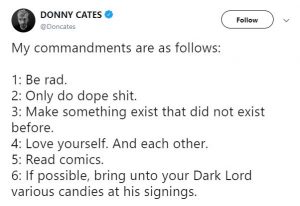 The Old Testament was about due for some updating.

Starting in early 2018, Cates made the jump from a bevy of independent works, including the ongoing vampire series Rednecks and mythlogical ballad God Country, to take over the Thanos book after the departure of Jeff Lemire (Sweet Tooth, Descender). The impact was immediate. Cates’ Thanos  was introspective, philosophical, and no nonsense. He was dangerous. He was the Thanos millions of people saw brought to life by Josh Brolin, but with a sick drumline. It was Thanos in the tradition of Starlin, Abnett and Lanning, and Hickman. He was a poetic psychopath, torn across time and space on an adventure that brought every corner of the Marvel Universe into the fold. Ideas flew fast and furious, including the best portrayal of the Silver Surfer this decade. However, it was a different character that truly heralded Donny Cates’ arrival to the Marvel Universe. 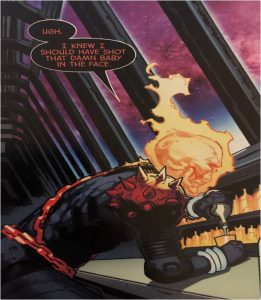 It’s a time travel thing. You had to be there.

Cosmic Ghost Rider (CGR) has taken off like few characters in the modern era, but he shares some of the best traits with them. Tragic backstory grounded in the depths of Marvel lore? Check. Killer artistic design. Check. Chip on his shoulder? Check. Irreverent personality? Check and Mate. It’s this same combination that makes Cates such a compelling writer. He does what Geoff Johns was always excellent at, taking the past and twisting it into something fresh. Though where Johns would veer into Silver Age optimism, Cates is clearly a child of the glory days of the nineties. His stories are fast, frenetic, and badass.  Its a style that feels like listening to Green Day’s Dookie album for the first time, or, more recently, blink-182’s California. It grabs you by the neck and tells you to hang on for the ride, and it’s a ride well worth going on.

Cates’ designs have been bought to life by an impressive lineup of consistent artists.   Geoff Shaw, his collaborator on God Country, Thanos, and the newly relaunched Guardians of the Galaxy has been a revelation. His  work brings an emotional punch on the same panel as Thanos is delivering a literal one. No scene is too imaginative, and his redesigns for the future versions of classic characters gives real weight to the history we have yet to see.  His other collaborative mainstay, Ryan Stegman, is the artist of Cates’ other ongoing comic series, Venom, and for all of Cates’ swagger, Stegman brings some of his own. 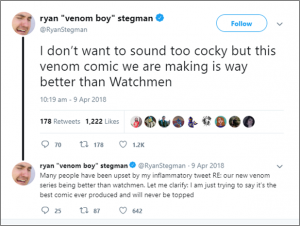 Stegman’s kinetic, exaggerated style is pushed to its limits by the insanity of Venom which has seen the introduction of the God of Symbiotes, whose origin picks up from a thread in Jason Aaron’s Thor in a symbolic passing of the mantle. By all accounts, Venom is Cates’ magnum opus of the moment. When asked on Twitter, Cates asserts that he has a long run in mind for the book, with three specials already spinning out of the main book dealing with side characters. Cates certainly seems to be exorcising some demons with this book as it focuses on the mental instability and trauma endured by his main character. The relationship between the symbiote and Eddie is equally codependent and toxic in a way that is simultaneously uncomfortable, sad, and fascinating to behold. Eddie’s struggles with drugs in the series is no doubt shaped by Cates’ own with alcohol, a topic he openly has addressed on social media. This is the Bloody Valentine part of the soundtrack. The mentally disturbed track that holds on with a rapid staccato of pulse pounding rhythms while revealing raw emotion to the audience. Cates is putting his soul on display in Venom, which despite my affinity for the Marvel cosmic characters, makes it the most interesting of his current books.

Donny Cates has been handed the keys to the Marvel cosmic universe with the ongoing Guardians of the Galaxy comic, whose debut issue launched in January. Venom is now almost a dozen issues in and is clearly ramping up to something big by reintroducing Venom’s perennial foe Carnage and Knull, the God of Symbiotes, lurking in the cosmos, don’t be surprised to see the two titles crossover in the next couple years. He is currently wrapping up a slow, introspective ballad with street level heroes in the Marvel Knights 20th Anniversary mini-series, though as of the time of this writing no follow up work has been laid out in that corner of the Marvel Universe. 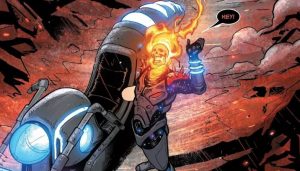 He’s talking to you. Go buy Thanos Wins. You won’t regret it

Flat out, Cates is producing the most exciting and vibrant work at Marvel. At a time when the industry is desperate for a new sound, Donny Cates is thrashing the drums. Wake up and discover the best new soundtrack to your favorite characters.