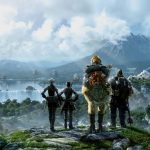 At the Final Fantasy XIV Fan Gathering in London, Producer/Director Naoki Yoshida made an appearance to discuss the state of the game. In a series of tweets, Twitter account @FFUKFans mentioned Square Enix is “hard at work on FFXIV on PS5!”

Yoshida has been in London to discuss the future of FFXIV. The Dev’s are hard at work on FFXIV on PS5! #FFXIV #FFXIVFanGathering

However, this piece of information should be taken with a grain of salt since direct quotes were not provided. Square Enix has yet to confirm whether Final Fantasy XIV would appear on PlayStation 5. Fortunately, we probably won’t have to wait long for information since Sony says the PS5 is coming in 2020.

Back in October, we published an article speculating which games should carry over to the next generation, and Final Fantasy XIV was on that list. The MMO has a growing subscription base of fourteen million and growing. Its latest expansion, Shadowbringers, released this year to critical and fan acclaim. Patch 5.1 of FFXIV released at the end of October and includes a NieR: Automata-inspired Alliance Raid among many other additions.

The Lord’s Word: As a hardcore FFXIV advocate, I couldn’t be any more excited to bring my progress in the game to PS5. Truth be told, I fully intended to keep playing even if it didn’t make the jump to the new consoles. Hopefully, players on Xbox can join in on the fun too. The more people that get to play FFXIV, the better.