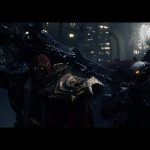 You are reading
Darksider Genesis Review: A Tale of War and Strife

The Darksiders franchise began back in 2010 on Xbox 360, PlayStation 3 and PC. Since then there have been two more mainline games with Darksiders II in 2012 and then Darksiders III in 2018. Darksiders Genesis represents the first spin-off game within the franchise. Taking inspiration more from a Diablo-style of gameplay, versus the typical third-person hack and slash gameplay that the series has become known for. The question remains, was this spin-off a great use of the IP? How does it stack up against other games in the genre? Let’s dive into Darksiders Genesis from Airship Syndicate on Xbox One. 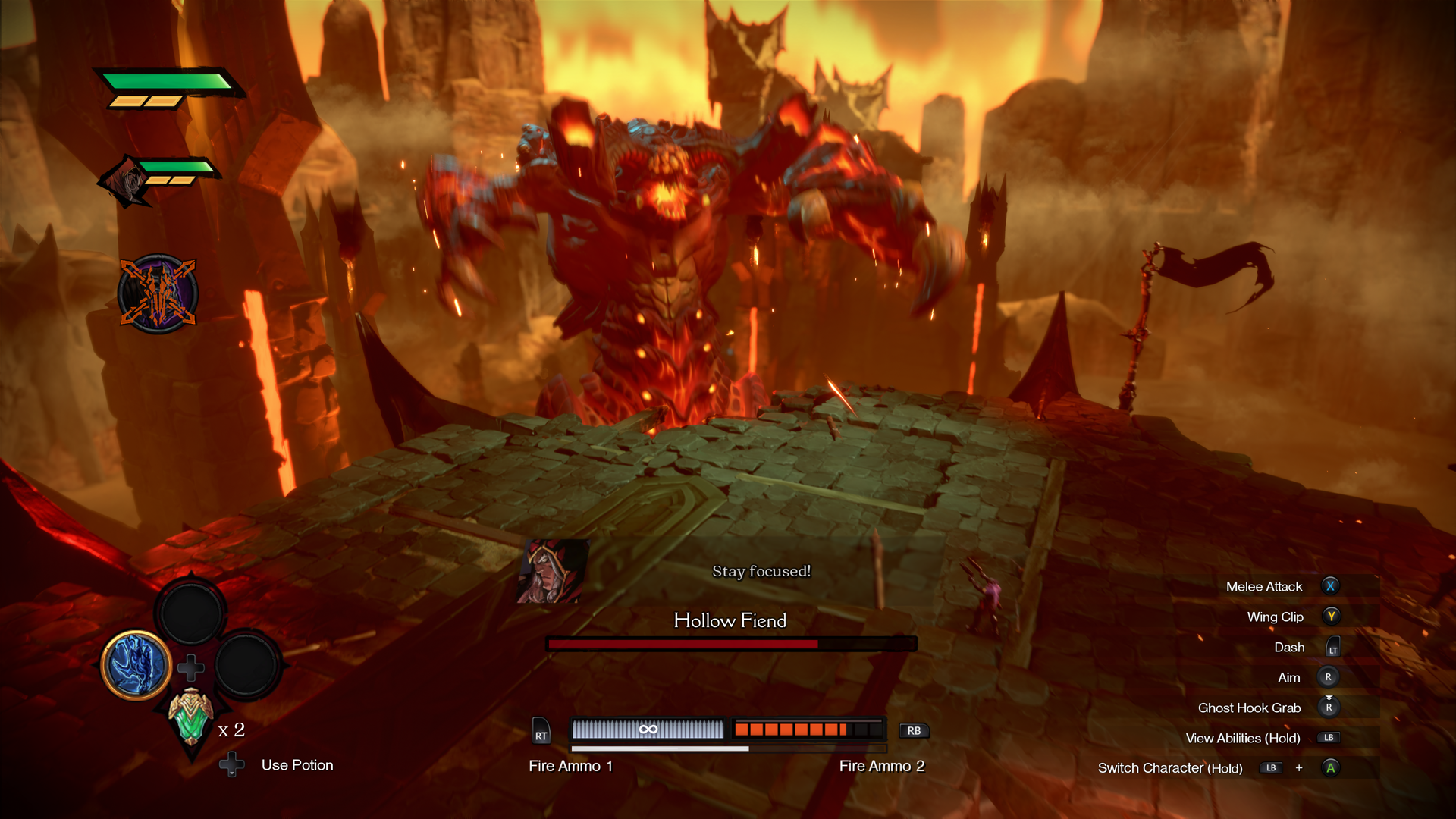 One of the first things that caught my attention was how smooth it was switching between War and Strife. With each character being focused on excelling at a different aspect of combat. Strife’s dual-wielding guns were great for blasting away at enemies from a distance. While with War, his kit was focused at being knee-deep in the enemy releasing devasting combos with his Sword. Quickly switching between them can turn a difficult encounter into a bloody massacre.

Somehow the brutality of the combat translates beautifully to this perspective. This is most evident during the executions you can perform on enemies. When you beat on an enemy for long enough their health will eventually lower to a certain threshold. When they hit that threshold you can perform an execution that temporarily makes you immune to damage from surrounding enemies. Chaining these executions together not only is flashy and satisfying. They can also help you get out of trouble when you are being swarmed by enemies. 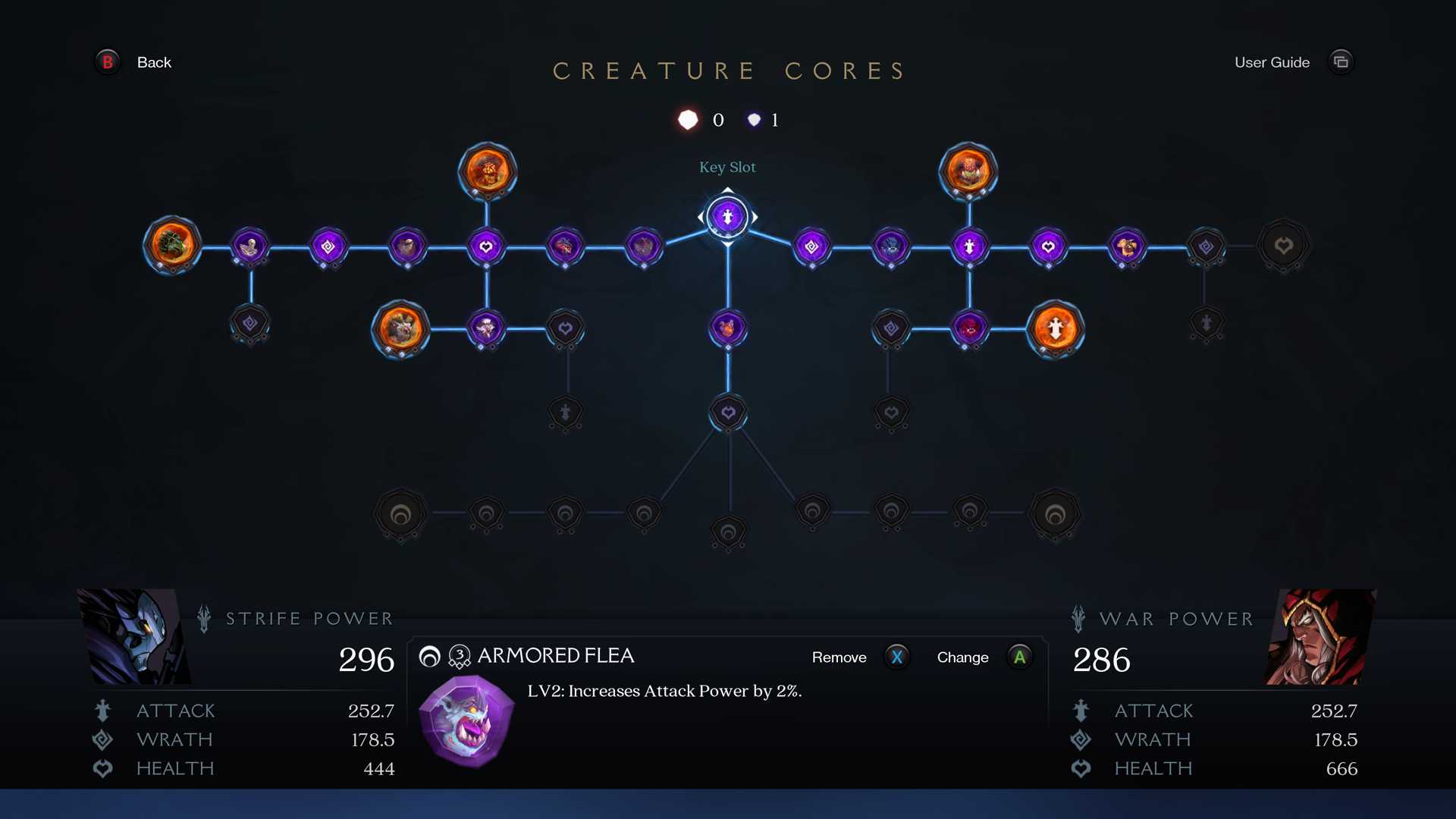 In games like Diablo, there is a major focus on killing mobs and bosses in order to grind for better loot. While Darksiders Genesis does not have lootable weapons, the upgrade system is based around “Creature Cores”. As you defeat the wide variety of enemies that you find within Hell, you will gather cores in relation to that monster. The more you collect the more powerful that core will become. Major cores are often looted from bosses and can have massive perks at the max level. I found myself backtracking and grinding on some bosses to specifically max out some of the best cores. While grinding definitely was encouraged, it was not time-consuming like many games in the genre. You could also play the entire game without going back and grinding too much, keeping the option open to players was a great aspect to this model.

The Price of Your Soul

You could unlock devastating power moves through using the game’s main currency which is souls. Souls are earned by killing enemies, solving puzzles, opening chests and completing quests. However, for some of the best upgrades and items in the shop, you need a currency called Boatman Coins. These coins act almost as a collectible as they are often hidden throughout each chapter of the game. Often, you cannot access some of them when you first play through a level because of a lack of certain abilities or perks. I found myself backtracking frequently to collect more of the coins to unlock more upgrades.

This led to me having more creature cores and becoming more powerful by default. The game felt balanced in terms of delivering to players who just want to play each chapter one after the other. While at the same time catering to players who like to 100% complete every chapter, skills, and abilities.

One of my constant frustrations with Darksiders Genesis was the platforming sections scattered throughout the game. Typically, I am ok with platforming in most games where it makes sense. It wasn’t the fact that platforming didn’t fit with the game. However, what it did do was show the cracks in the controls of the game. The controls through combat felt smooth and easy to master. The platforming felt janky, and with some dungeons requiring you to pull off a fair amount of platforming. This quickly became my least favorite part of Darksider’s Genesis. If you are going to put platforming into your game. Make sure that it feels good and serviceable compared to the rest of the game. It felt more detrimental to the game then helpful. 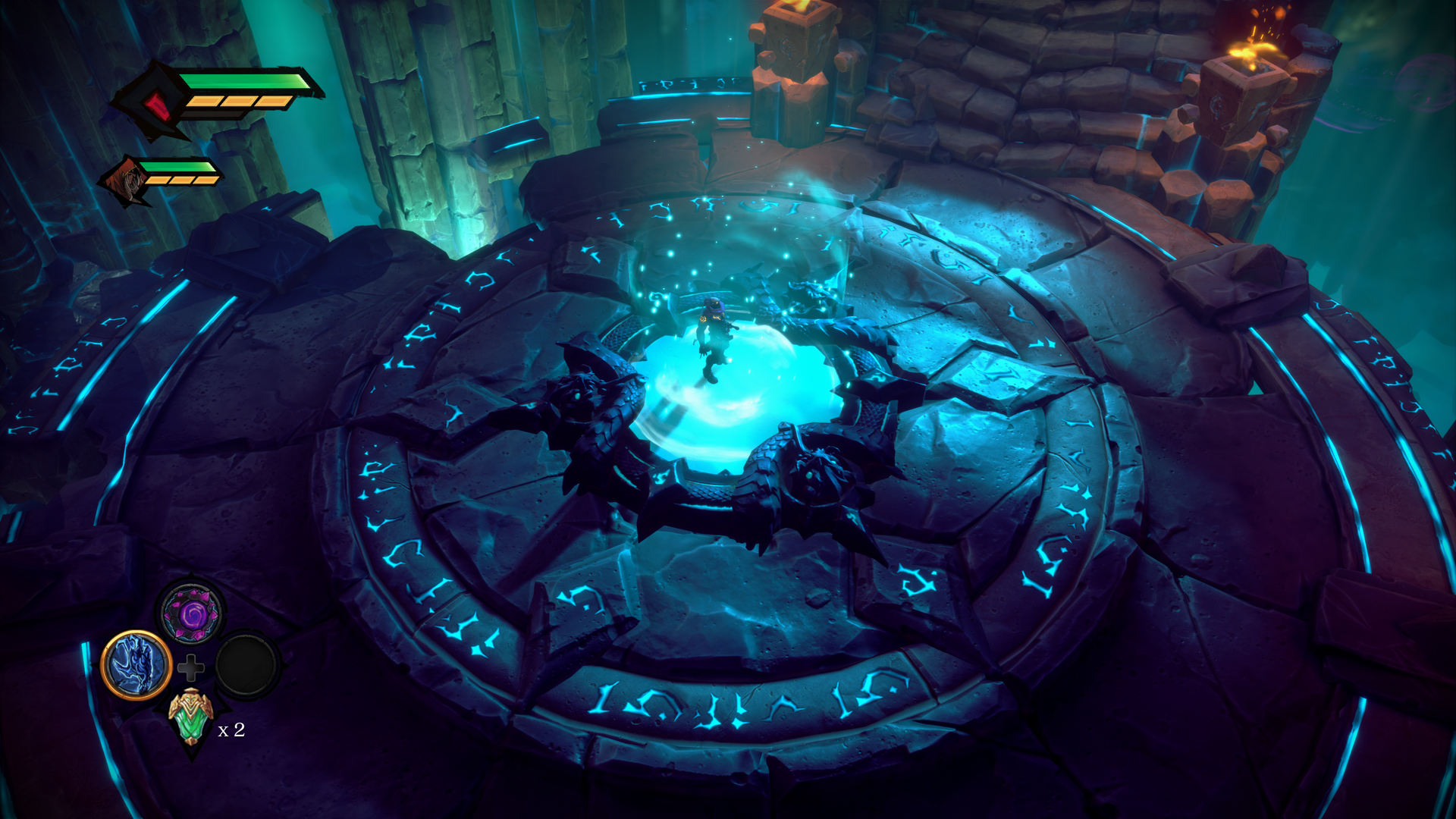 The gothic art style of Darksiders Genesis is beautiful, filled with dark colors and hues. I really fell in love with the level design and art direction of the game. War and Strife were brilliantly designed, as each movement with them in combat felt like art in motion. While traversing hell, the most impressive aspect was the varied level design. It wasn’t all just lava and brimstone. There were gorgeous ice-themed levels, as well as a wide variety of worlds to explore across the 16 chapters. My absolute favorite level in terms of design was chapter 7 Decay. It had you exploring a swampy and dreary landscape filled with bog monsters and skeletons. It had some pretty clever puzzles mixed in with it. Overall I walked away very impressed with the overall vision for the game.

The game’s performance was good, except when it wasn’t. Often in these Diablo-style games, choppy framerate is a consistent issue. However, in Darksiders Genesis, the game ran great in terms of framerate and load times. There was one major issue I constantly ran into, and that was clipping into walls. Sometimes in combat, I would find myself jumping away from an enemy and then become clipped into a wall. With no means to escape, I would have to exit the chapter and start over again. While this only happened twice, it was very frustrating having to backtrack 30 to 40 minutes through a chapter because of a clipping glitch. 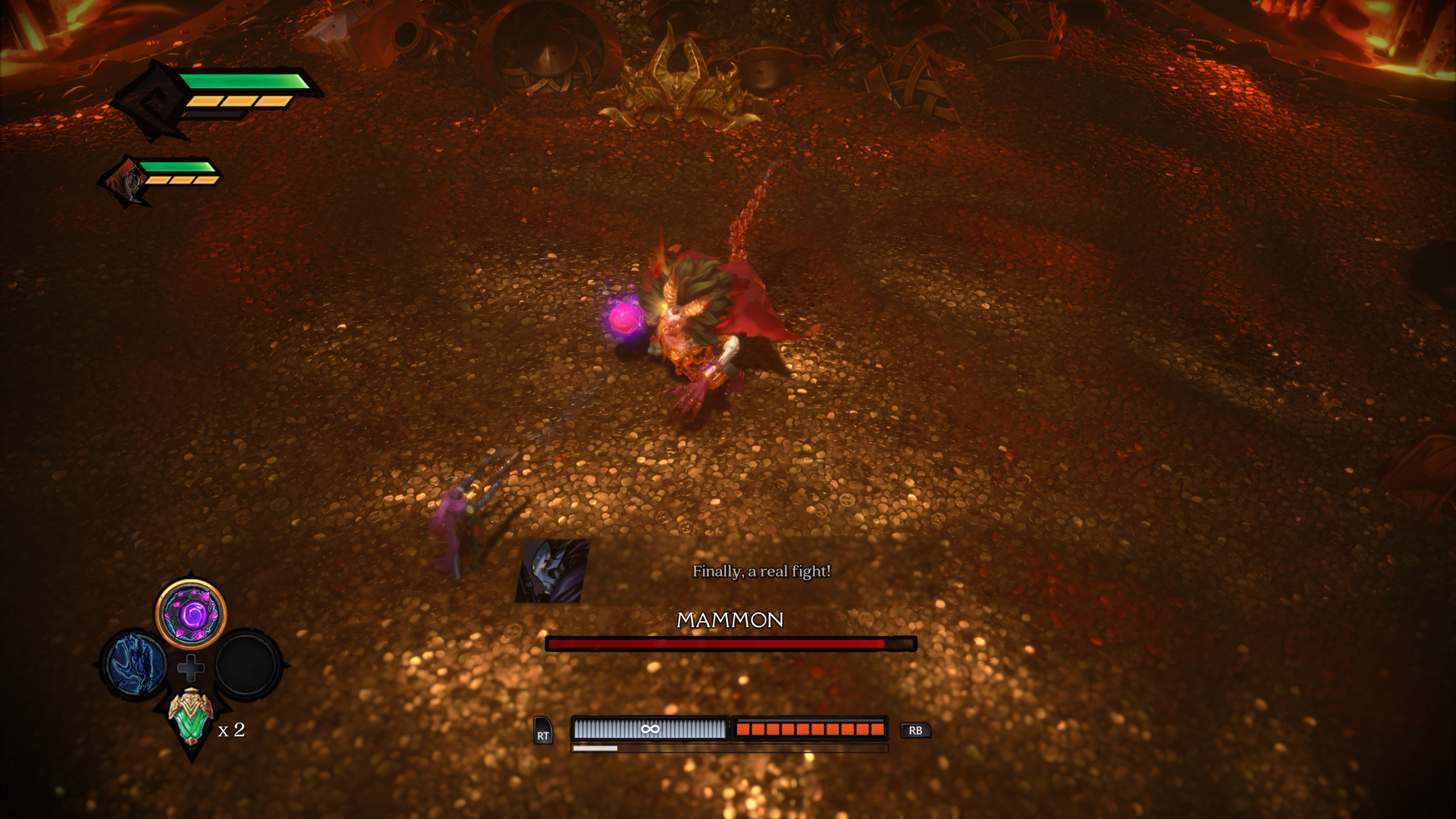 Darksiders Genesis is a prequel to the original Darksiders game. This means you spend much of the game going “AHHHH I know you!” if you have played the prior games. The storyline is a pretty basic RPG romp, Lucifer is trying to overturn the balance of the world. He plans to do this by striking deals with a variety of nasty demon lords who are craving power. These demon lords quickly become your targets as you try to catch up to Lucifer. The campaign spans 16 chapters, while the story really falls to the backseat, unfortunately. It becomes a constant, dialogue, start a chapter, finish a chapter, dialogue. It really felt like a missed opportunity you provide a really dynamic story with all the interesting characters found within the game.

The soundtrack for Darksiders Genesis continues the franchise’s standard for an absolutely heavy hitting music. Heavy orchestral strings and instrumentation are the backdrops as you butcher your way through endless waves of demons and mobs. I am a nerd for a well-orchestrated soundtrack, the menu music alone had me sitting at the main menu just listening for a few minutes.

Both the voice actors for War and Strife deliver great voice acting performances. As Strife who constantly teases and jokes with War throughout the game, always has a mischievous tone to his voice. While War sounds like what you imagine a 15th century Knight who had seen thousands of battles would sound like. The demon Samael delivers fantastic performance with a voice that could cut rock with its deepness. All of these performances come together to sell the overall gothic and hell vibe of the game almost perfectly.

While Darksider Genesis may be lacking in some areas, it makes up for it in others. If you are looking for a game to satisfy that Diablo-style gameplay itch while you wait for Diablo 4. Then Darksiders Genesis will be a good pick-up, as it provides a different experience but overall still feels familiar.