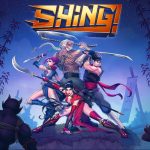 The Lords of Gaming are live at the PAX East 2020 show floor. The LOGNET crew got a chance to interview the developers from Mass Creation to discuss their upcoming four-player co-op and free-flowing sword combat title, Shing!

The game is all about slashing demons to pieces with your buddies. Shing! tries to recapture the spirit of old school beat em up games. The game focuses on delivering fun instantly with your friends. Shing! features a unique art style and unconventional control scheme.

In Shing!, attacks are controlled via the right analog stick, a unique feature in beat’em up genre. The free-flowing combo system allows combos to be chained up seamlessly with your friends. The game also features drop-in and drop-out co-op mode and the game scales difficulty accordingly. The game also features an interesting parrying and blocking system in the game. Be sure to check out the full interview and game preview below.

The game is slated to release in Q2 2020 across all platforms. Are you interested in Shing!? Let us know in the comments and don’t forget to check back for the latest gaming news and information.