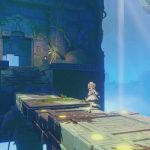 In Genshin Impact‘s final beta, players get to delve into the game’s online co-op mode. Genshin Impact will launch sometime during Q3 of 2020 and will be available on PlayStation 4, PC, and mobile platforms. The beta will be cross-platform, so up to four players can team up for multiplayer hunts and dungeons regardless of which platform they play on. With this new game mode addition, we’ll finally get a chance to experiment with the game’s combat mechanics in a team environment.

This will be the first time PlayStation owners will get a chance to experience Genshin Impact before release.

See More: Bravely Default II’s Demo Is Great, But Has A Few Issues

The announcement comes a few months after the game’s March beta for PC and mobile users. We participated in the beta and came away from the experience with very positive impressions. Regarding player feedback, Producer Hugh Tsai said the team has been listening and will be implementing some changes and optimizations in the Genshin Impact’s final closed beta before launch.

Stay tuned to LordsofGaming.net for impressions on the game’s online component. For more information, visit their official website.