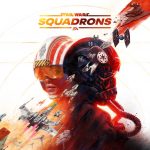 There may be no IP that is more regarded in terms of film and video games than Star Wars. With a massive back catalog of games from Star Wars Battlefront, KOTOR, Dark Forces, and many more. With a couple of missed opportunities and a handful of canceled games. There is no doubt a lot of pressure on EA to deliver great Star Wars experiences for their fans. Star Wars Jedi: Fallen Order was a good step in the right direction. With more games on coming many fans are anxious to see what could be next. Star Wars Squadrons looks to be the next game.
After a leak on the Xbox store earlier today, we got official news on an upcoming Star Wars game. Star Wars Squadron is the new upcoming game from EA. Originally known as “Project Maverick” in a leak from the PlayStation store a few months ago. The game looks to be a built around space combat exclusively, similar to the classic Star Wars: Tie Fighter game. EA will officially be revealing the game this Monday, June 15th at 11 am EST. We anxiously await the next installment in the Star Wars universe. Fingers crossed that the development team at EA Motive absolutely nail the reveal.

Pilots Wanted. Tune in for the reveal trailer of #StarWarsSquadrons this Monday, June 15th at 8:00 AM Pacific Time: https://t.co/ULwkIhQy2y pic.twitter.com/L0Z3jC2c3j

Are you interested in Star Wars Squadron? Let us know in the comments and don’t forget to check back for the latest gaming news and information.