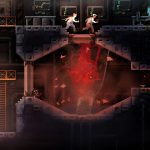 You are reading
Carrion Review – It’s Good to be Evil

Carrion is a title that will stick around in my head for a while. Not only is it a self-styled Metroidvania, one of my favorite sub-genres, but it attacks the tropes with an interesting twist. However, there are some aspects that hold it back. Is the game worth your time and money? Find out in our full review below.

Carrion’s interesting twist comes in its basic premise. The game is self-described as a reverse horror game. Players control a mysterious, amorphous creature that escapes captivity in a heavily guarded research facility with a single goal in mind. That goal is to stalk and consume those who imprisoned it in the most gruesome ways possible. As you progress, you can actually get a sense that your actions are indeed spreading fear throughout the vast facility.

Although Carrion’s story is simple and light, it does a good job of setting up the game’s overall vibe. The creepy 80’s horror movie theme never relents throughout the game. There is some light environmental storytelling going on as well. For instance, you’ll notice screens directing personnel to fallback to certain areas of the facility as you progress.

Flashback sections are few and a far apart and superficially portray the human side of the story. Every flashback sequence pits you as a different human character. Sometimes you assume the role of a lab-coated scientist, other times a soldier. These flashbacks don’t really add much to the game’s overall story or lore. They feel artificially imposed. They’re there just to break up the general game loop. But I might say, the game has one of the most satisfying endings in recent memory.

Metroidvania to the Core

Like all Metroidvania titles, Carrion follows that tried and true formula that has been used for decades. Initially, your character is weak and vulnerable. Slowly, you acquire more health, skills and energy needed to progress to previously inaccessible areas.

What’s great about Carrion’s amorphous creature is that these upgrades are justified quite nicely. In other words, you upgrade by breaking containment units and absorbing their content to get stronger. It’s brilliantly conceived and only adds to the previously mentioned 80’s horror movie vibe.

Some of these upgrades include skills such as spikes, cloaking, and changing physical form when in water. Personally, my favorite skill was the mind control skill. This allowed the creature to fully control humans via one of its revolting tentacles. The mind control skill is useful when you need to access levers to open different doors in certain areas. The skill is also a great way to attack unsuspecting soldiers with little risk to the Carrion. 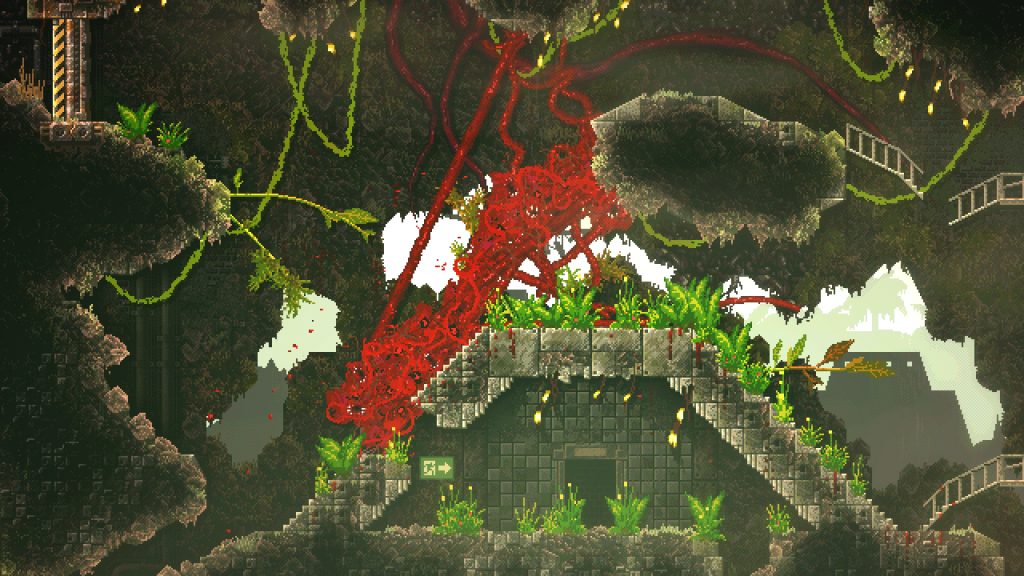 Carrion consists of a hub world known as the Frontier that connects different areas within it. These areas are somewhat diverse andinclude locations such as uranium mines, waste landfills, and botanical gardens.

Players traverse the Frontier hub world to different areas and must breach them. You breach these different areas by spreading your biomass in order to clear the area of enemies and revert back to the hub world. These biomass locations also act as save points to heal the creature. Some areas consist of three biomass locations, while others have up to six biomass points, which is a rather nice quality of life bit.

As you are breaching any particular area, you’ll quickly notice you need a certain skill in order to progress, like any traditional Metroidvania game. Each area has containment units that provide upgrades and skills for the Carrion. Naturally, these skills and upgrades will allow you to continue breaching the same area you’re currently in or a different area that had a roadblock to clear.

Ultimately, the amorphous creature wants to spread its biomass all over the facility so it can then proceed to escape. It’s like its own version of scorched earth policy, but with mutilation and horrific violence. However, during my playthrough, I often felt lost and didn’t know where to travel after breaching an area. It was infuriating because the game doesn’t provide any map of any kind. This forced me to wander aimlessly many times until I accidentally reached the next area I was supposed to go.

I played the PC version of the game via Xbox Game Pass. Initially, I tried it out with a controller just to test it out. Feeling that the controller setup wasn’t tight enough to my liking, I played the majority of Carrion with keyboard and mouse. It completely changed the experience for me and made traveling and attack far more intuitive and accurate.

You aim with the left mouse button to move and right-click sends out your tentacles to grab and manipulate objects or humans. While the Q, E, Tab, and Shift keys are used for your abilities. This may sound unappealing to controller enthusiasts but the keyboard and mouse felt more natural during my playthrough. Even in the game’s most chaotic moments, I rarely felt out of control. 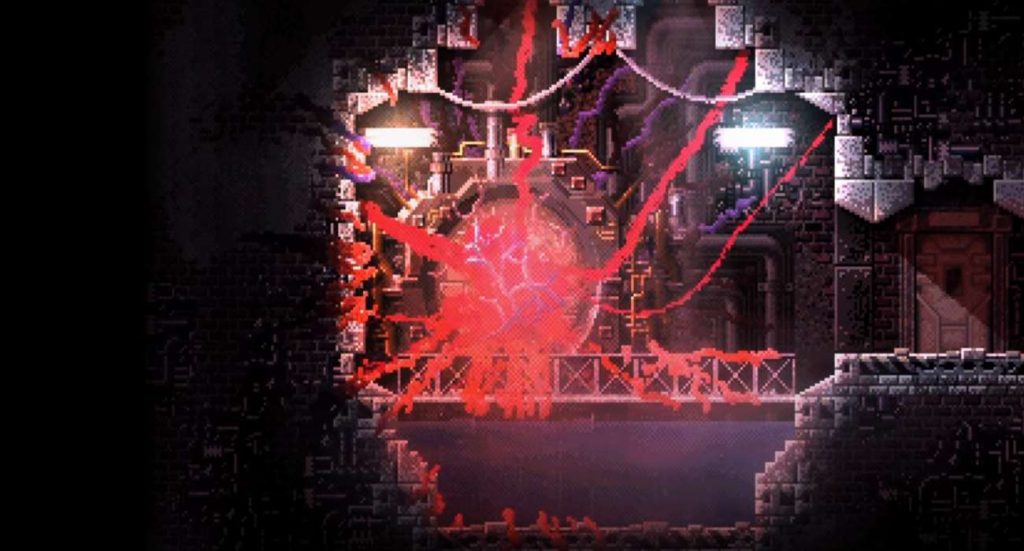 Carrion sports a retro pixelated look. The creature itself is all red orbs of ooze and tentacles. The human characters reminded me a lot of the art style from characters from the 1989 version of Prince of Persia (yes I’m old), yet more pixelated.

The art style invoked the 1980s horror movie tie in aesthetic well. Despite its heavily pixelated nature, I never felt like the style detracted from the gameplay.  However, I had only one big gripe in the game’s graphics. Since the game is set in a research facility, the environment design becomes indistinguishable and too many areas look samey. This is a substantial problem since the game doesn’t include a map and there’s backtracking involved like any Metroidvania title.

Carrion was a solid experience from the get-go. The game puts you in a horror fantasy and lets you unleash hell in the game. The game cleverly rationalizes Metroidvania style upgrades within the game’s amorphous creature. The abilities are fun to use and diverse enough that every encounter feels fresh.

Conversely, the game really suffers from a lack of a map. I cannot express enough how irritating it was to wander the game’s hub world not knowing where to go next. As an adult with a family and responsibilities, gaming time is limited and it felt like the game wasn’t respecting my time during these wandering moments. This, along with bland environments detracted from the required backtracking portion.

Overall, I completed the game in about 5 or 6 hours. Despite its flaws, it was a solid experience that any horror or Metroidvania fan shouldn’t pass up.

7.5
Fun to Live Out Your Monster Fantasy