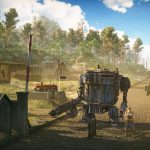 If you are a fan of RTS games, it likely you have had heard of the upcoming game Iron Harvest. Set in an alternative universe of 1920+ just after the events of World War I. A world where “dieselpunk” mechs destroy the battlefield. A war rages on between the three factions of Polania Republic, Rusviet, and finally the Saxony Empire. In a new trailer, we got an in-depth look at the Saxony Empire.

Today, in a new trailer released on the official Deep Silver YouTube channel. The trailer gives us an in-depth look at some of the history and motivations of this mighty empire. With a focus on massive artillery and “shock and awe”. The Saxony Empire is a force to be reckoned with on the battlefield. Iron Harvest is coming to PC on September 1st via Steam and GOG. The open beta is currently available to play via Steam for free. You can find the open beta here.

Are you excited for Iron Harvest? Let us know in the comments and don’t forget to check back for the latest gaming news and information.

You can check out our preview for the game here. We will also be doing a handful of guides in the future to better prepare you for the battle ahead in Iron Harvest.