You are reading
BugSnax: The Review

In the early months following the PlayStation 4’s launch, there was not an abundance of titles like we have now with the PlayStation 5. Back then, Sony was sifting through indie developers to find the right fit for marketable first-year titles and PlayStation Plus games. One of the games to come out of that was Octodad: Dadliest Catch, a goofy, funny game where you play as part dad and part octopus. In a move that seems like a culmination, the small team at Young Horses is back again. This time with BugSnax. A launch PS5 game and the very first PS5 PlayStation Plus game.

Much like its predecessor, BugSnax is a funny, goofy, narrative-driven, adventure game. You play as a journalist who has set off to Snacktooth Island in search of a story that may or may not exist. You begin by looking for Elizabert Megafig, the explorer who discovered Snacktooth Island. When you arrive, you find that Elizabert has gone missing. More strangely, the wildlife on the island is made up of different types of snacks. There are almost 100 different types of BugSnax each with its own day and night cycle as well as its own likes, dislikes, and habits.

The BugSnax are hilarious, each one feels unique and is equally funny. There are BugSnax like Sandopeade, which is a sub sandwich with pepperoncini and red onion legs. Then there are BugSnax like Shishkabug, a spider made up of grilled vegetables on skewers. Dr. Sodie is a spider-like dark red can with straws for legs and the Bunger is an aggressive rhinoceros beetle that is a hamburger with curly fry legs.  There is a theme to each area and the team does a great job of building an environment by putting BugSnax where you would imagine they would live. There is a bowl of stew that lives in a frozen cave, the hamburgers become BBQ hamburgers in the canyon area. It is the kind of clever detail that is easily missed but adds to the theming in a likeable way.

A Story With A Pretzel Twist 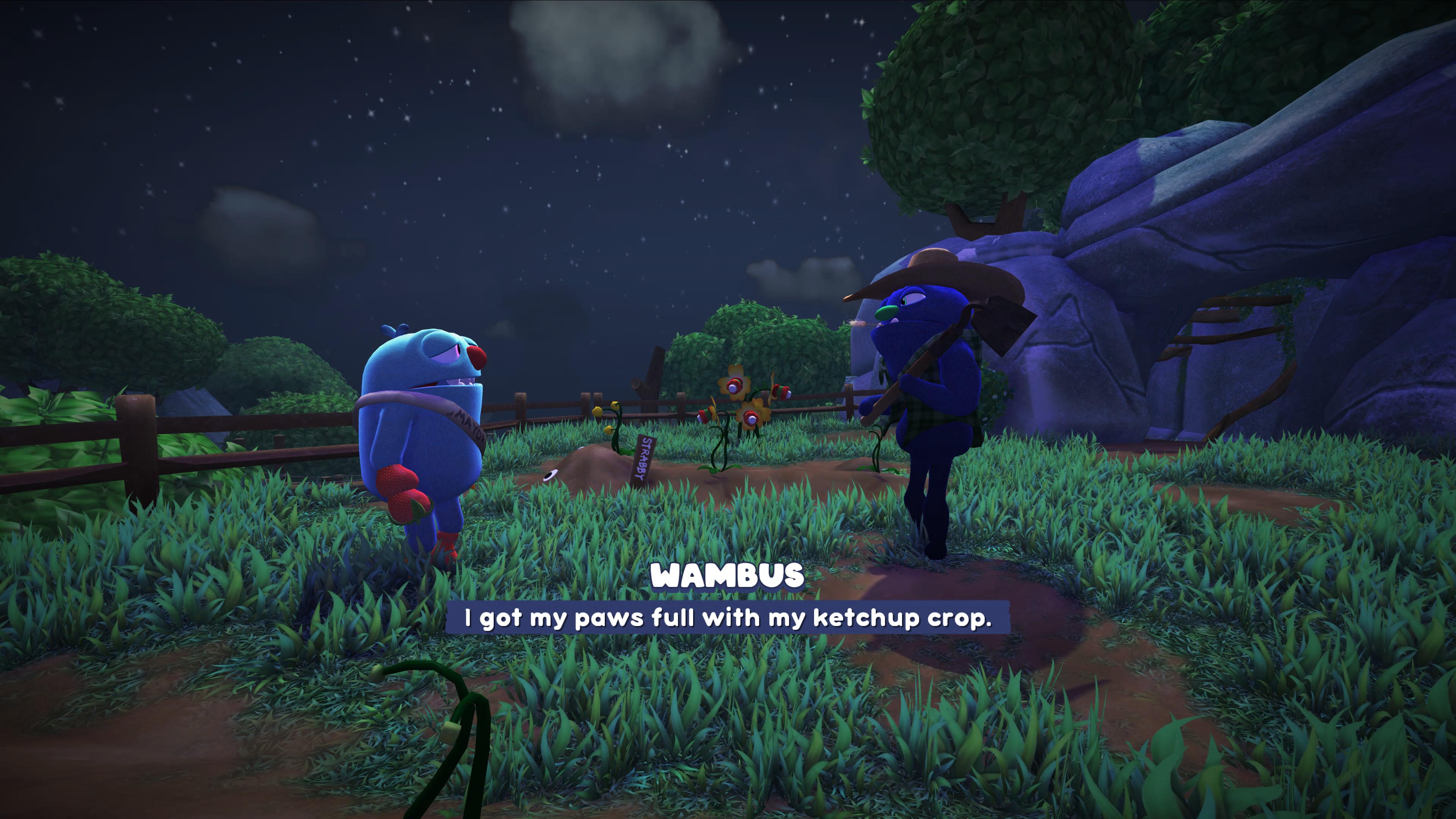 The main course found in BugSnax is its story. You will encounter 12 different characters in BugSnax, each with their own backstory and motivations. The people you encounter on Snacktooth Island are called Grumpuses. Your goal is to interview each one and find out exactly what happened. Although getting information out of them has its own tribulations. You first meet Filbo who has now been assigned as the town’s Mayor with Elizabert gone. Filbo sends you on a mission to get everyone back to Snaxburg, their makeshift town so they may work together to discover what happened.

You progress in the main story as you convince the Grumpuses to come back into town. Each Grumpus gives you a set of side quests before they will interview with you or reconcile their differences within the town. There are roughly 80 main quests and 40 to 50 side quests total. Completing the game should take 10 to 12 hours while a full completion should take closer to 15 hours. These quests are short and repetitive, but they provide a meaningful background to the overall story.  They give each one of the Grumpuses a deeper backstory and let you know their motivations as well as where they last saw Elizabert. I found myself becoming captivated as if there was about to be a twist in the story. Spoilers aside, it never delivers at the level that I was expecting.

BugSnax has a well rounded out cast of voice actors that do a phenomenal job of bringing these hilarious characters to life. The cast includes voice actors like Fred Tatasciore, who has a 20-year history including Family Guy and Halo. Yuri Lowenthal, who plays Spider-Man in Marvel’s Spider-Man. Debra Wilson from Start Wars: Jedi Fallen Order and Mad TV. As well as Roger Craig Smith, who plays Batman in the animated movies and Sonic in video games. The pedigree is vast, and it shows. 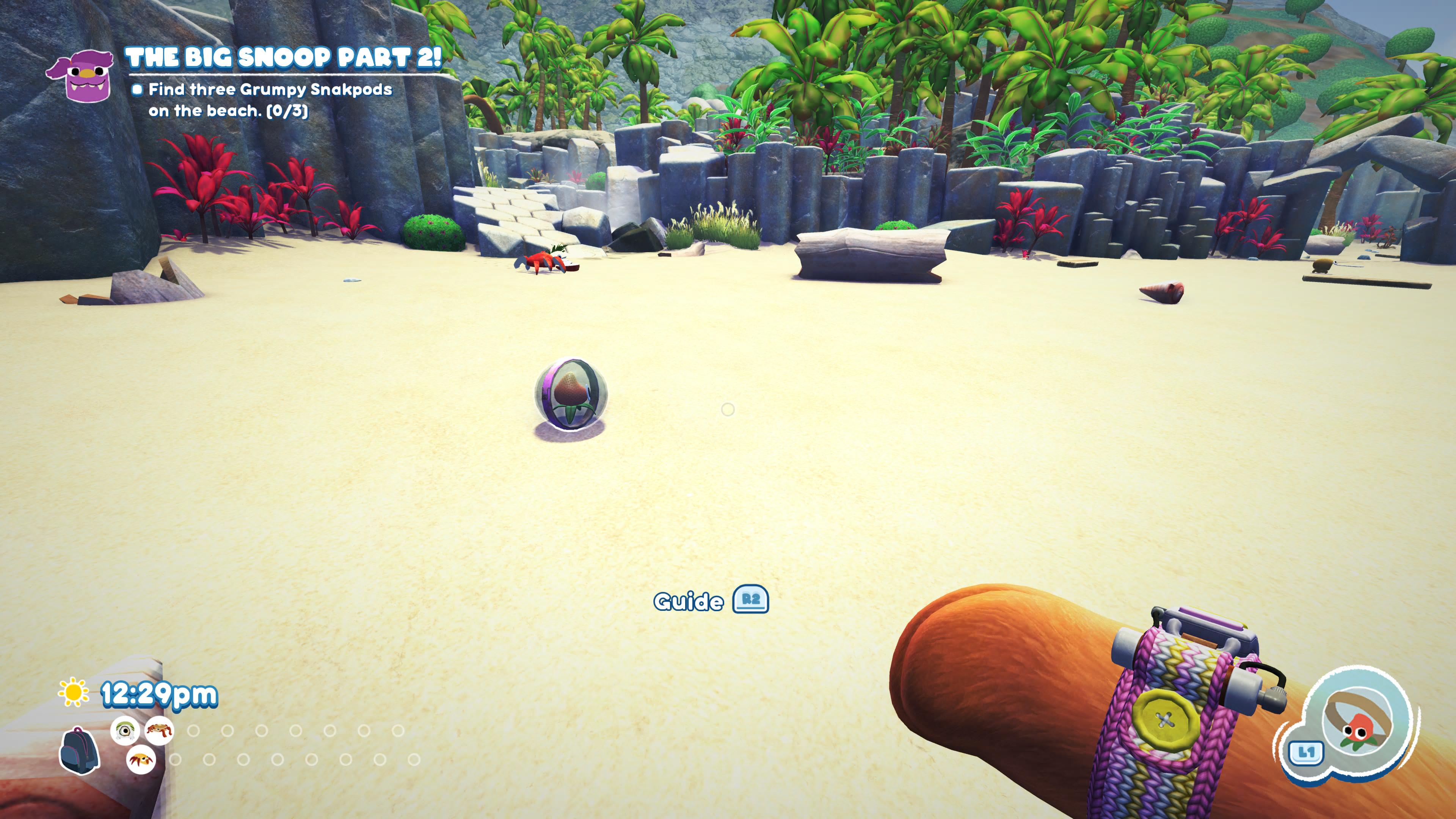 Missions are almost always the same. For different reasons, each Grumpus needs you to catch them a certain type or a certain amount of BugSnax. For instance, Snorpy, will not return to town until you convince him he is not being watched by the Grumpinati. Then there is Gramble who thinks it is wrong to eat BugSnax, he has been keeping them safe as pets. Gramble’s pets go missing and it is up to you to use tools and traps to restore his sanity.

The game’s main mechanic is using tools to catch the various BugSnax. Each of the 11 different tools gives players unique methods to capture each of them. For instance, the slingshot allows you to shoot different condiments. Each condiment attracts different BugSnax. Ketchup lures out Bungers while hot sauce will entice an Incherrito. The springboard on the other hand allows you to reach areas you otherwise can not reach and also launches BugSnax into the air.

Trapping, catching, and launching BugSnax is fun. Many of them are simple and easy to catch, though others have a puzzle to them. Cinnasnail’s are found out of range crawling on rocks. You have to lure them down with chocolate sauce or use a launching pad to get to where they are. The BugSnax you need to catch to progress is fairly simple with a few exceptions. Some of the more difficult ones, I was not compelled to chase after and complete. I found myself doing the bare minimum and never felt really driven to finish my Bugapedia.

The nine locations you travel to are very different from one another, and each has its own set of BugSnax that live in that region. There are areas like a snowy mountain, a beach, and a canyon. The regions develop the tone of the game as well as prevent it from feeling boring too quickly.

BugSnax Is One of the Better PlayStation Plus Indie Games 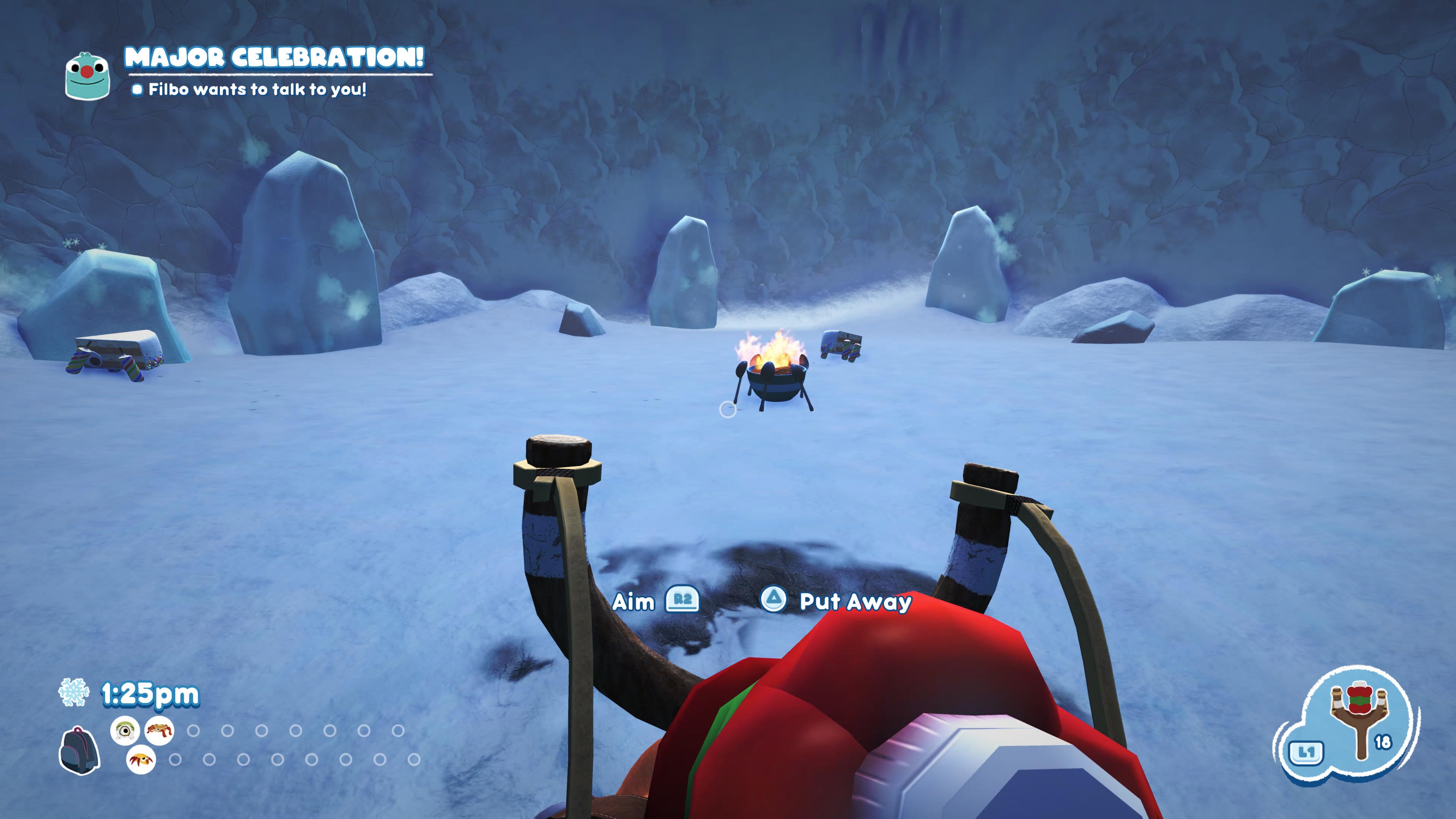 Technically speaking the game does almost nothing to take advantage of the PlayStation 5. While the music is great it does not have the 3D audio that Sackboy: A Big Adventure has. There are some fun melodic tunes as well as the catchy title song. The simple synth score fits great with the environments and weather. Similarly, it does not do much with the controller like Astro’s Playroom does. It does run at a smooth framerate and in 4K resolution which helps. Also, while it is not Sackboy, it does do some small things with the controller like adding mild tension with the slingshot. Yet nothing that really makes it a great “next-gen experience.”

While BugSnax is not some revolutionary technical achievement, showcasing new hardware, it is fun to play. The story is fantastic, despite not quite managing to deliver on a final twist and the characters are hilarious. BugSnax is unlike anything you will play this year. If you can develop an interest in catching all of the BugSnax this will be a great experience for you. If not, the PlayStation Plus title is still worth adding to that library for a cheap laugh. I would delete both of these qualifiers.