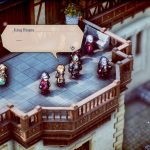 We finally got a full Nintendo Direct this week! There was a decent amount of news that started with new Smash Bros. characters, included Mario Golf news, and more. We may have not gotten Breath of the Wild II news, but we did get a look at Square Enix’s next strategy RPG.

For fans of the Bravely Default series and Octopath Traveler, say hello to Triangle Strategy. If you are itching to try this out, there is a free, multi-level demo available on the Nintendo Store. This game will not come out until 2022, but it is already looking like a potential game of the year contender. 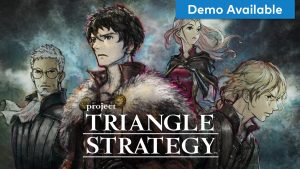 Before we get into the gameplay or story, we absolutely have to talk about this game’s art design. It calls its art system “2D-HD,” where the character sprites are pixellated, two-dimensional characters, but the environment is 3D. An isometric camera follows cutscenes and combat, which further elucidates the artistry of these virtual dioramas. You can also move the camera around the level which comes in handy as you climb up ladders and go down hills.

There Are Levels To This Combat

Combat does not just involve knowing how far you or your opponent can attack, it relies on your positioning. Every level has raised and lower surfaces for units to climb to. Opponents attacking from above have tactical advantages and deal extra damage. Some moves even have additional effects when attacking from above. In the words of the late, great Billy Mays, “But wait, there’s more!”

At least two more important things: One, players can survey the field and talk to their units before a battle, which we will expand on in the next section. Then, during the fight, units can deal extra damage if they are close by an allied unit doing damage. For example, if a unit has an ally right behind a foe the unit attacks, then that ally will deal extra damage.

These multiple levels make for intriguing gameplay that requires extra forethought and adds an interesting spin to the grid-strategy combat system. 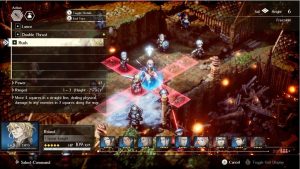 Triangle Strategy Even Has Something For Decision Makers

One last notable gameplay feature should catch Mass Effect and The Witcher fans. There are various story options within Triangle Society. Each choice has options based on three “convictions”: Utility, Morality, and Liberty.

The more decisions you make, the more you shape the main character, Serenoa’s, convictions, and you shape who joins your journey. Circling back to the above pre-battle surveying, here is where those choices can happen. During the demo, there was a narrative choice about protecting an important character to make before the first fight.

Square Enix carved out an interesting niche for old-school RPG fans. Even without Final Fantasy, Square Enix makes a lot of interesting RPGs. Triangle Strategy still has a year left of development but is already looking to be a great addition.