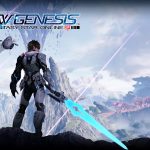 You are reading
PSO2 New Genesis One Year Later

PSO2 New Genesis has been out for a little over a year. In the very beginning, it was a rocky road and I was very honest about it when I first wrote about it. It was one of the worst experiences I personally had with a game release and I was mad. Over a few months, some improvements were made for PSO2 New Genesis. Unfortunately, it was barely enough for me to fully get back into the game. However, there is a silver lining though and we are going to talk about PSO2 New Genesis one year later.

When PSO2 New Genesis was released the game was plagued with a lot of issues. When in main hub areas players constantly complained of vital NPCs not loading in. There were some major clipping issues as well, causing me to fall through the map in many areas. I would be walking up a ramp and clip right through the map. After the release of PSO2 New Genesis, I could not even load into the base game at all. It is supposed to be connected with New Genesis, allowing players to freely go back and forth but without any items carrying over between games. Only appearance items can be used between both games. 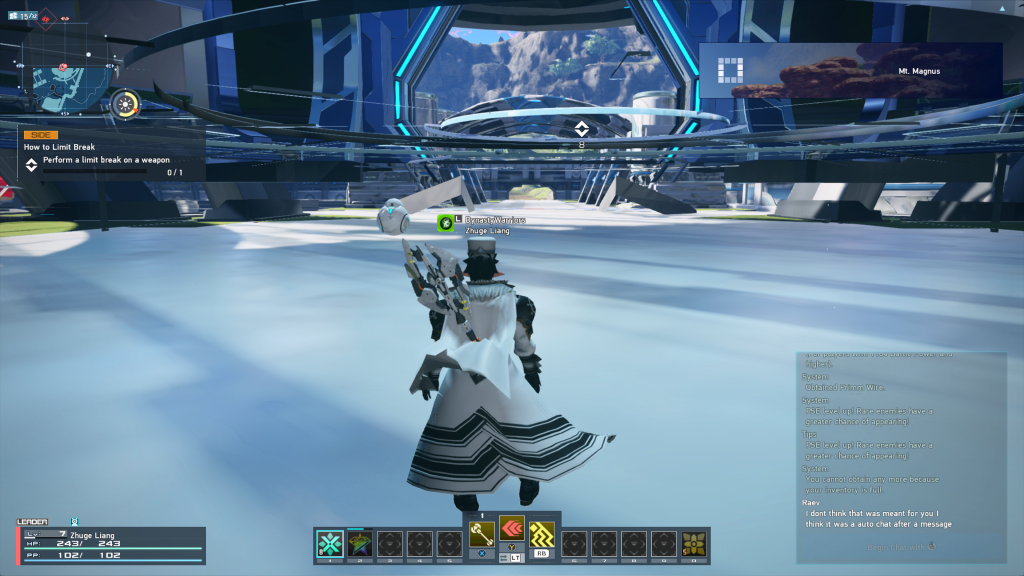 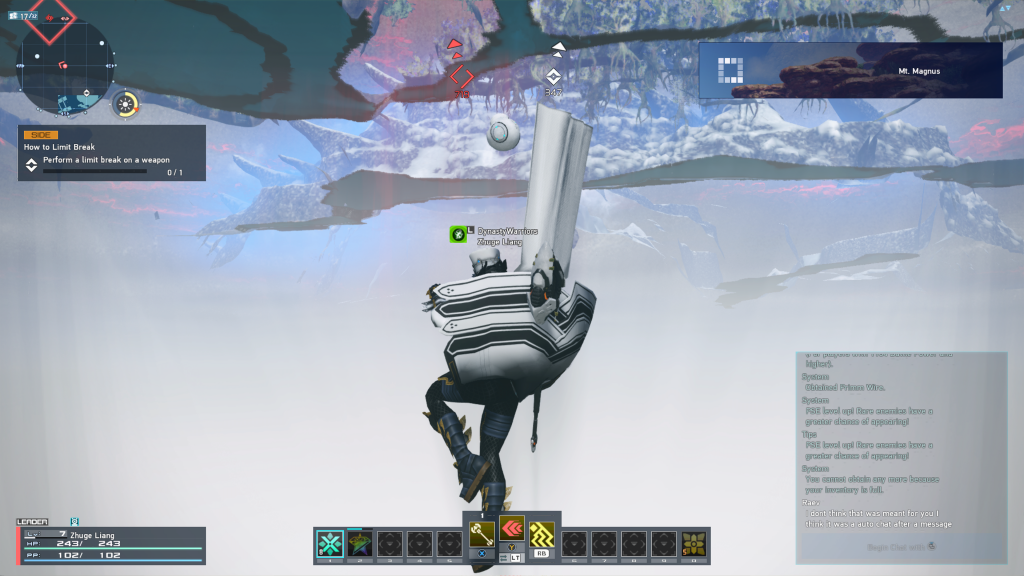 However, over a few months period, the game underwent some much-needed improvements. Finally, I was able to try some quests thanks to the NPC’s loading in and not falling through the map. It seemed like PSO2 New Genesis had the proverbially Rags to Riches story. I was happy at the time but it was not enough for me to consistently play. I was getting a busier schedule and less game time. Naturally, I preferred to play less broken or games that weren’t broken at all. PSO2 New Genesis began to sit idle most times on the back burner. Waiting for a big redemption arc even with its great visuals. 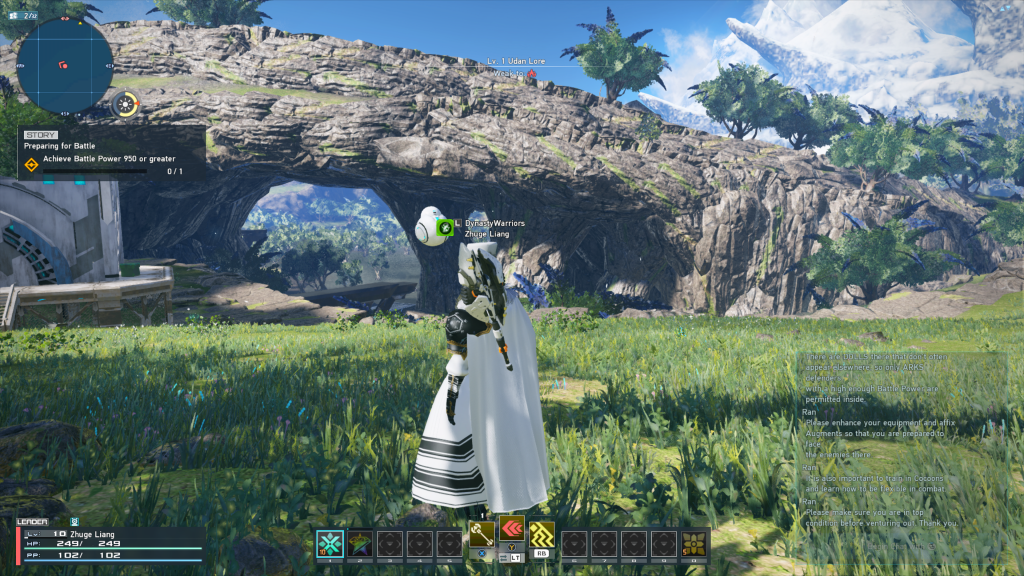 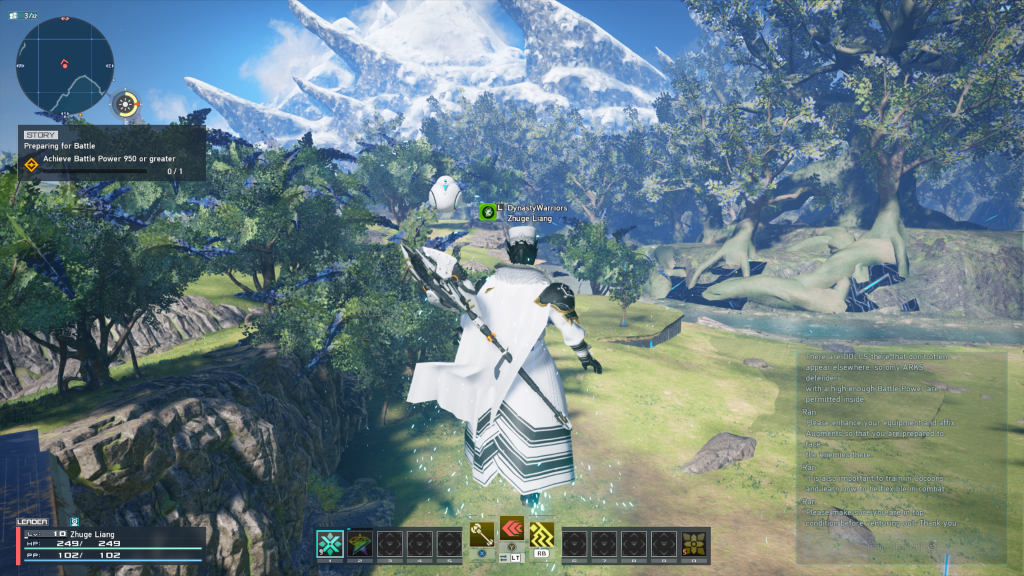 To understand my love for Phantasy Star games and why PSO2 New Genesis is important to me, some people wanted to weigh in. First, before they do weigh in, I could tell the story of how after my daughter was born, she would watch me play Phantasy Star Universe on Xbox 360. We would just sit in my recliner for hours and she loved it. Some of my friends have been anxiously awaiting my return to the game. These are people I met during the pandemic and for hours upon hours, I would talk to every single day. That was a tough time for everyone in the world. These people I met in this game helped me through that time and became family. 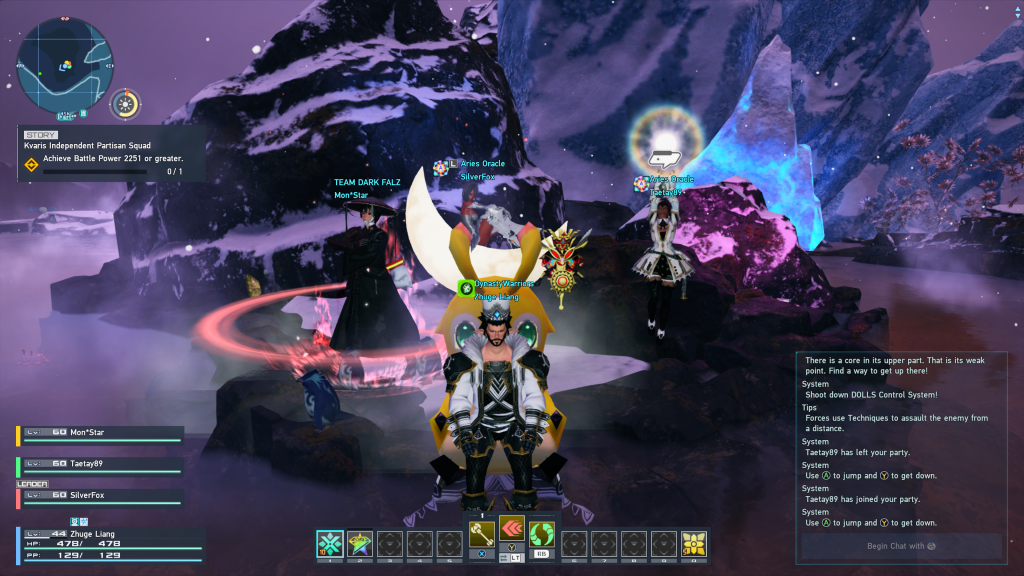 When it came to me playing PSO2 New Genesis, Pso God (Chris), Lucaria Fox, and Crazyddwayne had some thoughts to share. Chris also known as Pso God on his YouTube channel had this to say:

One of the best things about PSO2 New Genesis is not only the growing community but also all the content coming out. You are able to log in with friends and family to have hours of great adventures. From the Dark Falz 2 runs, farming Ancients, to just hours of fun with friends hanging out in rooms and stuff. It’s always an eventful and fun time. Also, Chris always got me working on some crazy new gear, augment, or idea he has for his gear. I’m his personal gear maker lol 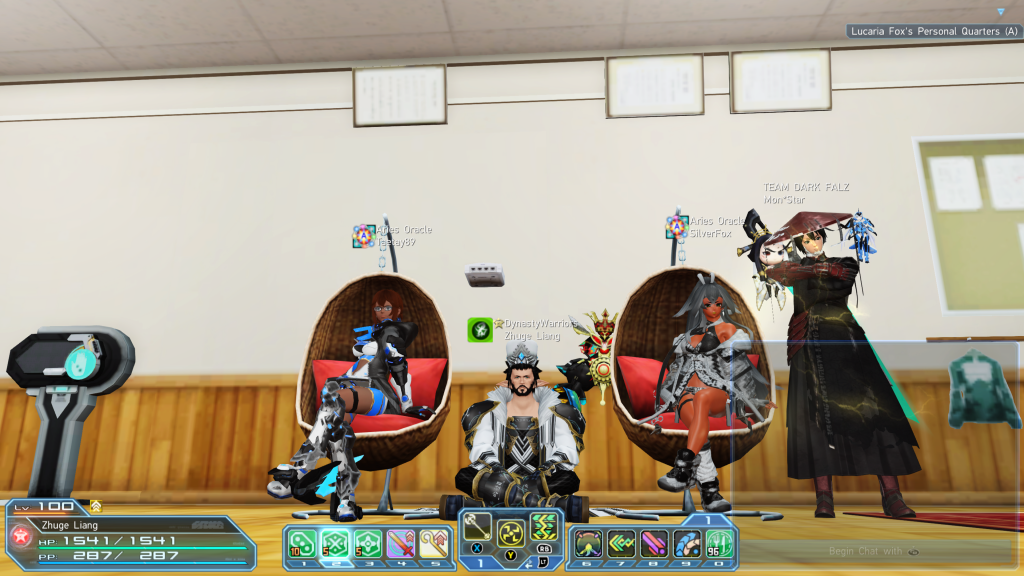 Lucaria Fox, a very powerful Force character in the PSO2 New Genesis wanted to chime in with this:

From Chris holding Million Dollar Days where he is practically giving away million dollars of items, gear, room decor, outfits, etc to his friends. To us going on many adventures together, it’s never a dull moment with us four in a party. I have so many wonderful times I could share here. I will say though my happiest activity is working on our rooms together. Most of us took a lot of time to make them look amazing. If you know Chris you know his rooms got the Christmas stuff all year round. I am excited to see what our future adventures entail and what trouble rouble we can get into since Chris has returned to the game. 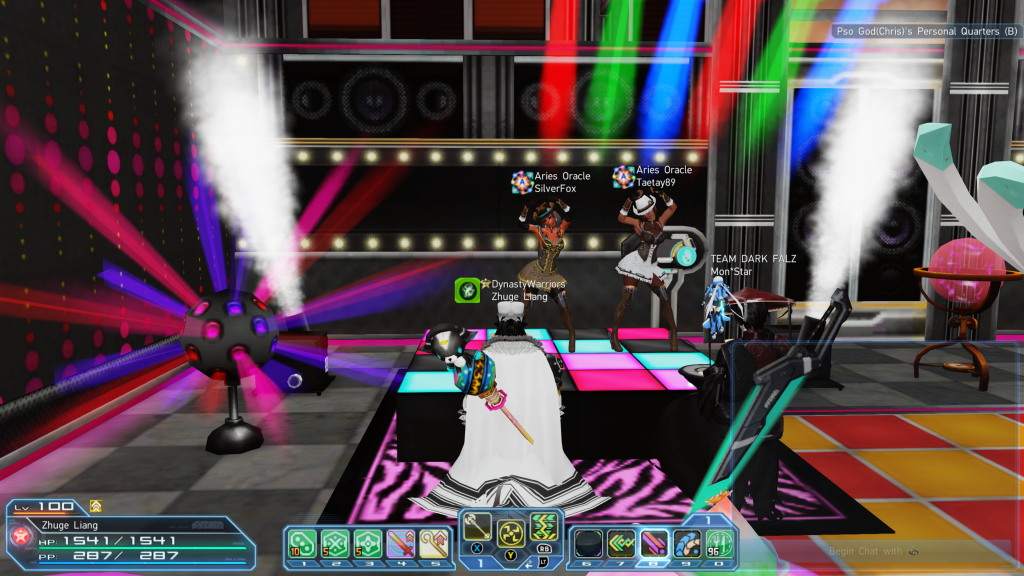 The most energetic one of the bunch, and one of the funniest, is Crazyddwayne and he wanted to say this:

I enjoy all the great times with C Unit (me, the author) and his excellent support-style Force character Zhuge Liang. Even though he has to change his style of play in PSO2 New Genesis lol. One of my favorite things I have in-game was the Dark Rappy Suit I got during one of his Million Dollar Day events. He even once did a 10 Million Dollar Day event where everything he gave away was over 10 Mill. Chris once ran the same quest over and over for 14.5 hours and only got one really good item and he even tried to give it to me. Chris is a great friend and we’re glad he has returned to the game. He just needs to remember the world is my arena, lol. 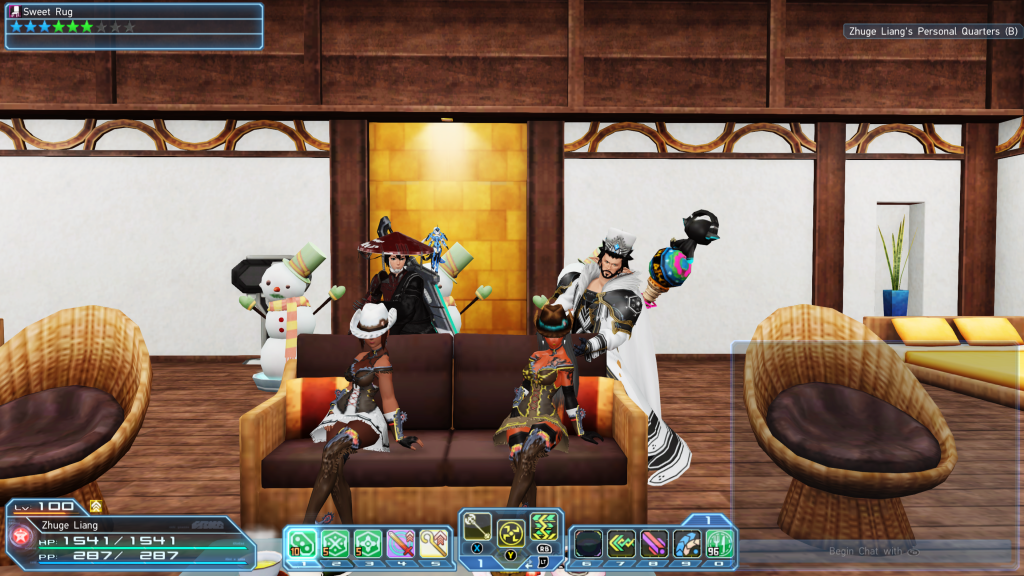 Many hours went into PSO2 and PSO2 New Genesis participating in countless missions, character improvement, rare item hunting, and much more. The game’s community, for the most part, has always been welcoming in my experience. These are just four of the people I grew close to as they are family now. I have made many other friends playing these games too, especially the great people in my alliance Dynasty Warriors. Even in my extended absence from the game they managed to keep our alliance going and fresh which was great.

Now, when I left PSO2 New Genesis, they were in a good spot when it came to improvements. So a week or so ago I decided to jump back into the game to see how things were going. Let me tell you this, it looks absolutely amazing, especially on Xbox Series X. Even though it already looks amazing it seems continued work has been put into the visuals for the game. The movement which originally felt clunky now feels more free-flowing even on the snowboard. Yes, I did snowboard, even though I still don’t have the hang of it quite yet. I have personally experienced absolutely zero lag or stutter in the most populated areas or even when transferring to base PSO2 areas.

There have been plenty of appearances and extra items added to the game. You can level up your mission pass to get a bunch of goodies. If your mission pass is gold, you get double the rewards. You have access to scratch tickets which you get free or you can buy some too. These gain you access to many things from star gems, appearance items, gear improvement materials, and much more. Star gems can help you get things like experience buffs and rare drop rate increases. If you don’t need any of that stuff, you can sell a lot of it on your personal shop to other players and try to get rich.

PSO2 New Genesis is in an amazing place right now. No lagging in areas plus all the different missions can always keep me occupied. I was level 21 when I came back to the game and on the first day back, I managed to get to level 40. They also offer PSO2 Day for all premium members which gives added benefits too. However, there is still room for improvement. The game can raise the level cap at some point, give access to rooms and the casino in PSO2 New Genesis, avoid locking new areas behind the Story quests, and by providing the last log-in date for people as a start. All MMOs provide a player’s last log-in date, so that should not be that difficult to implement.

I recommend if you have ever been a Phantasy Star Online fan jump in and give it a try. Players will be pleasantly surprised by everything the game has to offer at this point. This is only 1 year into the game’s life cycle, and I expect long-term support from the developers. PSO2 did not even release in the US until 8 years after its original release in the East. Xbox Game Pass usually offers subscribers a monthly reward for PSO2 New Genesis that you can claim to help out a little. Expect an even more active player base once cross-play opens between PlayStation and Xbox platforms.