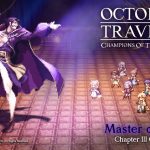 You are reading
Octopath Traveler: Champions of the Continent Review

Octopath Traveler: Champions of the Continent is a turn-based JRPG developed by Square Enix. When an already existing game gets a mobile spin-off, there is a collective sigh of disappointment. Rightfully so, recent examples like Diablo Immortal show that there can be a well-made game ruined by one major aspect.

As such, being a fan of Octopath Traveler, I went into this mobile game with cautious optimism. After finishing its main story, I am very happy to report that the experience on offer paid dividends on the gamble. Leaving me hooked and eager for the next play session.

Octopath Traveler: Champions of the Continent, takes place long before the events of the original game. You play as the wielder of a special ring bestowed on to you by a divine force. Tasked with taking out three powerful individuals who possess similar rings. A demented playwright, a soulless man abusing his power to dominate entire villages, and a twisted wealthy woman who does not see people other than herself as human beings. The build-up and payoffs with these spectacular characters always surprised me. Alongside some references to the main game.

From eerie beginnings to genuinely shocking twists and turns. Each chapter of their stories always kept me hooked and anxious. These stories were the pinnacle of the entire narrative. The way the game never shied away from the sudden deaths of characters I grew accustomed to. As well as changing characters, like a mother disavowing her child for approval from one of the characters was shocking to me. From the moment you collect them, the rest of the world begins to open up with new cities, locations, and tons of side quests to sink your teeth into.

However, only one side quest I have finished felt worth it. Since it creates a new town for you to invest time into for daily rewards. The rest felt too short as a result. But the rewards always made the adventures worth the time. Such as items to help characters level up.

While the story structure in Octopath Traveler: Champions of the Continent did not differ from the original game, the way you travel the world is very different. Since this is a mobile title, you will have to swipe left, right, down, and upwards to navigate along straight lines. When you are moving along these pathways, when you come to a split in the way, you can change directions to get where you want. However, these paths are not linear so if you want to explore the rest of the map you can do so at your leisure.

You will still engage in random battle encounters as you walk around outside of towns. As well as being able to go along hidden paths to collect treasure chests. This shift in navigation works well for the title and allows you to be lazy if you’re just going from one place to another.

Aside from that, you go through the same areas as the original game so it never lost its spirit in that regard. I would have liked to speed up movement just so I can get to certain locations quicker. Especially if I have to take consistent breaks with the similar yet improved combat system.

The combat in this game is similar to the original with some interesting improvements. Primarily the addition of a second team you can swap back and forth with. Allowing you to have eight characters in combat. As well as allowing characters to heal and regenerate SP if they are in the back. This allows more room for error, as you can use a full turn to attack with the front row and see if the defenses of the monster can be broken. If not, you can swap to the back row and see if they can break their defenses.

The way you break enemy defenses is by using specific spells or weapons a certain number of times to stun an enemy and they take more damage while they are stunned. You can use BP that is gained every turn to increase the number of normal attacks you can do in a turn. Or use them to amplify the damage of spells or special attacks. This combat system is as great as ever and allowing for more focus on how characters are used rather than what characters should be used is great to me.

However, there were some other tweaks to the gameplay that tilt the balancing in the enemy’s favor. Such as world bosses that guard special chests can have way too much health and deal too much damage even if you are at their level. As well as attacks that hit an enemy when they are not a weakness feeling very weak. These changes did make me think more on a turn-by-turn basis.

But there are some crazy shifts in enemy difficulty as a result. Such as gating me from seeing the ending of a chapter I grew attached to and forcing me to level up. None of the spikes in difficulty negatively impacted my experience, though.

Each character in Octopath Traveler: Champions of the Continent has its own unique job trees you now use to unlock abilities and passives. Every character works on a three to five-star ranking system and 5 stars has much more to unlock as a result. Outside of just abilities and passives like more innate defense against an element in combat, you also unlock more health and SP, as well as other attributes. As opposed to the original game offering so little progression as you level.

This system is great since it is more streamlined and helps every character you collect stand out. But how do you get more characters? Well, this is a touchy subject.

In the original game, you had eight normal characters to unlock and level up. Octopath Traveler: Champions of the Continent has a ton of characters and they are mostly locked behind the “Sacred Guidance” system. This system is essentially just lootboxes with exorbitantly high prices for the premium currency “Rubies”. Every roll can give you a random character and you can a lot of the time be given a duplicate. Which gives you currency to unlock more levels for the already collected character.

The problem with this is that most new characters are only available for a limited time, incentivizing players to spend money on rubies to get more rolls. Every pull is thirty rubies, and three-hundred rubies cost $29.99. Which is shameless, to say the least. If players have gambling problems and more money than sense. They can be taken advantage of to get top-tier characters. Thus, they should stay as far away from this game as possible.

Even if I have a pretty good team without spending a dime, there will be people with far less patience who will be too quick to spend. I understand the game is free, but these prices seem sinisterly skewed.

Octopath Traveler: Champions of the Continent still looks and sounds the same as the original game. I was playing on a Galaxy S21 on the lowest setting and the game performed very well. With no apps on in the background, I was able to get around thirty minutes per ten percent of the phone’s battery. The game did have some micro stutters when navigating the world. But I experienced no bugs, freezes, or crashes while playing.

The game had a lot of similar tracks to the original game with fantastic additions to the soundtrack as well. Such as Tytos’s boss theme and end-of-chapter boss themes as well. All of this coupled with fantastic voice acting really kept me invested in the stories. The game only has Japanese voice acting as of right now and the cast absolutely killed it. In particular, Auguste’s voice-over was marvelous!

Final Thoughts on Octopath Traveler: Champions of the Continent

Overall, this game far exceeded my expectations in the experience provided by just playing it. The antagonist stories were spectacular. The combat is heavily improved with some caveats that were very welcome and refreshing. The new progression system is more streamlined and cohesive. All within a game I have spent over 30 hours enjoying.

But the lootboxes make recommending this game difficult. You can play without spending a dime, but I know people with far less patience will fall prey to this. If you do not have bad spending habits? It is an easy recommendation. Since it is a single-player JRPG you can play on the go.

Octopath Traveler: Champions of the Continent is free-to-play and available now on iOS and Android devices.

8
A Real Game to Play on Your Phone