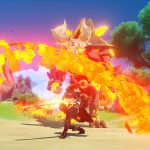 You are reading
Combat Tips For Genshin Impact

The combat gameplay in Genshin Impact is a layered and intricate system. While the game displays a few helpful guides to make the most out of battles, it does not tell you everything. Here are some combat tips to keep in mind while playing Genshin Impact.

Genshin Impact uses a single button for your character’s combo string. Each character will have their own flare and style when dishing out attacks. The same can be said for another move that can be pulled of mid-combo: a charged attack. By holding down the attack button, your character will start an animation to pull off a hidden move. Jean will execute an upward thrust; Kaeya does a multi-hit strike; Noelle spins her giant sword, etc.

Best of all, these moves can be pulled off mid-combo. So while you are slashing away at enemies, make sure to use your charged attack for some extra damage.

The game’s combat gives a lot of attention to the seven elements Anemo, Geo, Cryo, Electro, Hydro, Pyro, and Dendro. Or in other words, Wind, Earth, Frost, Lightning, Water, Fire, and Nature respectively. What makes Genshin Impact stand out is that these elements can react to one another in battles. The game wants you to experiment with these reactions, which is the ultimate benefit from having a diverse party of elements. To initiate elemental attacks, you first must you the character’s Elemental Burst or Elemental Skill ability.

Long-range characters have it a bit easier to dish out elemental damage though. Lisa, who uses a magic tomb, sends out quick lightning bolts. Amber, a sharpshooting bow user, can release fire arrows when holding her draw for a few seconds. 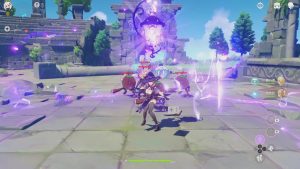 In any case, the enemy will be seen with a symbol above their head based on the element you used to attack them with. Pull off a second different elemental attack and you will notice the enemy has been afflicted with a status based off of your combination. For instance, using Barbara’s Hydro attack will make enemies wet. Bring out a character who specializes in Cryo to freeze them in place. My favorite combination to use is Amber’s Pyro mixed with Jean’s Anemo to create a whirlwind of flames. The game has many combinations, so do your best to find them all!

Combat Tip #3: Attack From Above for an Advantage

Genshin Impact not only has a variable amount of playstyles, but a few different ways to approach fights too. You will mostly run in and attack or start a fight from afar, but there is also another method: an aerial dive. To initiate your character’s diving attack, either glide towards a group of enemies or jump off a cliff or structure and press the attack button. You will not be able to use it jumping in place though. You will need to jump from a considerable height for the character to execute the attack. The aerial dive does decent damage and is a very useful preemptive strike.

Combat Tip #4: Use Your Environment 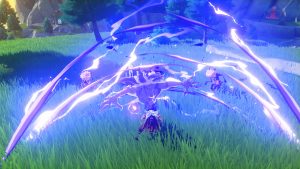 Similar to combining elements, you will want to pay close attention to your surroundings. Attack-based elements are not the only ones that can react to other elements. In fact, certain structures or environmental instances can react as well.

Given that Genshin Impact puts a heavy emphasis on the elements, it is only natural that your environment plays a factor too. If it is raining, make sure to add Electro-based and/or Cryo-based characters to your party. Since enemies will be wet from the rain, it is a perfect opportunity to freeze them with Cryo or to deal electric damage over time with Electro. Take advantage of certain structures in the world too, like fire-lit lamp posts. Execute Anemo near the lamp’s fire and you will be surprised at the effect it can have.

As a precaution, take care not to be too reckless. While it is fun and dandy to see elements react to your advantage, know that enemies can do the exact same to you.

Hitting the weapon attack button will start a small combo, and the end of that combo has a bit of delay before you can start another one. In Genshin Impact, you have the luxury of switching your characters in and out at will. The same rule applies even while in the middle of a character’s combo. So rather than waiting in that delay, switch out the character for another to continue the onslaught. This is most effective with sword users since they are close-range and can continue the combo more effectively.

In any case, this method is fantastic for dishing out damage. However, keep in mind that enemies’ actions are not interrupted with basic attacks. So while you can keep switching out characters for a combo extension, they can still break your combo with an attack of their own.

Genshin Impact is available on PS4, PC, and Mobile devices and is free to downloaded. Stick to LordsofGaming.net for more tips and tricks on the game.