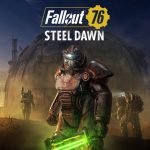 You are reading
Fallout 76: Steel Dawn Brings Brotherhood Of Steel

If anything, Fallout 76 has has a very interesting lifetime during it’s history. It’s no secret that the launch of the game has been turbulent. However, like many other games that started off rocky, Bethesda Softworks has been able to find a way to pivot Fallout 76 in the right direction. Earlier this year, Wastelanders was released as a free update to all players, bringing new quests, direly needed changes and included the highly requested NPC counterpart. Since then, Fallout 76 has seemingly released minor updates bringing quality of life changes that seemed to be well received by those still playing the game. The next update, Steel Dawn will shake things up, again.

Another missing piece, and a quite popular part of the Fallout lore, has been the Brotherhood of Steel. While many references can be found in Fallout 76 to the Brotherhood, their presence has been absent. That’s all about to change, and very soon too!

Fallout 76: Steel Dawn is set to release on December 1st across all platforms. The update will be free to all players, so another kudos given in the right direction.

• A New Questline – Determine how you will aid The Brotherhood of Steel NPCs in the first chapter of their new all-new story.

• New Locations and Gear – Unlock unique weapons and armor from Steel Dawn and explore new locations newly populated with members of The Brotherhood and other factions.

• Season 3 Scoreboard – Join Time Operative K.D. Inkwell in her quest for the Guild of Antiquities and rank up to unlock new rewards including C.A.M.P. Allies, Lunchboxes, and more. Beginning December 15.

• Lite Allies – Recruit two new allies as you rank up during Season 3, who offer bonuses exclusively from your C.A.M.P.