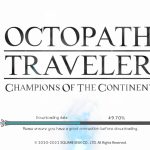 You are reading
Octopath Traveler: Champions of the Continent Impressions

With the release of Triangle Strategy behind us. There is a very bright future for the “2D-HD” style of games moving forward. Like Live a Live and the Dragon Quest 3 Remake for instance. But in between those game releases, there is another game to help you pass the time. That being Octopath Traveler: Champions of the Continent. The prequel to Octopath Traveler that is only going to be available on Android and iOS devices.

The game is in closed beta currently, so I can only speak on the opening segment of the game and the first chapter of the path I chose. The microtransactions are disabled as well so I cannot speak on that either.

What Octopath Traveler: Champions of the Continent is Like

The goal of this game in terms of its design is simple: To be a classical single-player turn-based JRPG you can fit in your pocket. But how does it differ from the original game? For starters, you play as a wanderer who has been given a special ring of power. Your quest is to go after three menacing characters aligned to three influences: wealth, fame, and power. So it is very clear cut on what you’re supposed to be doing. But getting companions for your journey is completely different. You don’t find them throughout the world just standing by waiting for your assistance.

Instead, you will be acquiring companions through the loot-box “Gacha” mechanic. Weapons and armor now require progressing through the story to unlock higher levels of gear only instead of just naturally finding better stuff along the way. The game also complicates how to upgrade equipment as well. You needed only the base currency in the original game. But you now need materials found throughout the world to forge equipment.

The job systems have been removed in favor of skill trees for each character. Leveling up rewards you with a skill point to unlock character upgrades, like skills or health increases. It is still Octopath Traveler, but it is very streamlined. But the combat is as brutal as ever, if not more.

The combat in Octopath Traveler: Champions of the Continent is very alike to the original game. With some improvements, and some downgrades. The improvements from what I’ve experienced so far are:

While the downgrades are:

The game does suffer from a lot of balancing issues, even in the first chapter of the game as I’ve detailed above. I can get through normal encounters just fine, but elite enemies are harder than the bosses you’ll face in the story.

The framework of the Octopath Traveler mobile game, is exactly that, a mobile game. So you’ll have really cluttered menu, bombardments of tutorials for things you can’t even use yet like the limit break system. As well as daily and weekly challenges that reward you with stuff that can break the game early on. I unlocked experience point consumables before finishing the first area and using them escalated my team a solid ten levels above the recommended level for that area.

So I was mopping the floor with enemies, and being given “Rubies” which is the game’s premium currency, which I can’t spend much so far. There’s no real promise of the “Nier Automata” event coming to the beta either. Moving around in the game feels more like a finger exercise since you have to swipe in multiple different directions through very boxed-in areas. It feels “off” to play when you’re not experiencing the story, the many scripted side quests, or in combat as a result.

I understand this is a mobile game, and a closed beta. But Octopath Traveler: Champions of the Continent does feel like a bit of a downgrade compared to the original game. Obviously, I’m still very new to it, so maybe as time goes on the game will grow on me, or surpass the original game. But all of the added systems I’m noticing, as well as some of the streamlining are concerning. I do like the experience personally, but it will be hard to recommend if the streamlining in the game doesn’t get applied to menu navigation.

If you’d like to sign up for the closed beta, all you have to do is go to your phone’s app store and just register. I signed up two weeks ago and got in one week ago.