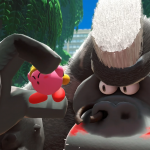 You are reading
Kirby and The Forgotten Land – Review 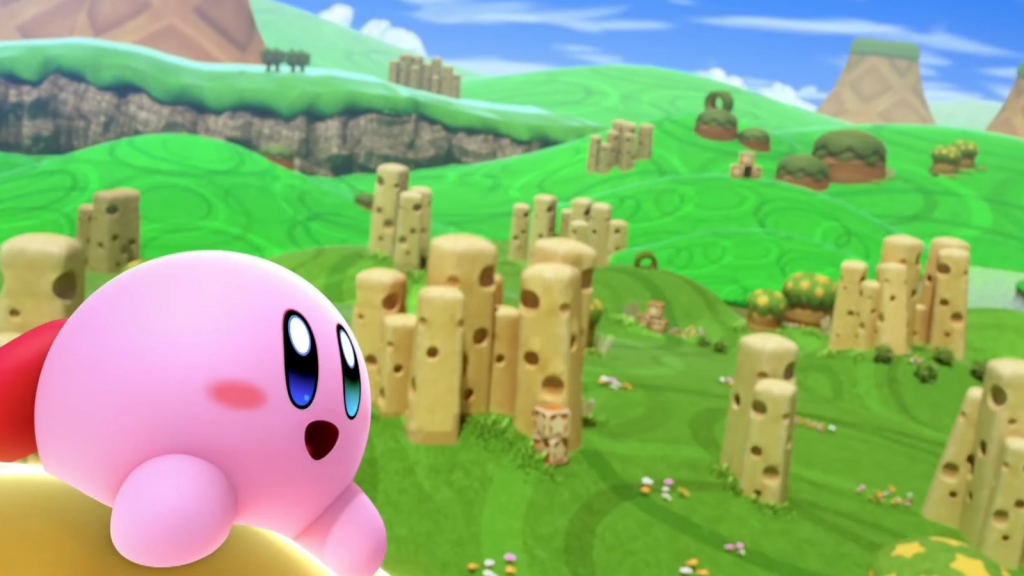 Kirby and The Forgotten Land is a much-needed palette cleanser after the onslaught of open-world games in early 2022. HAL Laboratories has crafted a fun, albeit short, 3D experience for the pink puff. The story is not anything to write home about, but the gameplay is engaging. It introduces some new mechanics and never overstays its welcome. The visual stylings are charming and lovely.  The performance is about what you would expect of a Nintendo Switch game, and the music is *chef’s kiss*. Float on over and dive into Kirby and The Forgotten Land!

It is another beautiful day on Planet Popstar when a mysterious vortex opens, inhaling Kirby and seemingly everything else. Kirby awakens to find himself washed up on a beach in a post-apocalyptic land called the New World. Here, a group called the Beast Pack are kidnapping the Waddle Dee and imprisoning them in cages. Kirby frees a new ally named Elfilin, and together they set out to free the captured Waddle Dee and put an end to the Beast Pack’s reign of terror.

I found the story serviceable in regards to establishing the setting and plot, but it lacks depth. The characters are charming and their motives are surface-level, but I never expected Kirby and The Forgotten Land to blow me away with its narrative. To be honest, I was uninterested in the narrative until the very end, but that is hardly a revelation considering the type of game this is. 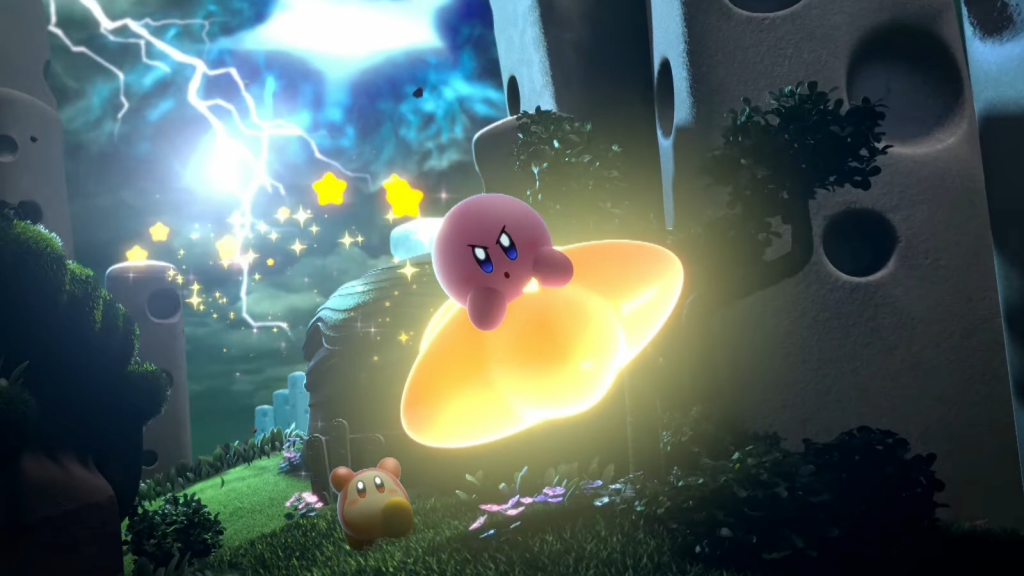 Kirby and The Forgotten Land is a 3D adventure game, and its gameplay is where it excels. HAL Laboratory masterfully implemented Kirby’s trademark Copy Abilities into a 3D environment. Each traditional ability felt familiar despite functioning differently and the new abilities were fun and intuitive.

Kirby and Elfilin soar around the World Map clearing stages, freeing kidnapped Waddle Dee, and completing Treasure Roads for Rare Stones in each of the seven Areas. The Areas sport diverse locales and their Stages are tailored to fit the theme of each Area.

Each Area in the World Map has unique Stages to explore, with secrets tucked into the nooks and crannies. Each Stage requires the player to make it to the end and free the captured Waddle Dee. Along the way, completing the four optional challenges will free even more Waddle Dee. To complete an Area, the player must rescue enough Waddle Dee to help you open the gate that is blocking your way to the Stage where the boss guarding that Area resides. 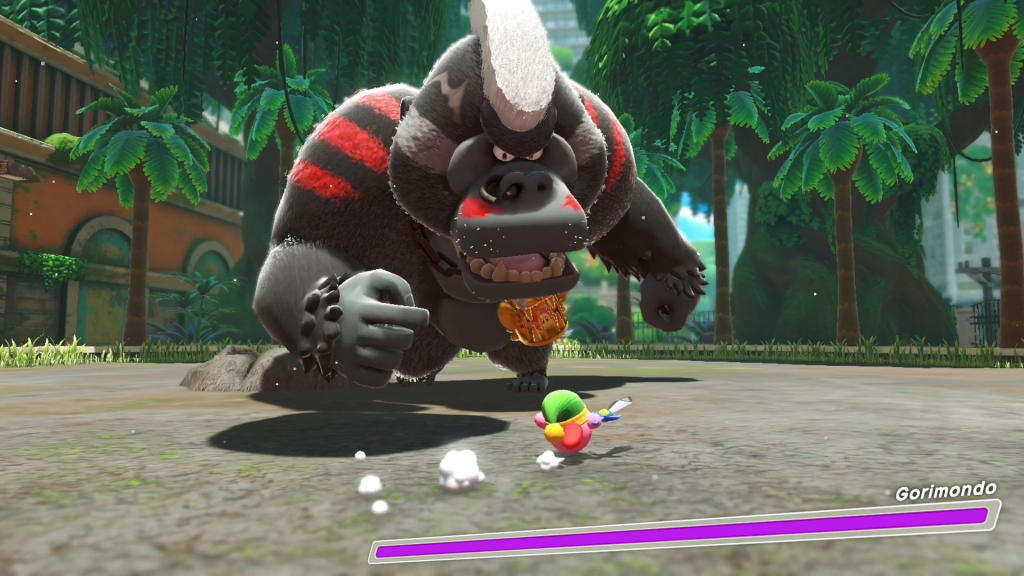 The bosses present enough challenge to warrant being a Boss. Each introduced its own combat mechanics that were fun to figure out and exploit. Even the mini-bosses that I encountered throughout the game never felt stale.

The Treasure Roads are well executed and add an arcade-like element to the game that I appreciated. Each Treasure Road challenges the player to use a single Copy Ability to complete the stage in the most effective manner. Some unlock as you complete Stages, but others are hidden waiting to be discovered. Completing Treasure Runs grants the player a Rare Stone which can be spent on evolving and upgrading Copy Abilities at Waddle Dee’s Weapon Shop in the hub space.

Each Treasure Road has a Target Time, that is not required to complete the challenge, but I would have appreciated an extra Rare Stone for reaching the Target Time. Fifty Star Coins is hardly an incentive for completing the most difficult challenges in the game. 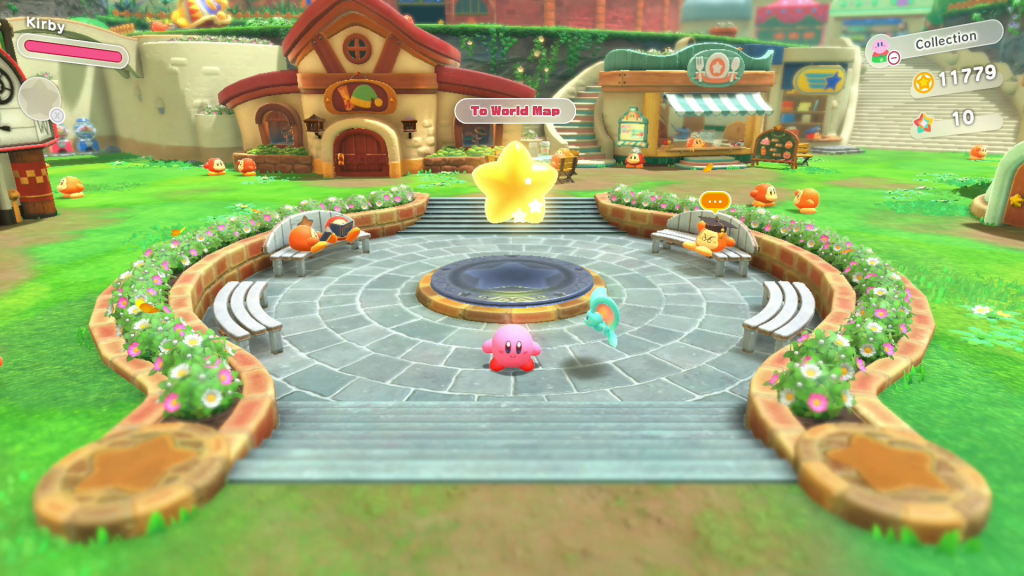 Last but not least is Waddle Dee Town (the hub area) which has plenty of fun mini-games to mess around with. Waddle Dee Town functions as the hub space for Kirby and The Forgotten Land. Here you can rest at Kirby’s house, playback cutscenes at the cinema, listen to the soundtrack played by a live band (sort of), and collect figurines from Gotcha Machines. You can also evolve/upgrade Copy Abilities at the Weapon Shop, buy healing items at the Café, and buffs from the Item Shop. Not to mention, you can enter discovered present codes at Waddle Dee-Liveries to receive presents and play a bunch of fun mini-games!

I had a lot of fun playing mini-games, despite their simplicity. Flash Fishing is by far the most simplistic, but arguably the most adorable. Help Wanted at the Café asks Kirby to wait on hungry customers. Tilt-and-Roll Kirby uses the motion controls of the Joy-Con controllers superbly to roll a marble through mazes and is actually quite challenging. The Colosseum functions as a rush mode to challenge bosses, which I found to be a little more difficult than they were in the Stages.

More Than Meets the Eye

There’s also the Observation Tower where you can overlook Waddle Dee Town. I would encourage you to return here once you have rolled the credits for a little something extra.

I played through the game on Wild Mode (the harder difficulty) which I still found to be fairly easy. Treasure Roads and boss fights present the most challenges, without ever being too difficult. It is not often that a game comes along that plays great, pushes back with challenges in an appropriate way, and manages to not overstay its welcome. 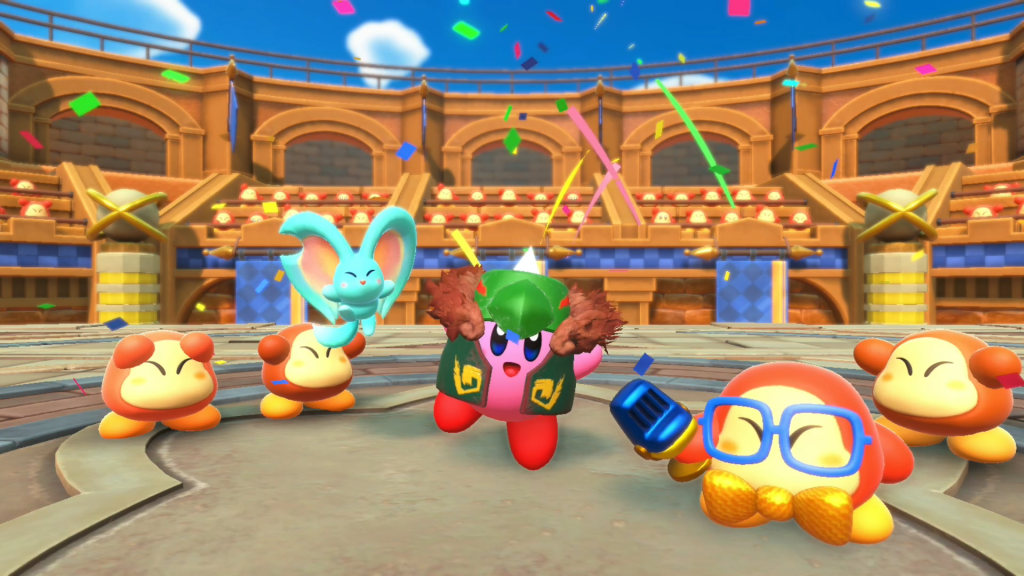 Kirby and The Forgotten Land is charmingly beautiful and pops with color. HAL Laboratory has converted Kirby from the 2D plane to 3D and managed to maintain the endearing charisma of Kirby and the franchise’s cartoon-pop aesthetic.

What made me the most intrigued with Kirby and The Forgotten Land was the post-apocalyptic setting. Instead of transporting the pink puff from colorful Planet Popstar to a desolate, gray/brown wasteland; Kirby instead found himself in an overgrown, reclaimed land. New World explodes with color while showing the signs of neglect and abandonment. HAL Laboratory nailed the environmental design and effectively communicates the world’s story without playing into tropes.

While the Nintendo Switch continues to show its age with poor performances with some of its latest titles, Kirby and The Forgotten Land is an exception. If you can look past the thirty frames-per-second cap during gameplay, you can find solace in the consistency. The only exceptions are lowered animation frame rates of characters in the distance and Stage/Treasure Road overlay menus exceeding thirty FPS.

Everything considered, Kirby and The Forgotten Land looks great and runs well on the Switch. It is still living in the past due to the hardware the game was developed for, but HAL Laboratory managed to make a beautiful game on limited hardware. 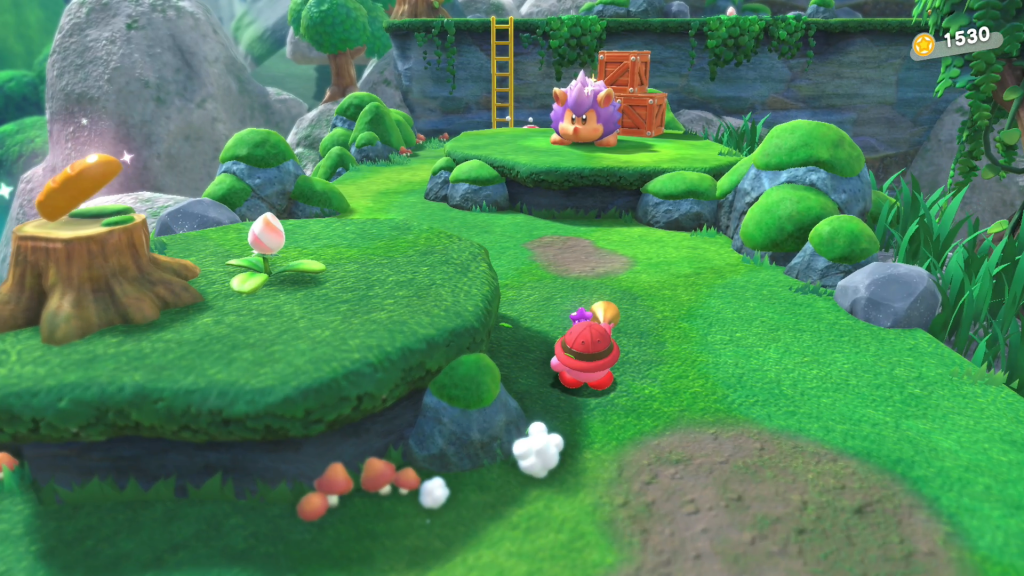 The Sounds of the A-Pop-alypse

If you are like me, when you think of Kirby, you think of soundtracks full of certified bangers. After all,  Wiz Khalifa didn’t sample Grape Garden from Kirby’s Adventure during a lapse in judgment but instead a moment of clarity. Kirby and The Forgotten Land is no exception to this rule.

Throughout my playthrough, I was bopping and shoulder-rolling to the cartoon, pop-rock soundtrack. These tracks perfectly compliment the tone of each environment. I love that there is even a place in the hub space where you can listen back to the entire soundtrack. HAL Laboratory knows they produce heat.

The overall sound design is great! Everything from Kirby swinging a sword, breathing fire, or simply climbing a ladder has unique sound effects. HAL Laboratory even captured the satisfying pop of a Gotcha Machine capsule incredibly well. 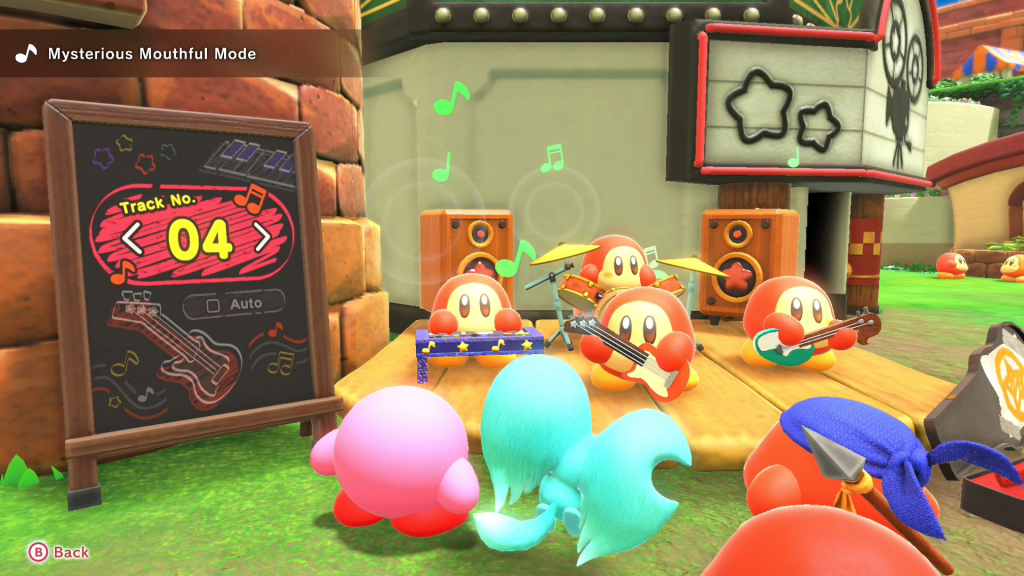 Forgotten, But Not Alone

During my playthrough, I sat down with my girlfriend for some couch cooperative play and had a blast. However, I do not think it adds much to the game. Running through stages together was full of laughs. Ganging up on bosses was a joy and playing mini-games together was a ton of fun. Tilt-and-roll Kirby (the marble mini-game) required us to pass the Joy-Con controller back and forth. The Pro controller was not capable of the motion controls, but that was not a big hurdle. Disappointingly, while the second player, Bandana Waddle Dee, can respawn if they die; if Kirby dies it is game over. It is an oddly punishing design choice for an otherwise casual mode.

This says to me that the co-op mode is more for ushering a child or a less-experienced player through the game. Playing with two experienced players highlighted the imbalance but did not take away from the experience in a major way.

Conversely, if you want to introduce your little sibling, child, or inexperienced spouse/family member to gaming, Kirby and The Forgotten Land could be the perfect game. Especially when you consider its accessibility, charm, and focus on gameplay over narrative. 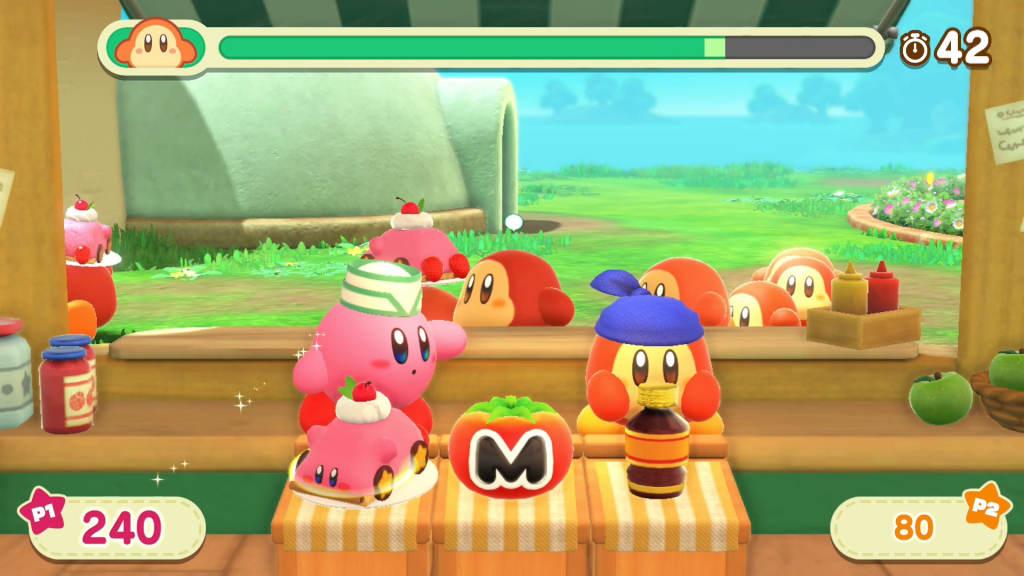 I absolutely adored my time with Kirby and The Forgotten Land. HAL Laboratory has reimagined Kirby by exploring his possibilities in a 3D space and knocked it out of the park. I am excited for what lies ahead for the pink puff and his pals.

After rolling credits, I dipped my toes into the post-game. I still have plenty of Stage challenges to complete, not to mention Target Times in Treasure Road challenges. However, this really is a weekend game. You can beat it in less than 10 hours, and I think that will be a bit of a letdown for some people.

I think of a game like Ratchet & Clank (2016) being forty dollars (USD) at launch and look at Nintendo with a little side-eye after completing Kirby and The Forgotten Land. Personally, I think Kirby and The Forgotten Land would make a spectacular pack-in game if bundled with new Switch consoles. But someone simply picking the game up on its own, I might suggest waiting for a sale.

Have you played Kirby and The Forgotten Land? Do you want to check it out? Let me know what you think in the comments below! 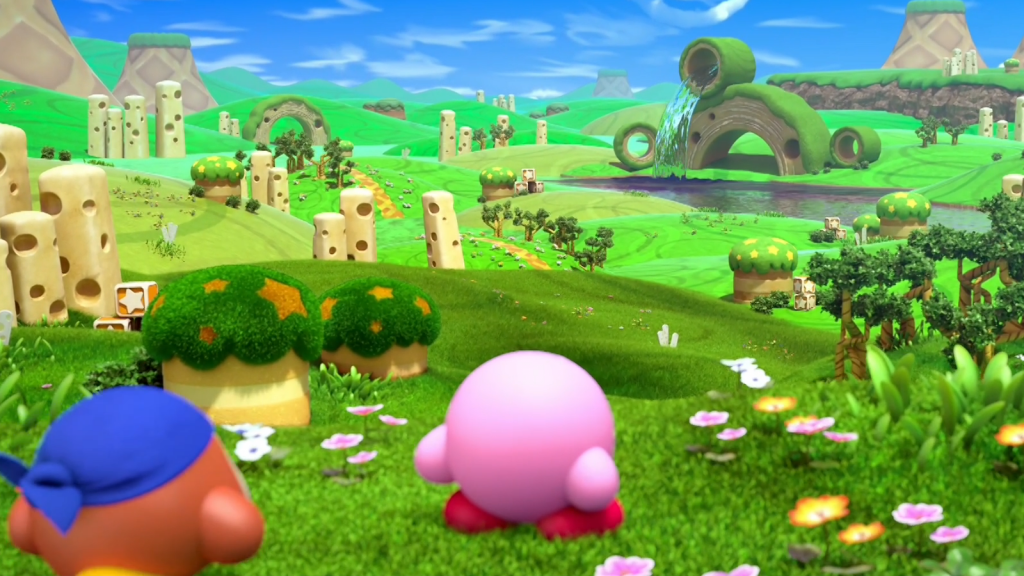