You are reading
Demeo: Reign of Madness Tips And Strategies

The final chapter in Demeo’s Mad Elven King saga has arrived. Many adventurers have joined in the fight to take down Rackarn using many strategies. So today I am going to mention a few Demeo helpful tips or strategies to help you on your adventure through Reign of Madness.

With the release of Demeo’s Reign of Madness, we got a new ally to join us, Uhrak the Barbarian. Uhrak is by far the most versatile hero and can be used in many different ways. Being able to navigate around the map with his trusty grappling hook, the Hook of Varga, allows for many different strategies. Some of the class-related cards Uhrak has are Talakk’s Hookstrike, Barbaric Chainwhip, Howl of the Ancients, Varga’s Retribution, Pit Fighter’s Leap, and The Leviathan. A few of these ability cards allow you to jump into the fight and deal damage or push enemies away. Hookstrike even heals you some.

Pit Fighter’s Leap allows you to jump over objects and deal damage, but be sure to have a plan in case you wind up in the middle of a mass of enemies. Chainwhip can push enemies away clearing some space for you and your allies. Howl of the Ancients weakens the enemies while Varga’s Retribution drains the power of enemies to increase your attack for short time. The Leviathan is an ability that chains enemies and allows them to slow them down a small bit and deal a little damage. Uhrak also has a blank card slot which is for lamps in the adventures. Use the chain to grab a lamp and on the following turn you can throw the lamp and it detonates upon impact.

The hook has proven very useful in my time playing and I love it. You can get around the map faster. You can pull yourself to big enemies or you can pull the enemies to you. The hook does deal some damage as well which is great. If you have an ally in trouble that needs saving you can hook them and pull them to safety. I feel Uhrak really can set the tone for the battle and if you know me that might sound crazy because I’m a sorcerer fan. I will say the barbarian is closing in on the Sorcerer as my favorite Demeo hero though. 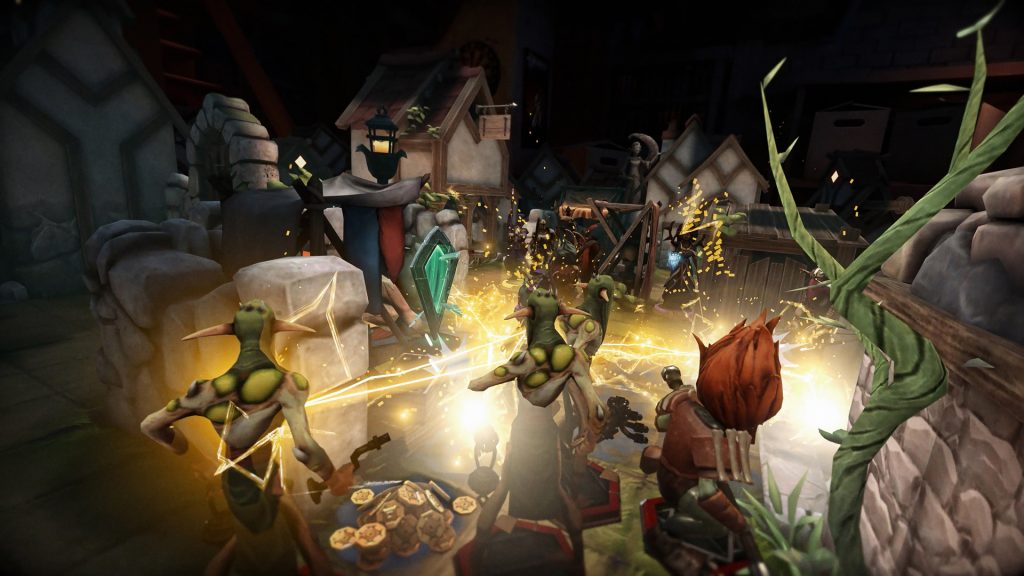 New To The Demeo Adventure

In Demeo, the Reign of Madness brings many new things to try to help the adventures defeat Rackarn as well as hamper them. When playing through this Demeo Adventure we get some new Villagers/NPCs to help us along the way. There are new villagers that provide you with a health potion as well as some gold. Both will prove vital in your time with Reign of Madness. Then there is a Sellsword you can hire to follow you around. Whoever pays the gold will have this crossbow-wielding ally follow around to hopefully help take down the enemies. Last, but not least is the beggar I wanted to talk about where you can trade cards in for other things. You can trade a Water Potion and get a swiftness potion. Trade a Teleportation and get a Golden Scarab.

There are a couple of other ones, but the most important one is to trade in a Rejuvenation and get a Ralmas Reckoning. You will definitely want to save the Reckoning for the boss and we will get to why that is. No new adventure is complete without new enemies and Reign of Madness brings a particular one that makes things super hard if not dealt with. The Elven Spearman can be very deadly because he hits hard for decent damage. The Elven Summoner is the latest quintessential mini-boss and boy can he be super annoying. He is immune to almost everything as well as has powerful abilities that can reflect spells and abilities back at you guys. The Telikentic Push he does can provide a problem as well, but the biggest problem is the portals he summons around the map.

The portals can be destroyed no matter which size they are by a Vortex Potion, Vortex Spell, or Vortex Lamp. Sound simple enough, but if they aren’t dealt with then portals can combine with each other and summon more enemies. These enemies can be anything from a small slime or spider all the way to a freaking cave troll and more. Many of the parties I have come into contact with while playing choose to just try to collect as much gold as possible and leave the summoner behind. Gold is very much needed to be used in the shop as well as to hire the Sellsword. I’d personally rather take down the summoner and not worry about portals but to each their own in this Demeo adventure. 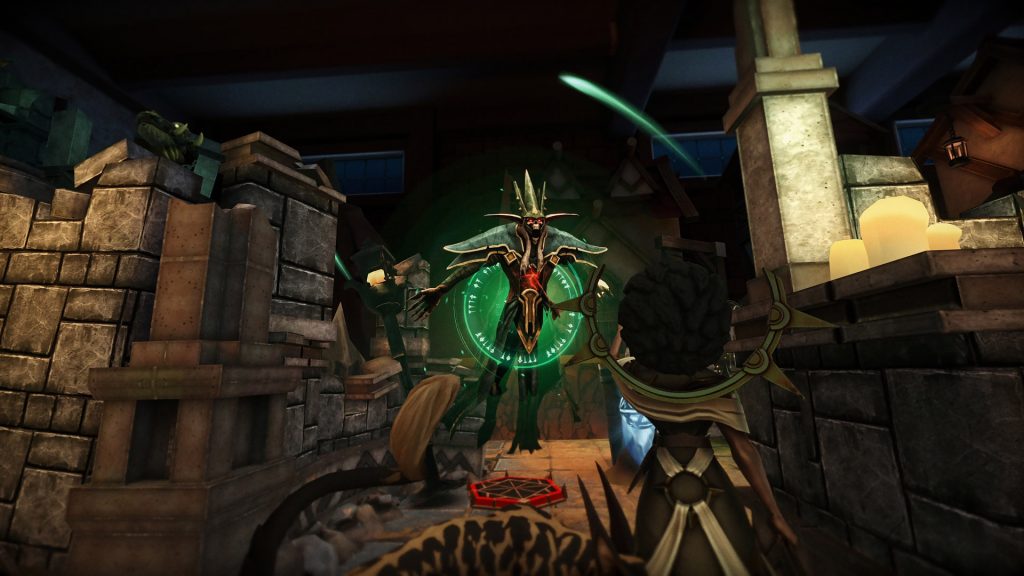 As you enter the last area in this Demeo adventure, the Mad Elven King Rackarn sits on his throne staring at you menacingly.  For the first phase, everyone should group up tight together during the first move. If you have stat-boosting potions, make sure to use all those and bulk up. If you have a hunter in your party they should probably have around 4-5 hunter marks. After the first move, 2 hands will form and move a crystal toward you and your allies. If you have the hunter like I mentioned you can mark the first crystal. Attack the crystal until it puts a hand over the crystal. The hand won’t hurt you for one round. Rinse and repeat with the other crystal. The next turn the king will get off the chair and come down to face you.

With this strategy, concentrate on destroying both crystals. After the crystals are taken out they will drop some mini hands that aren’t anything to really worry about, but you can take them out. Now you can start attacking Rackarn. If you have the special card Ralma’s Reckoning when the boss comes down to face your party, you can use that. It will deal decent damage to the boss and disable the crystal/hands while dealing damage to them as well. Once you hit the boss enough, he should go back to his chair and summon some more hands. You can attack the hands again to rinse and repeat the same strategy.

The boss might even drop some Demeo mini-bosses down to attack you. You can choose to try and ignore them while you take the crystal/hands down. Communicate with your allies and decide what to do. Now for an interesting part of the strategy to have the hands do the dirty work for you. When Rackarn comes down he will summon 3-4 hands. You will notice they have 3 different things they will do based on what the hands are doing. There will be a fist for smash. A pointing finger for a slide that deals a lot of damage. The last one is an open hand for healing.

If you manage to have one player with Invulnerability at this point have them focus on the boss hard. You could use a high-damaging Demeo character to do this too as long as they are confident in protecting themselves. The other should try to avoid damage because the hand normally will try and protect the king. They will do this by trying to kill the person beating on the boss which is why the Adamant Potion is useful here. However, the funny thing is those hands do big damage to the Rackarn himself as well.

After the potion runs out, the other players should be ready to do the final attack. At this point hopefully, you have Rackarn down to around 30 Health. Finally, focus everything you got to take Demeo’s Mad Eleven King and finish the Reign of Madness adventure. If you saved a Ralma’s Reckoning card you can use it here and should be easy to finish him off. The card isn’t required to beat Rackarn at all but helps out a lot.

Wrap-Up on Demeo Reign of Madness

This is just a small bit of information and just one strategy for how to complete Demeo’s latest adventure. People can go about it in many different ways. The first time I ran through my party was struggling to make it to Rackarn, but when we did we just beat on him and almost took him out with no cards at all really. I will be trying a few different strategies to see what’s easiest and ideal for the Reign of Madness adventure. Barbarian is definitely a must-have ally when you take on the latest adventurer. Warlock and Hunter seem very useful as well. As I said though there are many different ways to take on Rackarn and Demeo Reign of Madness.