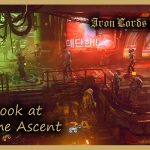 Our very own Lord Snalydo dives deep into The Ascent from developers Neon Giant. The developers kindly provided a code to showcase what the game is all about. The game is a twin-stick shooter with RPG elements that takes you into a dystopic cyberpunk underworld. In this world where corporations rule, fighting against each other is the only way to survive.

ILP First Look at The Ascent

The game was first shown off during the 2021 Xbox and Bethesda E3 live stream. The Ascent launched day and date on Xbox Game Pass for both consoles and PC.

In our review, we gave it a commendable score.  but the game was let down by some jarring technical issues and half-baked RPG mechanics. Despite this, the game was very enjoyable to play. In addition to this, the game had an amazing atmosphere and ambiance throughout the experience. The world felt actually lived in and had some impressive graphics to boost as well. You can check out Lord Snalydo’s full impressions of The Ascent here or in the video below.

Have you tried out the game? What did you think about it? Let us know in the comment section below.