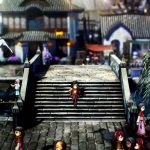 You are reading
Eiyuden Chronicle May 2022 Update

Now that Eiyuden Chronicle: Rising’s has been released and people are playing it, we can focus mainly on Eiyuden Chronicle: Hundred Heroes. We still have to wait until next fall for the next Eiyuden Chronicle game. In the meantime, you’ll still be able to get all your updates here. There were actually two updates in April mainly focused on Kickstarter backers and getting them getting their codes for Rising. So there wasn’t really an update to provide here. May is almost in the books and I am happy to say we have another good update. In this Eiyuden Chronicle update, we get a new character profile, pixel art images, Murayama’s monthly report, and some words from the team. 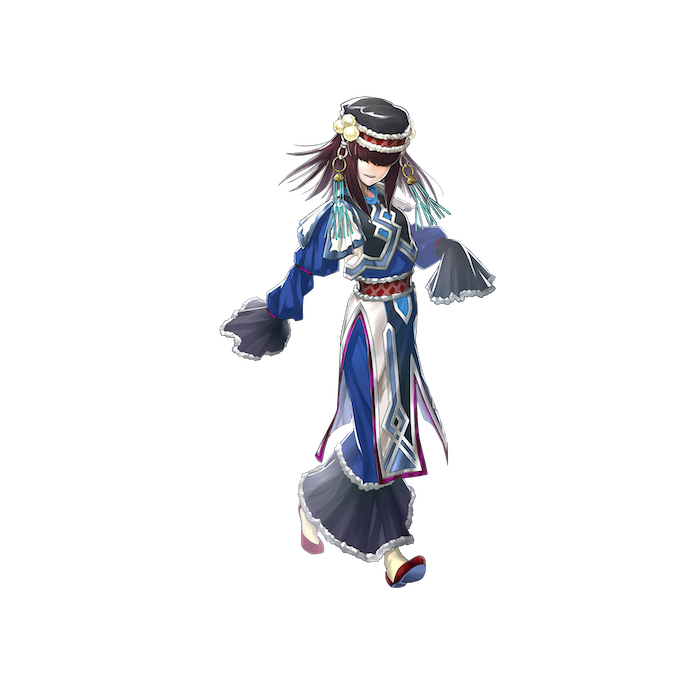 The next character that was revealed to us this time is a female named Yaelu who is 15. Yaelu hails from a reclusive settlement in the League of Nations. She is inquisitive by nature. However, she struggles to overcome her shyness and find the courage to make contact with the outside world. Her settlement uses a rune-lens to cloak itself from prying eyes. The settlement worships the lens, and it is their custom to hide their eyes behind their bangs as a sign of reverence. When it comes to seeing her speak it would be something similar to this. “Um, excuse me, I…um… I mean…do you think… Could you… Could you take me with you? I want to see what the rest of the world is like…”

When it comes to Yaelu, Kuwano said this about the Eiyuden Chronicle character:

Yaelu is someone who never, ever reveals her eyes. (Apparently it has to do with a tradition within her clan) And when I say never, EVER, I mean it! We have a lot planned for Yaelu…! Regardless of what situations she finds herself in, however, she never loses her enthusiasm, and I tried to express that in this art. 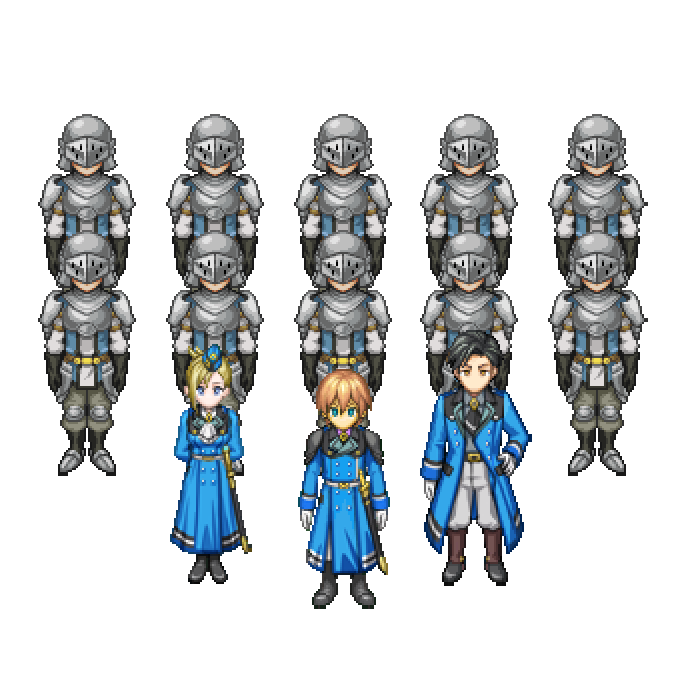 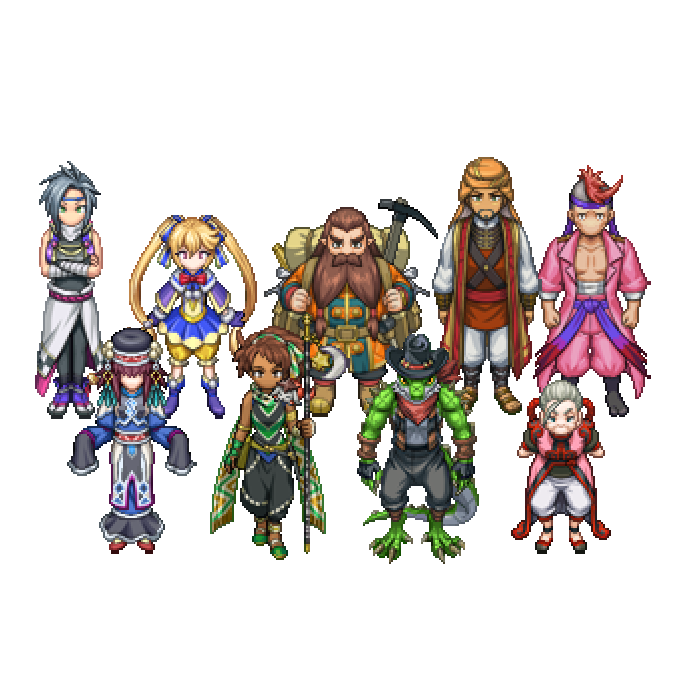 These two-pixel art images show off the amazing details that go into each Eiyuden Chronicle character. Just think that we are going to be able to experience 110 of these recruitable characters. Each with its own unique background and story to tell. I could tell who some of these are, but if you have played Rising or have read previous articles here you should know who some of them are. The images with their detailed illustrations will definitely compliment the immaculate 3D Eiyuden Chronicle world.

In his monthly report Murayama said this:

A lot of different characters appear in Eiyuden Chronicle: Hundred Heroes–not only those with big parts to play in the main story, but also those with a variety of other roles to fulfil. Party members who are capable of fighting have different characteristics, while other characters have unique abilities that will allow you to employ a variety of different strategies in the battle system. There are also ‘general’ type characters who will really shine on the field of battle. We also have characters whose roles are to manage facilities.

Some may be store owners, while others will supply the player with convenient services. On top of that, we’ve also prepared a slew of characters whose jobs are just to provide fun for the player, such as through a simple combat-oriented RPG-style mini-game and more. This motley crew of characters will all be living in the same town, which acts as your home base. We’ll also be preparing simple events and dialog that allows you to catch a glimpse into their daily lives.

Murayama added to that by saying:

Therefore, in order to make all that happen, we’re currently exchanging ideas and figuring out how the different characters’ relationships will work. Do these two go out fishing together? Do these two have fun talking about love? Are these two rivals? And so on, and so forth.It’s too much of a job for me to handle all by myself, so I’m collecting ideas from my staff members as well.

They’re coming up with a lot of fun ideas and combinations that I would never have been able to come up with on my own. The surprises are a lot of fun to discover, and I truly feel like this is an important step that will allow us to pour even more depth into the world and its characters.I hope you’re all also having fun imagining things on your own!

This month Komuta from the team wanted to say this:

Last month, you got a glimpse into the team’s daily life, so I should probably give you a glimpse into what’s happening on the development side of things, huh? Walking around the map that connects the world together there is alot you can do like checking out towns, dungeons, and fighting enemies. Not to mention also buying things in shops, dueling and sparring, fishing, playing with tops, etc.

There’s a lot to do in Eiyuden Chronicle: Hundred Heroes. Through working on the prototype, we’ve been able to pinpoint the issues and things we need to work on. As well as define what the player ‘can’ and ‘can’t’ do in the game. What must we keep, and what must we drop in the limited time we’ve got left? Is it really okay to just drop and cut the things we can’t make?

Every day, we’re faced with hard decisions about a variety of things. Sometimes we’re not sure what decision to make. In times like that, we try to focus back on what the core concept of Eiyuden Chronicle: Hundred Heroes is.

Naturally, with the battles we’ve planned and worked on, we have strived to give individuality to the animations and abilities for each battle-ready character. I’ve spent a lot of time planning out each character so that they function and fight the way we envision them to. Murayama-san thinks up the characters then Kawano-san gives them form with her illustrations. Next J-san and the character team allows them to move using pixel art, then the planner team gives them roles within the game. Then, finally, at least one character is born. (And we have to do this over 100 times! LOL)

Each time we get a new character profile it is one of my favorite times to provide these updates. I always enjoy seeing what type of character I am going to be taking along for the ride in Eiyuden Chronicle: Hundred Heroes. I’ve been excited since day one of the Kickstarter when I backed it. After seeing the first three main characters revealed I was hooked. I know Murayama and the team will provide an amazing game, especially with the knowledge of the previous titles developed such as the Suikoden series.

Before I forget there was also a special announcement that Eiyuden Chronicle: Hundred Heroes is finally confirmed for the Nintendo Switch. I saved that little bit of information for last. When Eiyuden Chronicle: Hundred Heroes releases you can experience it on all platforms now. Don’t forget you can also play it in Game Pass on day one. Believe me when I say there is a lot more great information about the game already revealed.